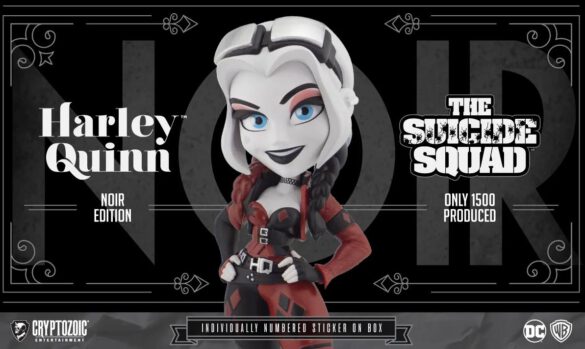 Cryptozoic has announced a new edition of their previously released The Suicide Squad Harley Quinn figure featuring a noir color scheme. The figure stands over seven inches tall and features a muted color scheme compared to the original release. The figure was originally an exclusive announced at New York Comic Con. It is priced at $39.99 and is expected to ship right away. You can order exclusively from Cryptozoic now.

She’s dying to take a walk on the Noir side! Like the previous releases in Cryptozoic’s extremely popular Noir Edition series, this limited edition variant sports a stylish gray color scheme inspired by the timeless look of film noir. The 7.5-inch collectible comes packaged in a window box with a unique design and sticker, which is individually numbered.

KEY FEATURES: Limited Edition variant of Harley Quinn The Suicide Movie Collectible vinyl figure. Based on the portrayal of Harley Quinn in the film The Suicide Squad (2021). Display-worthy window box packaging with unique design and sticker. Individually numbered on a sticker on the box out of 1500.

CONTENTS: One 7.5” vinyl figure. Packaged in a display-worthy window box.