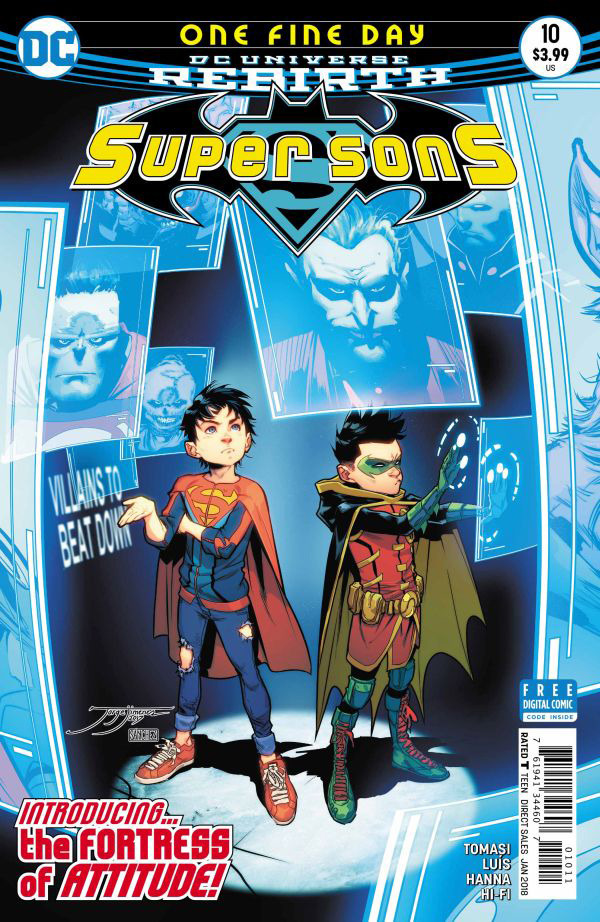 Overview: Robin and Superboy get a new headquarters, and the Batman of Tomorrow is revealed.

Synopsis (spoilers ahead): The issue opens with Bruce, Clark, Damian and Jon gathered for Jon’s first fly test, which is a success. He then sees a robbery in progress in Gotham City and asks Bruce for permission to stop it. Bruce allows him. After getting some advice from Clark on how to engage, Jon sets out, flying almost as fast as his father.

Bruce, Clark and Damian take Clark’s pickup truck to head back home. Clark and Bruce consider restricting the time the boys get to spend adventuring around. Jon returns and meets them halfway, landing on the truck bed to change back to his civilian clothes. Damian jumps out of the cabin of the truck and joins him on the back.

Deciding to show Damian how important the day was to him, Jon climbs on top of the car and pulls Damian with him. Belly down, arms stretched out, Jon reminds Damian how incredible it is to fly, a power he had for a brief time after returning from Apokolips.

The issue is then interrupted by an intermezzo. This is the future. Gotham City is in flames and a Batman figure is emerging from debris. This is Damian as Batman in the iteration built by Grant Morrison for Batman #666. His last resource to escape the final darkness is “one more resurrection… one more rebirth…” The interlude ends with Bat-Damian declaring that the apocalypse is back on.

Back in the present, three weeks later. Superman returns home from building something with Batman. It is late at night. He wakes Jon up and tells him to get dressed. Meanwhile, in Gotham, Batman goes get Damian out of bed, only to find the boy already in his Robin uniform, perched on top of the door and waiting for him.

In an amphibious vehicle, Batman and Robin head to the new headquarters built for the boys. Superman and Superboy are already there. Jon is beaming with excitement and names it the Fortress of Attitude. Damian is not only firmly against the naming of the place, but he is also hesitant about the facility. “I know my father too well. There has to be a catch.”

Batman and Superman give the boys a tour of the place. Their systems are linked to the Watchtower and “class-4 and below” emergencies are to be sidelined to their system. After the tour is ended, Bruce reveals what the “catch” was for Damian: the boy will start attending regular school in Metropolis. He is not happy about it, but Batman sets the rules. No school, no Robin.

While Damian and Jon argue whether the news is great or horrendous, Batman and Superman leave the headquarters. Shortly after, Superboy and Robin get their first mission, stopping the attack of a giant green monster in Metropolis.

Analysis: Five issue ago we had an exposition story in Super Sons #5. This issue follows roughly the same structure as the previous one: the boys are shown in their homes as a way of contrasting them, a small conflict ensues, Superman and Batman are involved and, by the end, the boys are shown together in action. Despite that, while issue #5 reads as a fun, well-built one-shot, this issue felt flat and the pacing bumpy.

The opening sequence is heartwarming and an incredible chance to show the reader that Damian still puts himself in a mentor position with Jon. It had the potential of being memorable, but the dialogue often felt unnatural and rigid. The very first page shows Bruce making comments that, while perfectly reasonable, are awkward when the subject in question is standing right beside him. While the characterization remains true to the characters, the whole scene had an unrealistic feel because of the context. A testament to how their friendship is amazing for the boys, the truck sequence is the high point of the issue. Tomasi always excels in conveying this in subtle ways, more showing than telling. Before we get to the domestic scenes that follow, though, we have an instigating but poorly placed interlude. The doomsday feel of Bat-Damian’s Gotham not only loses its power for not being an epilogue instead of an interlude, but it breaks the pacing of the main plot. Morrison established a very peculiar canon which was mostly ignored or erased all through the New 52, but is now coming back full force with Metal and Super Sons of Tomorrow, the crossover event that will start next month. What comes after the that feels disconnected and less important than Gotham going up in flames. The problem is, what comes next should be the main event, the one that names the issue. Not only that, but the interlude is also the high point of Jose Luis, his art falling into an inconsistent pattern right after. I found myself torn between admiring his highly detailed backgrounds – which are perfect for presenting us the new headquarters -, and being put off by the slightly uncanny feel of the characters when they are making faces, especially Robin. Despite that, his children do look like children, which is an absolute must for this title.

For the Easter-egg hunters out there, Morrison Bay does not exist in reality and Jon has the cover of Superboy and the Ravers #15 up on his wall, with Conner Kent as Superboy. A Krypto photograph and a Teen Titans skateboard can also be seen in his bedroom. Final Thoughts: Despite the usual great characterization by Tomasi, the pacing of this issue is off. The inconsistency of the art increases the unsteady feeling of the storytelling, while a misplaced interlude breaks an otherwise natural transition from the first to the second moment of the story. Nonetheless, it builds the expectation for the upcoming crossover event, Super Sons of Tomorrow.