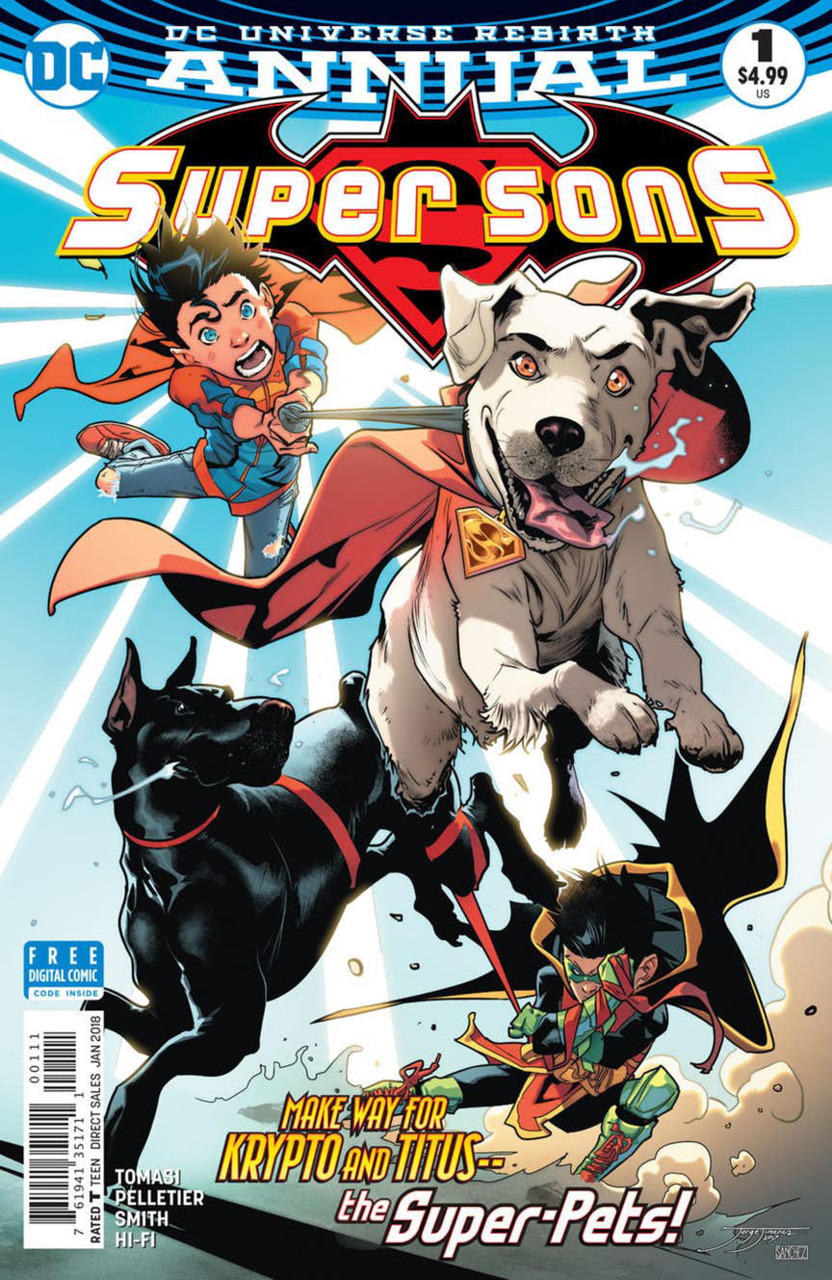 Overview: The Super-Pets reunite to investigate the mysterious disappearance of dogs in Gotham.

Synopsis (spoilers ahead): The reports of dogs disappearing are rising on Gotham, but the Super Sons have a case which happens to take priority over this one at the moment: stopping a heist in New York. The boys succesfully stop the bank robbers and get a couple of veggie kebabs as reward from a street vendor. Damian gives Jon a ride home on his helicopter, but refuses him a high five. Or a fist bump.

Jon gets home to find Krypto waiting for him. He goes over to a bulletin board where he keeps track of the cases he wants to work with Robin and crosses the NY heists. On its side there is a “Dog Gone Gotham” newspaper clip, and Krypto catches sight of it.

He waits for Jon to fall asleep and flies over to Wayne Manor, where he meets Bat-Cow. She promptly moos to summon Titus, who is sleeping beside Ace in the living room. The Great Dane goes out to meet Krypto and Bat-Cow, and Krypto shows them why he is there: the “rash of dog-nappings”, as can be read on the clip he stole from Jon.

Bat-Cow promptly arrives with a leash for Krypto to carry Titus while flying. Their next stop is Detective Chimp’s home base. They are there to try to get the Super-Pets back together, a group made up by Bat-Hound, Clay Critter, Krypto, Batcow, Streaky and Flexi, the Plastic Bird. Reluctantly, Detective Chimp tells them where to find Streaky, the Supercat, in the place where she meets Flexi for a drink every Wendesday night.

They meet Streaky by a fountain in a public park. There, Krypto remembers their  last case against the Red Lantern pets, when they lost Clay Critter. Streaky lashes out at Krypto, but Titus stops the fight. In his own dog way, he explains to Streaky why they have come after her. She is reluctant.

At this moment, Flexi comes flying. He also lashes out at Krypto, standing at Streaky’s side. Titus once again steps in to calm the tempers, but Streaky still refuses to join them on one last case. Joined by Flexi, Titus and Krypto fly off to investigate where the missing dogs might have gone.

What they find is a space ship standing in the middle of a corn field where all of the dogs are being kept. They enter through a hole Krypto makes on the hull, but the dogs start going after Flexi. He turns into a bear and scares them off, while Krypto and Titus try to bring some order to the place by barking their lungs out.

A white van parks beside the ship, a green alien driving it. He is bringing more dogs.  His name is The Stranger and he proclaims himself to be a savior of “cute and fuzzy” creatures around the galaxy. Krypto leads a charge against the vehicle, Flexi quickly joining him. Bat-Cow and Sparky also turn up, stopping the alien from running. Titus releases the dogs and uses some typical Bat intimidation to scare The Stranger, who gets apprehended and the dogs are all released.

Next morning, Damian wakes up to find all of the missing dogs on the grounds of Wayne Manor. He calls Jon for help, they need to get all of the dogs back to their owners.

Analysis: The pet sidekicks are often either laughed off or ignored, seen solely as Silver-Age silliness. Peter Tomasi once again proves that all of that seemingly nonsense can be in fact worked to extremely fun concepts. He has recently successfully brought back the Forgotten Villains, and now he does the same with the Legion of Super-Pets.

The secret here is treating the pets as any other anthropomorphic character, while still keeping them as animals. Before the team gets face-to-face with the villain, Tomasi makes sure to build their background and give the reader some king of understanding on who they are. As a team, they are given a past, former foes, a group dynamic of their own. Their last case went awry, they lost a member of the team, there is unresolved issues between individual members. As individual characters, each pet is unique.

Krypo is portrayed as impulsive and stubborn, but it is also the one to reach out for the team members when their work is needed. Streaky, being a cat, is proud but also loyal, meeting with Flexi regularly even after the group ceased to be. Flexi is obviously Plastic Man’s pet, stretchy and goofy. Bat-Cow plays a little like Alfred, coming out of nowhere in classic Bat style with the help needed. Titus, being the Bat-Hound, is the reasonable one, who tries to diffuse the situation between Streaky and Titus. Despite being the one with no powers, he can be extremely intimidating, a trait he shares with his namesakes. The challenge of this issue lies not only in writing animals interacting with each other in a believable way, but in being able to convey their actions and emotions with little more than body language. Paul Pelletier meets the challenge with grace. The level of expression on the faces of the animals is enough to make us read their intentions even without the use of words, despite the extensive use of barks and moos in word balloons. Another element that makes this issue even more of a valid reading is how Tomasi is attentive to details. He chose Titus to be his Bat-Hound, but he did not ignore Ace’s existence in current canon. He also acknowledges Damian being a vegetarian, the street vendor giving the boys veggie kebabs instead of regular ones. The only piece that is missing – and here my fangirl side shines through – was the possible addition of Goliath to the team.

Final Thoughts: Lighthearted and joyful, the Super-Pets might well become more popular than the Justice League in years to come.