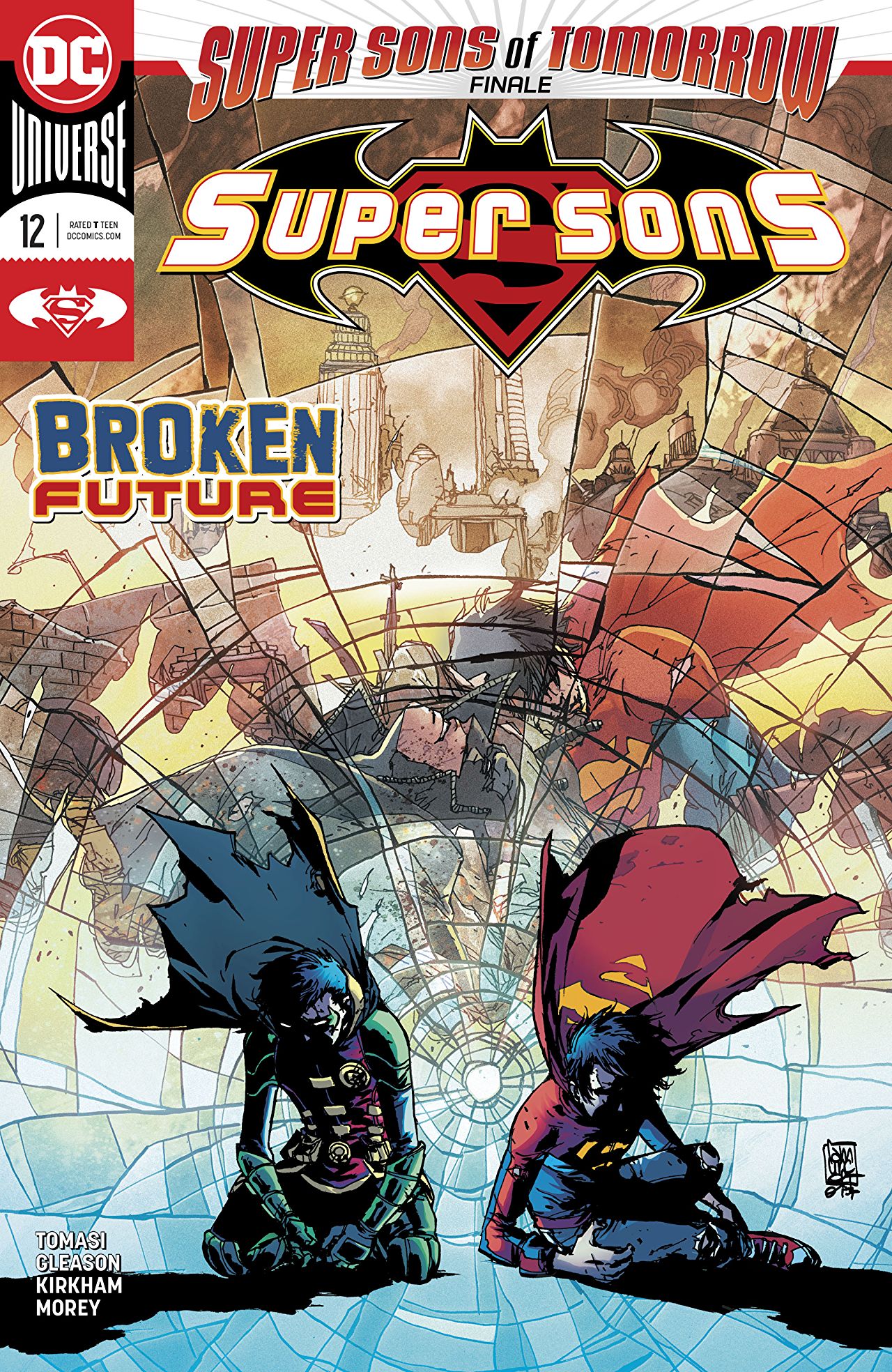 Overview: The Teen Titans have to deal with the aftermath of Tim Drake’s suicidal mission.

Editor’s Note: This is the fifth and final part of the Super Sons of Tomorrow crossover that takes place in many TBU titles. The story has been told  in these issues: Superman #37, Super Sons #11, Teen Titans #15 and Superman #38.

Synopsis (spoilers ahead): The previous issue of Super Sons of Tomorrow ended with Savior sacrificing himself in order to contain the solar flare emitted by Superboy. The finale of the event opens with the Teen Titans and the Titans of the future, standing outside the Fortress of Solitude, as they watch Tim Drake get swallowed by the timeline. He is now dislodged in time and the multiverse, “ready to do battle with anyone or anything that endangers the timeline.”

Right as Tim disappears, Superman turns to the Titans of the future – Bart Allen Flash, Cassie Sandsmark Wonder Woman, and Conner Kent Superman – and questions them about their intentions. Conner dodges answering, telling Clark that “when it comes to time-travel and alternate realities, the less we say and do–the better’, advice Clark himself gave him once. With that said, Bart takes them back to their own time and dimension.

They all seem pretty unfazed about the whole deal, until Raven reminds them that Tim Drake just sacrificed himself in front of them. As the Teen Titans try to deal with the whiplash of that, Superman takes Superboy and Robin to the Fortress to speak to them.

Clark tells the boys that he is reconsidering their partnership. He is taking into consideration what Tim Drake revealed to them, that something involving Damian will lead to the undoing of Jon in the future. He is worried about the future of both boys. Damian and Jon argue that their paths are theirs to decide, and that, if anything, the fact that Tim came to their reality and absorbed the solar flare already altered the future.

Meanwhile, in Wayne Manor, Bruce wakes up to find himself all patched up from his fight with Tim.

Superman, Superboy and Robin come out of the Fortress to meet the Teen Titans. Starfire reports to Robin that they need a proper meeting to discuss how easily Savior not only infiltrated their systems easily, but also managed to fracture the team. Since the Tower got destroyed, Superman offers the meeting room in the Watchtower for them to gather.

As each member of the Teen Titans takes a chair, Jon excuses himself so that they can have their meeting. Robin jumps the gun and calls the meeting before Jon leaves, putting forward a voting for Jon to become a half-member of the team. The vote is taken with Jon in the room, but the Titans vote for nay, since they still have to discuss where the team stands.

Analysis: In the world of architecture, certain buildings can be called Decorated Sheds when analyzed under a specific light. The term coined by Robert Venturi and Denise Scott Brown in their book Learning from Las Vegas applies to buildings “Where systems of space and structure are directly at the service of program, and ornament is applied independently.” Meaning, those are generic boxes, one-fits-all, to which some decór is added to make them look unique. The ornaments, in the case of old Las Vegas, were the neon signs, designed to catch the attention of passers-by. Crossover events are, in a way, the Decorated Sheds of the world of comics. Super Sons of Tomorrow, despite being built with quality materials after the design of some competent architects, does not escape the rule.

Now that it has come to an end, the formulaic nature of the event is made even clearer: a big threat comes, raising the need for some teams and characters to get together to face it; there is some difficulties, but the threat is neutralized by the end, and not much changes. Events are mostly about those flashy neon signs attached to a comic to make them sell more. With Super Sons of Tomorrow, those signs initially read: Damian-Batman! First appearance of Jon as Superman! The Super Sons standing against the Teen Titans! Those signs were taken down fairly quickly though, replaced by: Multiverse! Future Tim Drake is still evil! Conner Kent, Cassie Sandsmark and Bart Allen return!

And then, it wasn’t about the Super Sons anymore. Except for this final issue, which brings the focus back to Superboy and Robin, the whole event was more about Savior. Future-Tim gets a full redemption arc, something that went absent in his recent Detective Comics story. Lost in time and with a new persona, he is now all set for whatever it is that Geoff Johns has planned for him since the beginning of Rebirth. In the end, this felt like the main purpose for this event. Nonetheless, as mentioned, this final issue brings Robin and Superboy back to the position of leading characters. It is made clear that, while the Teen Titans are his team, Damian’s allegiance lies with Jon. One of the better executed scenes of the issue is the vote. In a perfect characterization of his brash and over-confident nature, Damian practically demands for the team to take Jon in. Kirkham’s faces are rarely as expressive as Damian is in this panel, though his Starfire remains oddly blank-faced all through the issue. And then there is Rob Leigh, cutting the bright-yellow sound effect around Damian’s hands to make it look as if it were behind them, adding dimension to the art. Not only does this scene work well, it will probably set the tone for the following issues of both the Teen Titans and Super Sons. To have a scene focusing on the team and the boys as the conclusion for this oddly constructed event was an asserted choice, in that it brought the lights back to what it was originally meant to be focusing on: the Super Sons.

Final Thoughts: While the event itself did not deliver what it advertised, this one final issue raises the stakes for the future of the young members of the DC Universe.