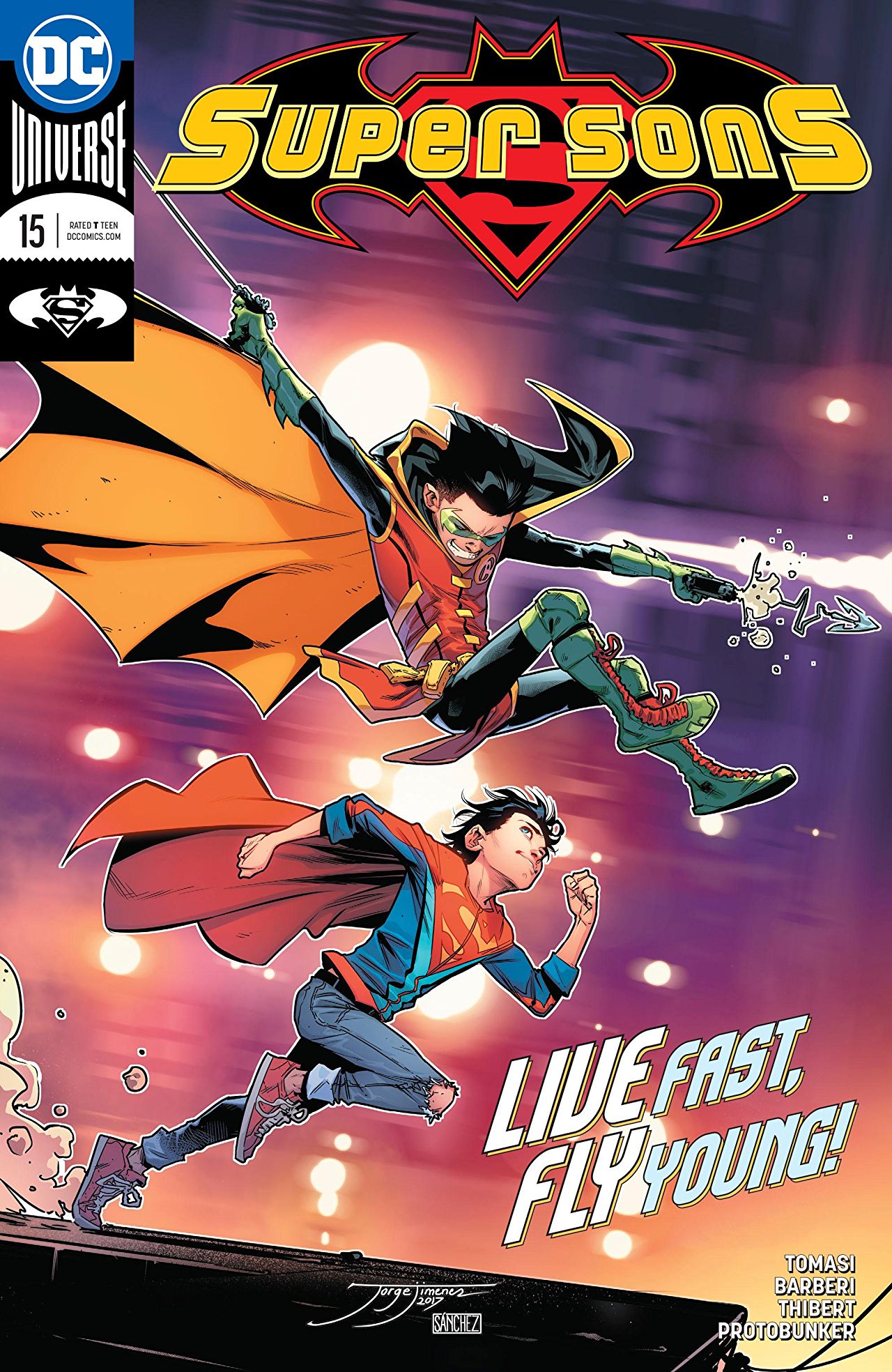 Overview: Before enjoying a quiet of patrolling Metropolis and Gotham City, Superboy and Robin are attacked in their underwater headquarters by Kid Amazo. Kid Amazo reveals his escape from LexCorp and his subsequent plans for the Justice League.

Synopsis (spoilers ahead): The issue opens at LexCorp where two scientists discover that a patient has escaped due to a lapse in security. Later, under the waters of Morrison Bay, Jon arrives via submarine to the base. He interrupts Damian’s workout with a few tricks he picked up from other League members. The two bicker for a few moments before Jon sees a shape moving at the base. Crashing in through the wall is Kid Amazo, who is revealed to be the escaped patient from the start of the issue.

Once Kid Amazo breaches the walls, the headquarters begin to take on water and flood. Superboy attempts to hold off Kid Amazo until Damian can find their experimental underwater breathers. Amazo beats back Jon but quickly gets taken down from a jettisoned pod. The boys swim to the surface but Jon is stolen just before they reach it. Damian then teams up with Cyborg to find Superboy and take down Kid Amazo.

Meanwhile, Kid Amazo takes Jon elsewhere and begins to reveal his escape from LexCorp. He explains that Luthor tried to separate him from his original host, Reggie. Amazo then tells Jon that he broke out of his cell and reused the other boy as a battery to take his life force to power himself. Although a weak host, Amazo was able to escape and begin monitoring Superboy and Robin. Jon furiously lashes out at Kid Amazo who puts him down quickly while revealing that he has captured some prominent League members such as Batman, Superman, and Wonder Woman. Amazo’s ultimate plan is finally revealed as he intended to siphon off the full organic energy of the entirety of the Justice League.

Analysis: As a start to a new arc surrounding the Super Sons, it definitely had a very action-packed beginning. The issue does not even give you time to get caught up but launches into an explosive break-in scene. With only one minor nitpick I had with the issue, it was an enjoyable read and gets the ball rolling on this new arc.

Tomasi continues to capture the true natures of these young heroes but also stays true to their actual age and maturity level. It is always fun to get scenes of Damian acting just like Bruce and then Jon use his Superman-ish powers in a very childish way to annoy the brooding teenager. The dialogue is always on point and we get to see these two have a true friendship that each is willing to sacrifice themselves for. The scene of the two swimming to the surface after their underwater headquarters is attacked was done very well, both in artwork and writing, to make it a suspenseful scene where Damian is willing to drown to make one last attempt to reach his friend.

The only thing I felt may have been dragged on too long would be the underwater fight. I would have preferred the time spent this action to have been spent towards more explanation of Kid Amazo or his escape. Again, as I stated earlier, this was a very minor nitpick in an otherwise exciting and action-packed issue.

Final Thoughts: Overall, the writing and artwork continue to keep Super Sons a must read for me every month and this story gets to involve the Justice League so some good father/son crossover looks to be imminent which has led to great scenes in previous arcs.