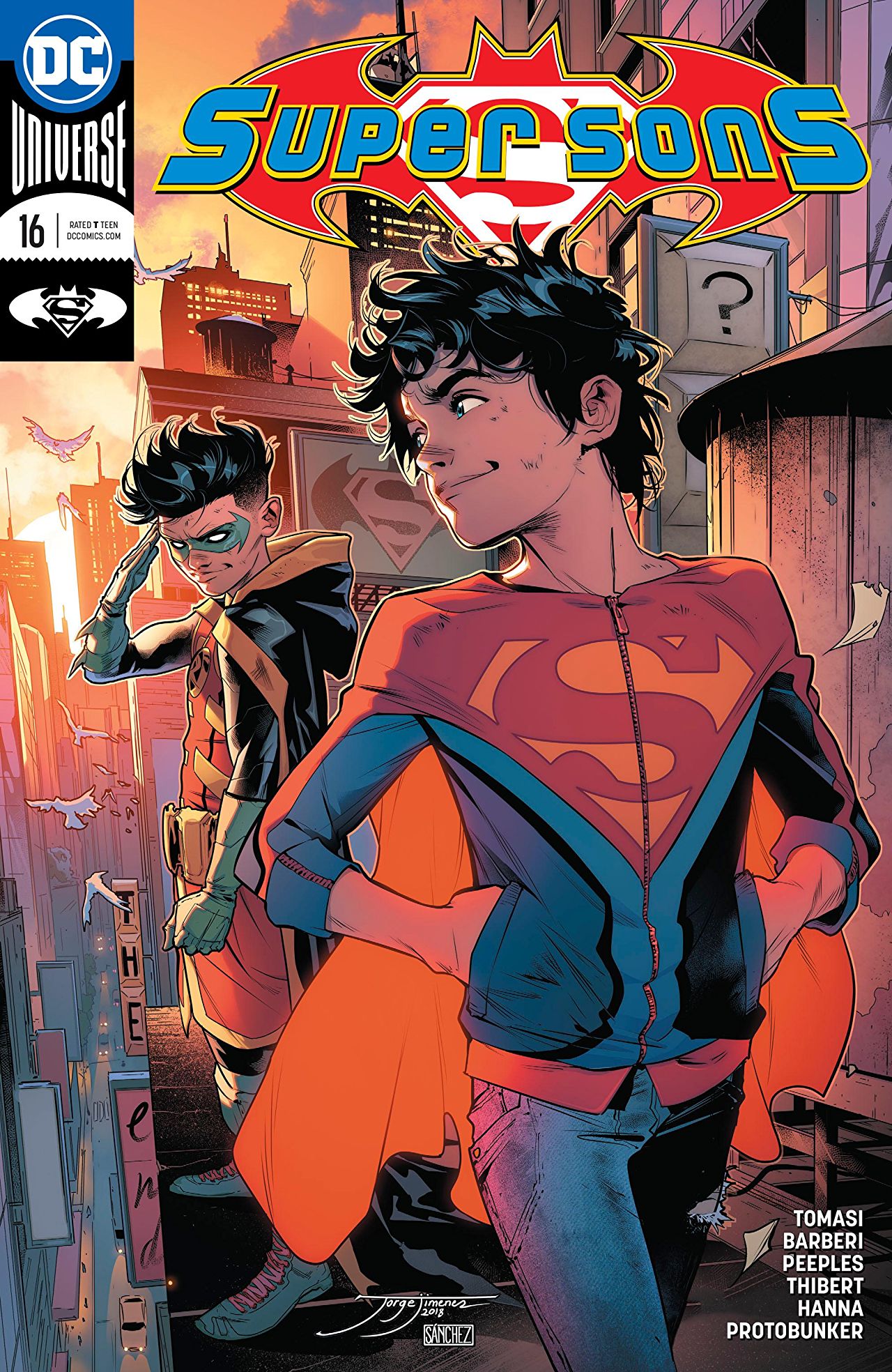 Overview: The final issue of Super Sons has arrived and the boys need to stop Kid Amazon before all is said and done.

Synopsis (spoilers ahead): Kid Amazo has captured the Justice League and it’s up to Superboy and Robin to rescue their mentors. They must stop the enemy who brought them together before he can harness the League’s powers for his own diabolical purposes. Jon and Damian are able to trick Kid Amazo into accessing Cyborg’s mainframe. Using a “stop Cyborg” contingency plan found in Batman’s armor, Kid Amazo is trapped. The League is freed and the Super Sons earn the respect of their fathers.

Analysis: The best part of Super Sons continues to be the banter between Damian and Jon. These two characters could entertain me with their dialogue no matter what the story backdrop is.

Now that we are at the end of the series (or at least this volume of it), we’ve seen how the boys have rubbed off on one another. Robin trusts Superboy more and seems a bit more humbled when being thanked by their parents at the end. Superboy is also holding his own against Robin’s quips now. At the beginning of this series, he mostly reacted to them instead of bantering back. When friends spend enough time with each other, they begin to absorb parts of the other’s personality, and I can see that happening here.

DC readers who remember “Tower of Babel”, will be amused to see that Damian and Jon use Batman’s “take down the League” plan to save the day. Closing the series with Kid Amazo, their first true villain, was a nice touch. Unfortunately, he was almost an afterthought. Once they shut him down inside Cybrog’s mainframe, he ceases to get any real closure from the plot. He just kind of anticlimactically goes away.

The art was fun and dynamic. There are a few panels of Jon Kent charging into battle that does a great job of conveying action within a still image. The colors are bright and cartoony, which help complement the fun tone of the series.

Body language and facial expressions are executed nicely by the art team. Damian and Jon almost never have the same look on their faces. There is a wide spectrum of human emotion that the team is able to convey to the boys. If you go back and look at the art, you’ll appreciate that along with the awkward body language that goes with being an angsty youth. I especially love the smugness in Damian’s face on the second to last page.

After much fanfare of Superman’s trunks returning, he is seen here without them. An editor’s note assures us that this takes place before Action Comics #1000.

Final Thoughts: I agree with the Super Grandkids; I want to know what happens next. This series was a fun twist on the World’s Finest dynamic and a great book for young readers looking to get into the greater DC Universe. I’m counting down the days until the next volume.