Review: Adventures of the Super Sons #2 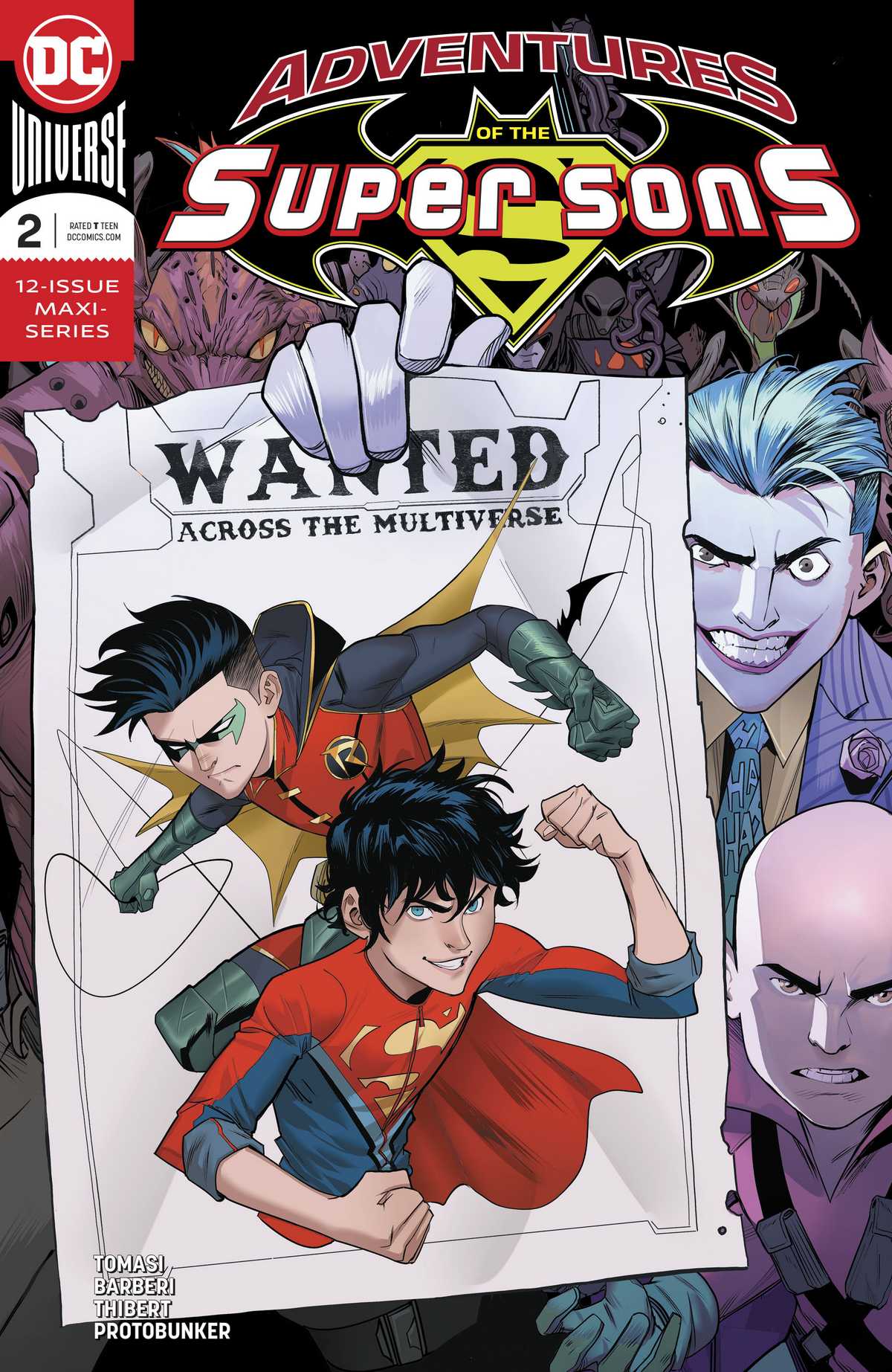 Overview: Two sides of Jon’s personality are shown that have never been seen before.

Synopsis (spoilers ahead): Rex punches Jon in the stomach, hoping to weaken him more. To his and Jon’s amazement, his punch did not connect. Jon realized that his dad put a hard light force field generator in Jon’s belt. Although this confuses Rex for a second, he decides that he could incapacitate him the old fashioned way, with a left hook to the face. As The Gang collects their gear and their prisoners, Joker Jr. whispers to Damian that all is what is not what it seems. He needs his help. Before Damian can respond, he binds him again.

At the Fortress of Solitude, Puppeteer is in masterful control of Jon. Rex tells Jon that they needed his body so that the Fortress’ defenses would be deactivated. Jon, via the Puppeteer, retrieves the hyper-cube from the vault. Rex explains that the hyper-cube lets one travel across all eight dimensions. Now, they must be on their way to recruit more villains to their cause.

Joker Jr. takes Jon back to the cell where Damian is. He releases Damian and explains he will buy Damian some time so that he can restore Jon’s Kryptonian powers. Damian gives him twenty seconds to explain what is going on or he will beat him to a pulp.

Joker Jr. explains the legend of Earth’s heroes extends further than anyone would have thought. For his race of people, there is no better entertainment than watching each member of the Justice League face off against their Rogue’s Gallery. In particular, he and his friends were captivated by the heroes’ exploits. One of his friends realized that their society was teetering on the edge of despair. It just needed a catalyst to fall into ruins, and from there, their great society can be rebuilt. One night, one of these kids realized that for their dreams to come true, they needed to retrieve a hyper-cube. This friend is Rex. He was so obsessed he sought to create a loyal following. Rex killed his parents (hoping to push him into insanity) and when that did not work, he tried to drown him in chemicals.

Joker Jr. gives Damian the radiation box that weakened Jon. He overheard Brainiac 6 say that the effects could be reversed. He is going to try and buy Damian time to fix Jon. Rex realizes that Joker Jr. had turned on them, and orders his team to check the jail cells. Before they could arrive, Damian hurries to try to give Jon his strength back. He changes the frequency of the radiation and asks Jon if it worked. Jon says that it feels like he is being ripped in to. When Rex and the other come in, they see Jon split in two; Red Jon and Blue Jon.

Analysis: I was extremely hesitant about this series, but this issue eased some of my worries. It is definitely better than the last.

I like how The Gang is not young versions of Earth’s villains from an alternate dimension. Rex is the crazy one in the group, not Joker Jr; even if does not realize it though.

The art by Carlo Barberi, Art Thibert, Protobunker, and Rob Leigh really fits this book. They do a great job of keeping it fun and light amid a pretty dark story.

Final Thoughts: This issue got me re-engaged with this series. Let’s hope the third issue keeps up the momentum.