Review: Adventures of the Super Sons #3 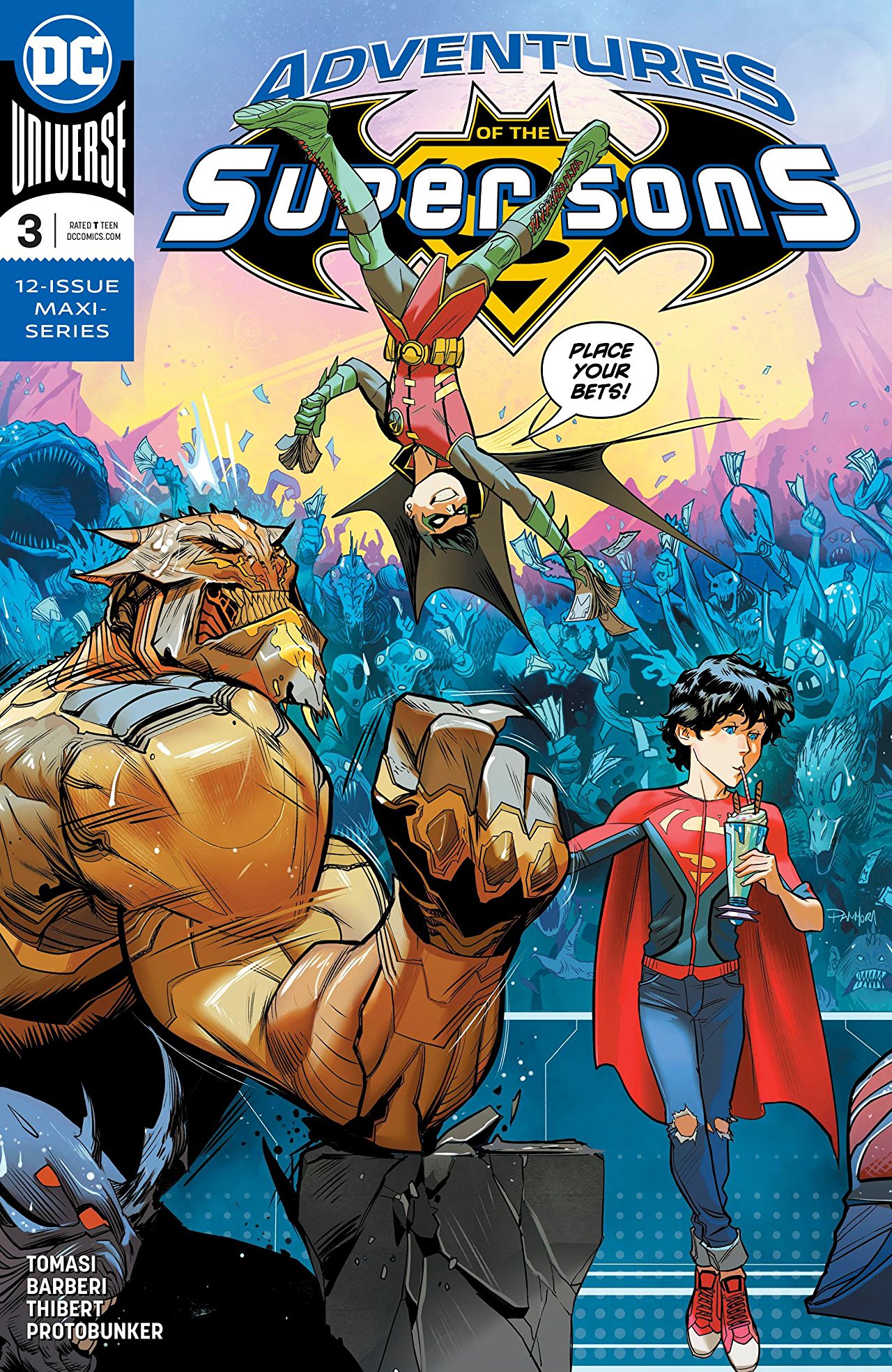 Overview: After being split into two versions of himself, Superboy must get control of his selves to help Robin battle a team of alien child supervillains.

Synopsis (spoilers ahead): The issue begins with Kid Joker running away from the rest of the child supervillains. He is getting comfortable with being away from his former friends obsessed with super villains when he is shot out of the sky by Kid Deadshot Deadshot lets Rex Luthor know about the Kid Joker’s apparent demise. The villains turn their attention back to the Super Sons, now with an additional member due to a Kryptonite-powered device that has split Jon into red and blue versions of himself.

Robin is having his hands full with trying to get both versions of Superboy to work together to bring down the multitude of villains they are up against aboard the alien craft. Robin heads towards the bridge of the ship to try and get control of the ship away from Rex. Despite constant bickering, the super boys are able to put aside their differences to take down a few of their new villains.

After the main door is broken on the vessel, the entire ship begins to go into full free fall. Robin, despite not understanding alien tech, orders the super boys to help slow the ship’s descent. The pair tries to ignore the obvious metaphor coming to life as they both take one end of the ship as it speeds towards the planet’s surface. They are able to slow the ship enough as it makes a rough landing.

The heroic actions take their toll on Blue Superboy and he is almost dead as the villains surround the heroes when Space Cabbie and Kid Joker, revealed to be alive, arrive to give them a lift out of the sticky situation.

Analysis: Coming into the series at this point, I was a little confused, but there is a little recap bubble at the beginning of the book which I found very helpful. I know the podcast has discussed this before about DC doing some type of recap for issues. Marvel usually does a little longer recap section and that’s probably why DC does not do it but this little intro was perfectly sufficient so maybe its something they will explore for other titles.

It is a crazy, wacky story that takes elements from some of the older, more bizarre Superman storylines (ex: Red/Blue versions) and updates them with fun humor and action. I get a feeling that this is a title that is certainly aimed at a younger demographic but that an older crowd with previous comic history knowledge can enjoy. The young aliens emulating Earth’s worst supervillains is hilarious at times to see them spouting off villainous statements while visually appearing to be no threat.

Tomasi takes these outrageous elements and continues to deliver witty dialogue between Robin and the Superboys. There does not need to be a lot of depth to the story but its fun to see Superboy arguing with himself and Robin trying to play mediator.

The artwork had its moments at times that both excelled and struggled with the multitude of characters and action. There were certain times where. It was a little too much cartoony action packed into a panel where it made it difficult to figure out what was happening. At the same time, you have great panels depicting the Superboys battling the villains in unison which was fun to see.

Final Thoughts: Overall, it is a fun read and although I am not in the target audience, I am looking forward to seeing where it goes from here.