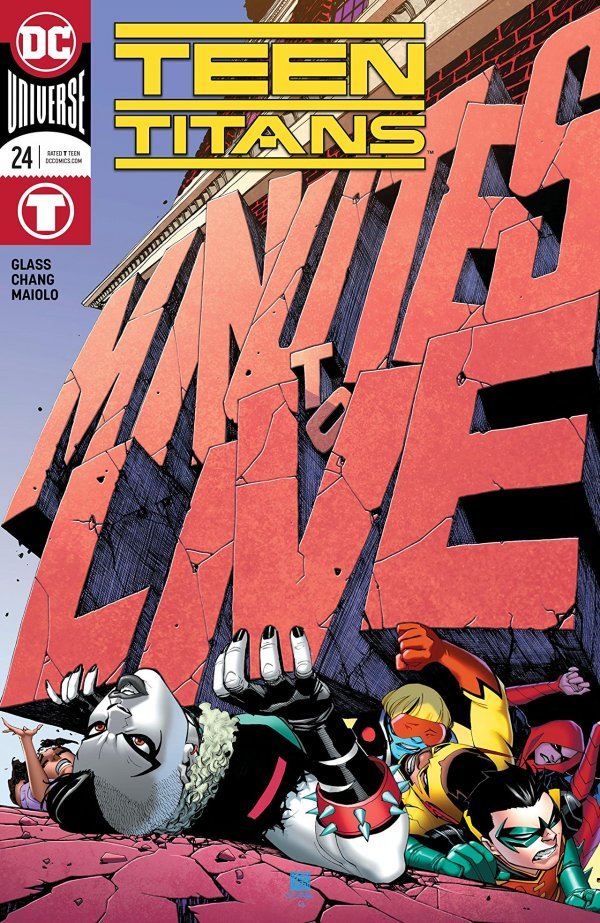 Overview: The team’s trust is put to the test as a building threatens to collapse on top of them.

Synopsis (spoilers ahead): The Teen Titans try to recover and get their bearings following the explosion.  Everyone is down, but Crush is holding up what’s left of the building so it doesn’t crush her team members.  Kid Flash’s leg has been impaled by a metal support and Robin tries to look for Djinn. While Robin and Red Arrow check and see if Djinn is ok, Kid Flash bombards Robin with questions about the source of his information because he believes they were tricked.  Robin deflects the questions and Red Arrow tells Kid Flash to focus on the situation at hand.  Djinn regains consciousness and apologizes for not doing more to shield them from the blast.  The team asks her to help them now, but she gives a complicated and guarded explanation for why she can’t.  The whole team tries to convince her otherwise, but she still refuses.

As Crush tires from holding the building up, she gives the team a no-nonsense speech that rallies them and gets Robin to come up with a plan.  The team decides to go down through the sewers instead of up.  The execution of the plan is less than stellar, but the team’s instincts serve them well and it all works out.

Back at the Teen Titans HQ, the team tries to wash off the sewer stink and get back to “normal” teenage life.  However, Red Arrow decides to visit Djinn’s room to get the truth about why she refused to help them.  When Red Arrow gets aggressive, Djinn transforms into a darker mystical being that easily throws Red Arrow across the room.  Emiko later wakes up in her own bed and wonders if it was all a dream.

Analysis: While this issue is kind of an interlude from the main story, it is full of tension and intrigue.  In the last issue, we saw the team have a moment together standing on a rooftop where they really came together.  It’s easy for people to have those moments when it’s just talking, and this issue puts it to the test right away.  In a life-threatening situation, we start to see some of the old cracks and mistrust start to appear.  Interestingly, it’s Crush who rallies the team here by keeping it real and reminding everyone of how much in common they all have.  It’s great character progression and I’m glad to see that her team is growing on her just as much as they are all growing on me.

I continue to love the chemistry this team has together as all the characters have distinct voices and arcs that push the story forwards in compelling ways.  Roundhouse’s humor has really improved as he doesn’t come across as trying too hard now.  I really like how Red Arrow continues to be the person who watches Robin from behind the scenes to make sure he is doing what he’s supposed to be doing.  A character like Robin needs someone like Red Arrow to be a competent check on his authority.  Kid Flash clearly has some trust issues with Robin and I think Robin himself has to be questioning the veracity of Red Hood’s intel.

The art in this issue is great.  I think this might be Chang’s best work in an issue that I have reviewed.  Every panel when the team is trying to escape thrums with an urgency and tension befitting the situation.  There’s a wonderful texture to the art on these pages and Maiolo’s colors are the perfect compliment.  I love that Chang continues to eschew regularly shaped panels in favor of irregularly shaped ones for action sequences.  It really gives those pages an infusion of energy and the layout is refreshing for a reader.

This story could go so many different ways due to all the plots and subplots going on right now and I’m really excited to see where it goes next.

Final Thoughts: A fun, character-driven issue that tests the team’s cohesiveness by putting them in a situation where they have to prioritize trust over their own personal issues.