Review: Adventures of the Super Sons #5 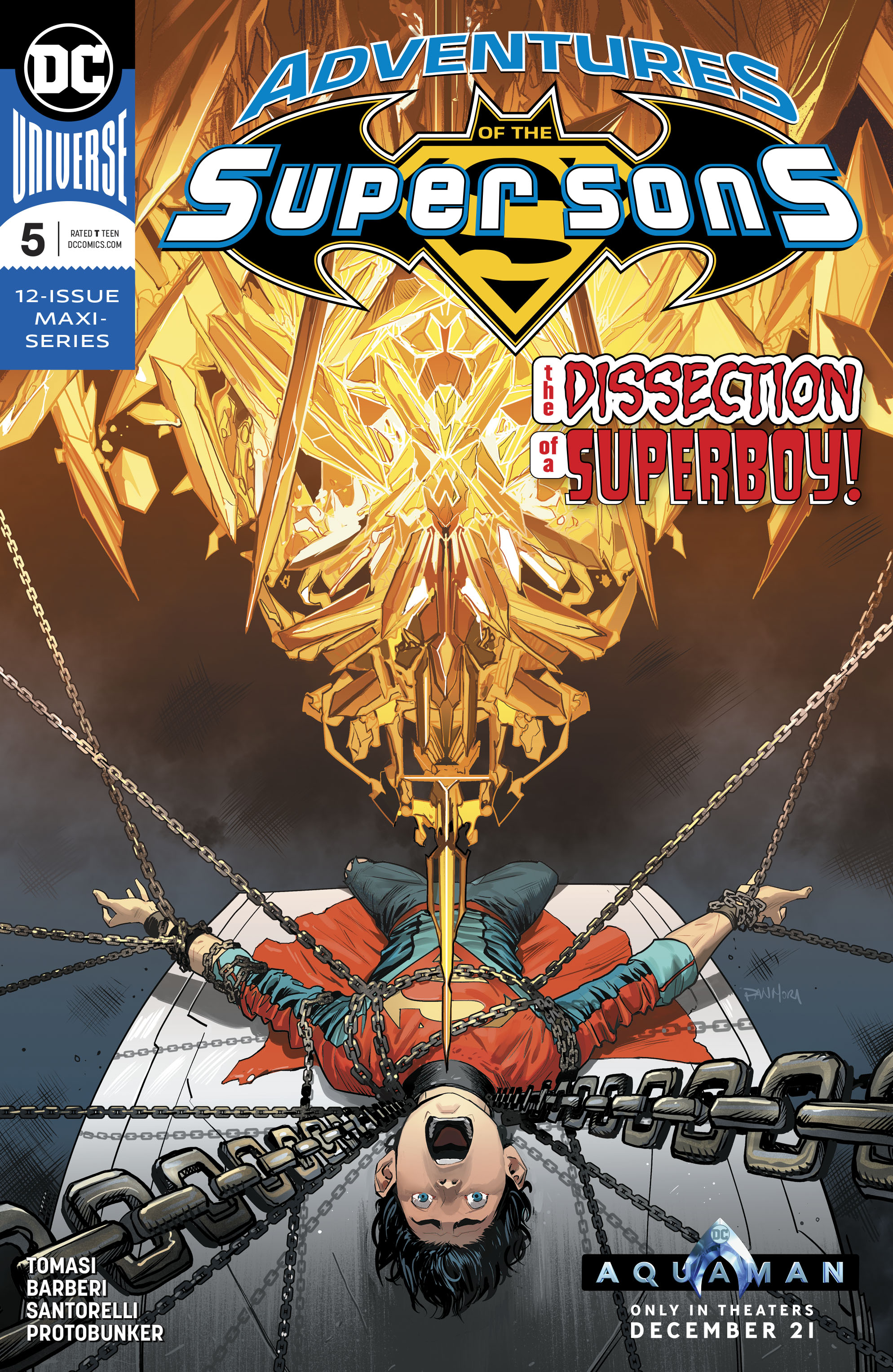 Overview: The boys come face to face with their future selves but, in a strange turn of events, realize they are constructs created by a being known as the Wonder Machine. Luckily the boys inspire their future selves to join the fight against their creator.

Synopsis (spoilers ahead): The issue opens with Joker Jr. racing through space trying to call for help from the space taxi service. They are not able to come to his rescue as Rex Luthor shows up and blasts the JJ’s ship to pieces and pulls him from wreckage stating how they will use him to get the location of the Super Sons.

Back in the creepy mansion, the boys are still reeling from their introduction to their adult selves. Despite getting along with their adult selves right away, the boys are somewhat disappointed by the state their adult versions are in (overweight, etc.). The group begins to venture off and explore their surroundings. They are met by two alien creatures who announce themselves as the Wonder Machine.

The boys learn that the adult versions are merely constructs and this is an elaborate ruse for the Wonder Machine to feed off the boys while it keeps them on their planet. The boys are shown what their lives could become and the adult versions realize they need to fight back against their quasi creators. The adult Jon and Damian become inspired by their younger counterparts willingness to win and fight back.

The tide turns but the mansion begins to break apart. The older heroes tell Jon and Damian to get out and that they will be only saving the future selves as well if they continue living on as they have. The mansion implodes and the boys take stock of what they learned. Ultimately, the whole event begins to slip from their memories but they promised to try and remember it so as to better their own futures.

Analysis: In a weird diversion from the main story, the Super Sons find themselves on a strange planet where they now find themselves teaming up with their future selves. It is a bizarre story but was a lot of fun to read. It has little to do with the overall arc dealing with Rex Luthor and his gang, but it showed the boys potential future and allowed them to come to grips with their own eventually growth and maturity.

Tomasi really throws us for a loop with these different, funhouse mirrors versions of Jon and Damian. To see a Superman who is overweight and an adult/middle aged Robin was certainly funny to see but also conveyed this very real future for the boys. Everyone assumes they will grow up and never change but youth eventually goes away and we get to see the Super Sons come to grips with this very real problem people face. Their future selves are less motivated and in need of inspiration.

Although the future versions are constructs only created by the Wonder Machine, they represent that deep-seated fear most people have of getting older and felt very tangible. The creative team really seemed to take this very twilight zone kind of side story and make it into something that the Super Sons will actually grow and mature from.

The artwork by Barberi continues to excel with these funhouse mirror versions of Jon and Damian. The M.C. Escher style of the mansion is very interesting and stays in tone with the overall wacky story.

Final Thoughts: Overall, I found myself really enjoying this issue and had fun while reading it. It does not have a real tie to the overall story but, as a relative “filler” story, it was funny while having some deeper themes if you were wanting to take something more away from the story.