Review: Adventures of the Super Sons #6 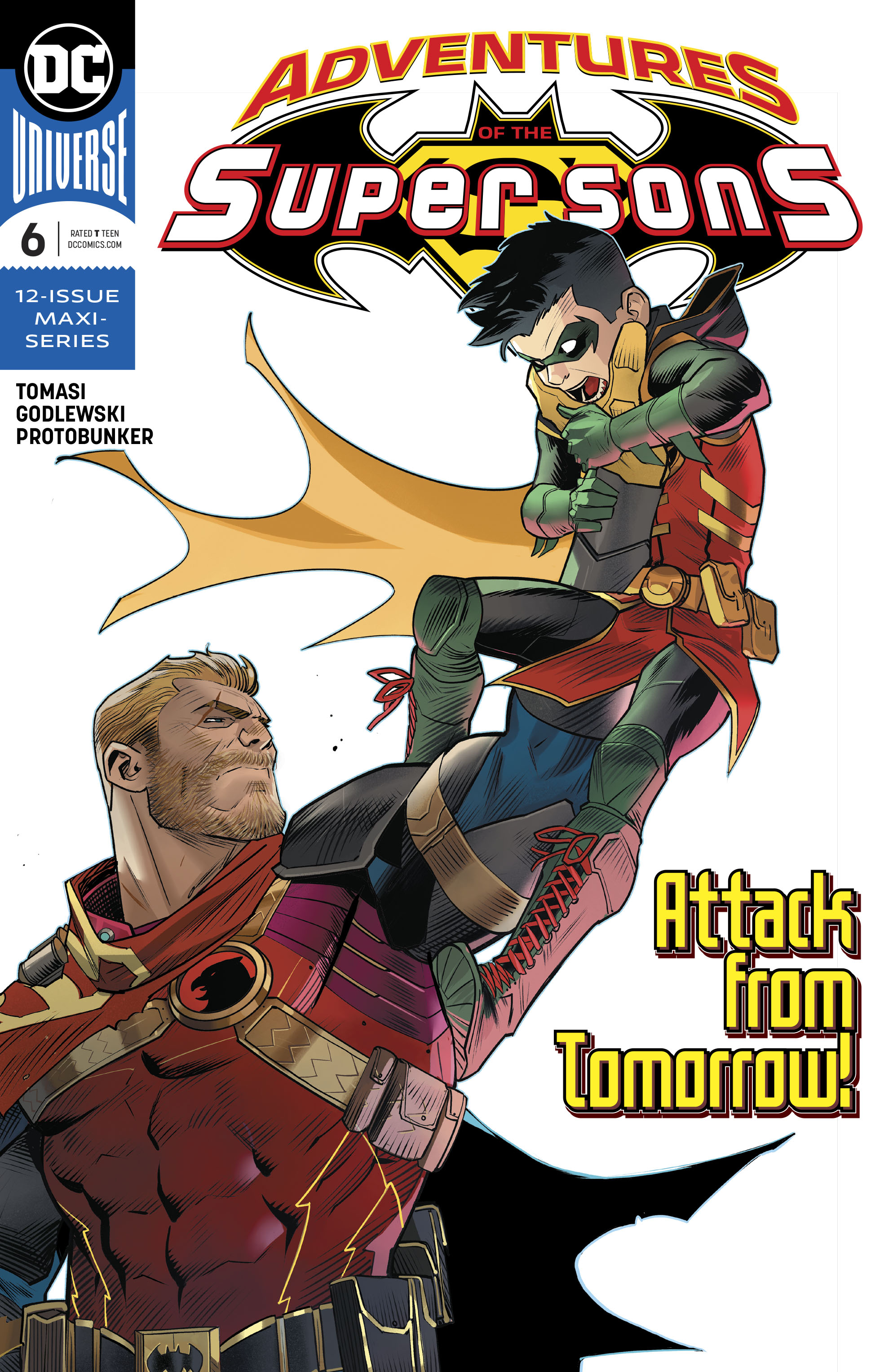 Overview: Damian and Jon try to get a better handle on their alien surroundings. After surviving a night, they are attacked by Rex Luthor. The pair is ultimately saved but captured by Tommy Tomorrow.

Synopsis (spoilers ahead): Opening at night, Robin is trying to stay vigilant on the alien planet despite Superboy’s annoyance. Superboy is enjoying some of the local fruit and tries to convince Damian to eat to keep his strength up. The pair eventually comes across a small creature that they follow and need to protect from a larger alien.

The next morning the duo find themselves face to face with Rex Luthor who had triangulated their position after capturing Joker Jr. Rex threatens to kill the small creature they had met from the night before unless the boys put on power dampening collars and surrender. Reluctantly the boys agree and following this, Rex monologues about how his future conquest of earth at the side of Lex Luthor and his eventual murder of his idol to assert his dominance.

Before Rex can divulge more of his plans, he is knocked unconscious by a bounty hunter named Tommy Tomorrow. Because the Super Sons were kind to the small alien creature, who is revealed to be an agent of Tommy, he treats them kindly as he takes them onto his ship. The reprieve is short-lived, however, as he informs them that he is taking them to the planet Takron Galtos which is one massive prison.

Analysis: Continuing with the wild space adventure of Robin and Superboy, the story seems to get even wackier with an introduction of mercenaries and a prison planet. This issue had its share of quieter moments between Damian and Jon but still left the overall arc feeling like it is meandering.

The issue itself had positive moments but, on the more negative side of the issue, it did not help to further the story in my mind. We do get the reintroduction of Rex Luthor after having not seen him at the forefront in a while. It was confusing that the rest of his gang was not there to assist but that can be chalked up to him wanting to handle things on his own. The issue concludes with the boys heading to a prison planet which could introduce some fun elements but, ultimately, still keeps the story away from the evil gang and the hypercube plot.

Regarding the positive points of the issue, it was nice to see the boys on a sort of camp out in the woods and encounter some alien, woodland creatures along the way. Tomasi’s dialogue continues to capture the juvenile and brotherly spirit of the duo’s relationship. The two bicker and jab at each other but, when things get serious or cute creatures are in harm’s way, the boys continue to be heroes and make the necessary sacrifice.

I am not as familiar with Lobo and the intergalactic bounty hunters so Tommy Tomorrow may be a nice wink to fans but I was unaware. He seems to be a fun character who has sarcasm and wit to help make his character an interesting read. He may not be around very long if the boys are about to be turned in to prison but his small cameo in this story but was fun to see especially in his attitude towards Rex Luthor. Additionally, the design for this “planeteer” was cool as he is sporting garments and gadgets from some of our well known Earth heroes like Batman’s utility belt and Superman’s cape. It’s not clear how he has come to own these but one might guess with his name including the word “tomorrow” a form of time travel.

Final Thoughts: Overall, I think this was a fun issue, but hopefully, the overall plot gets more focus put into it soon.