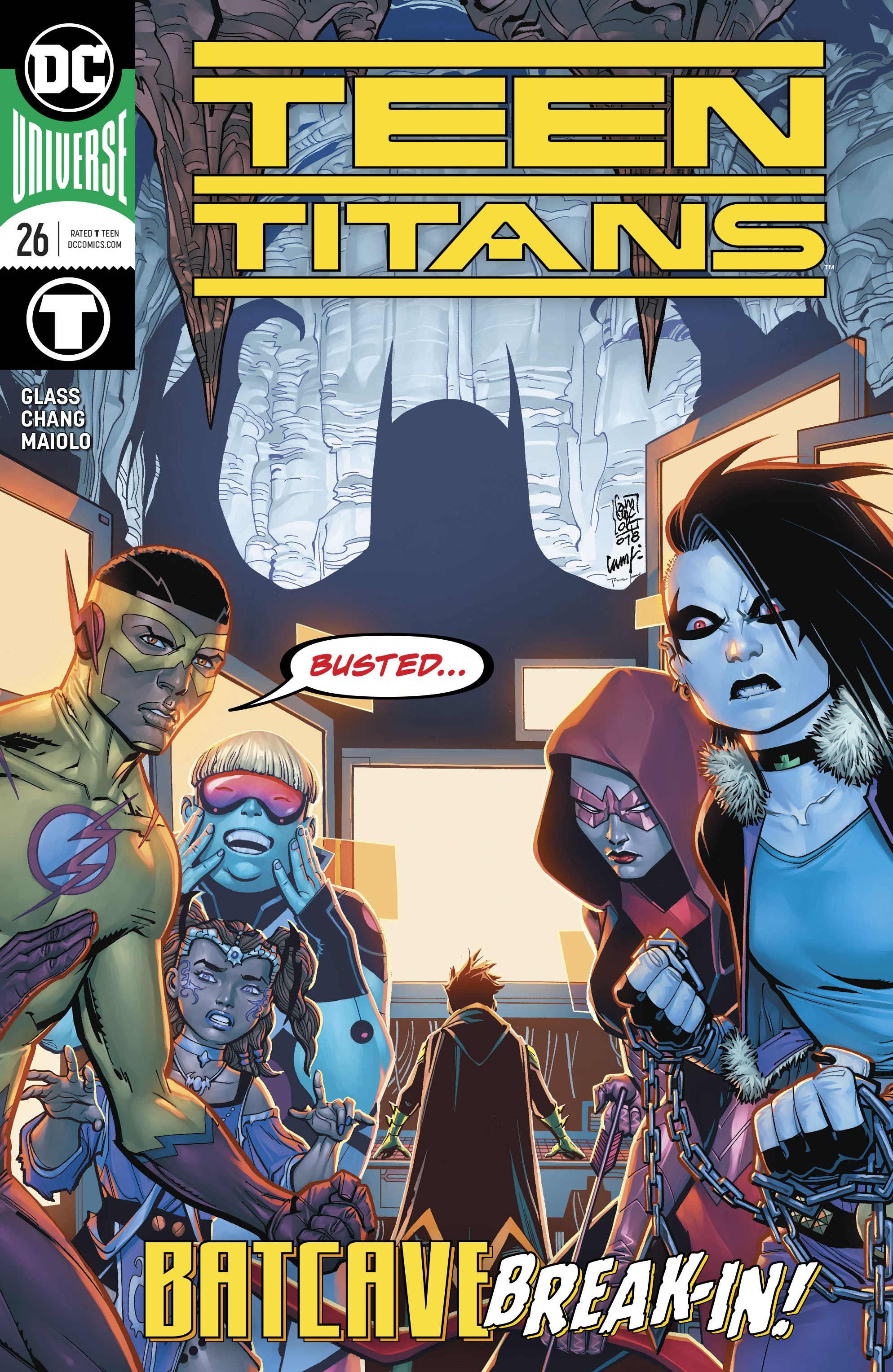 Overview: The Teen Titans break into the Batcave.  But all might not be as it seems as Robin continues to keep secrets.

Synopsis (spoilers ahead): Robin stops by his underground prison to feed his prisoners when a figure calls to him from the doorway.

The story flashes back to earlier when Robin takes the team on a mission to break into the Batcave.  The team is appropriately impressed with the location and Robin instructs Roundhouse to hack into the computer and not touch anything else.  While the team works on this, Robin and Djinn disappear.  While Crush tries to cover for Djinn’s disappearance, Roundhouse trips the alarms on the computer.

Meanwhile, Robin wanders the halls of Wayne Manor in search of his true objective.  He is met by Alfred who tries to dissuade Robin from carrying out his intended mission.  The alarm in the Batcave is answered by what appears to be Batman who attacks them.  Alfred and Damian continue to talk about family, Jason and the legacy of Robin.  Damian ignores Alfred’s advice and returns to the cave and, unbeknownst to him, Djinn is following along behind him in the shadows.

The team is struggling to fend off the attack when Robin intervenes by using a sword to cut off Batman’s head.  It’s revealed that it’s not the real Batman, but a robot designed to provide security.  Roundhouse states that the team now has full remote access to the Batcomputer and they leave.

Back in the present at Robin’s prison, the person calling to him is revealed to be Red Arrow.  She doesn’t appear to take exception to the prison but demands to know the real reason for breaking into the Batcave.  Robin reveals that it’s connected to Red Hood’s apparent betrayal, shows that he stole a small box and states that “Red Hood will no longer be a problem”.

Analysis: After being unavailable to review the last stellar issue in this series, I’m happy to be back to write the review for this week as this continues to be one of the stronger DC series being published right now.  Where the last issue was a little detour (a good one!) focused on Crush and Djinn, this issue focuses on the main plot involving The Other.  After Red Hood’s apparent betrayal, Damian’s paranoia and mounting frustration leads him to steal from the Batcave.  While we don’t know what it is he stole, we do get an excellent conversation between Alfred and Damian.  Alfred very much feels like Damian’s grandfather and Glass subtly encourages the reader to make this connection by having Damian think about how he never met his paternal grandparents right before he talks to Alfred.  Alfred gives him excellent advice on why heroes must take the moral high ground and implies that while Damian doesn’t have to be Bruce or Ra’s al Ghul, he’s starting to sound more like the latter.  The scene of Damian wandering through the manor and staring up at the giant portraits of Bruce and all the Robin’s before him was a great way to visually illustrate Damian’s complicated feelings about being a Robin and a Wayne.

The rest of the team doesn’t really do much in this issue other than serving as a distraction, but this mission is also more experience for them as a team in the field.  Their personalities also add moments of levity and different tones to an issue that would seem quite grim with only Damian featured.  I want to stress how some of these smaller moments work better now that we’ve learned more about these characters in the previous issue.  I’m more heavily invested in these characters because I know more about them.  Even Roundhouse’s humor takes on another layer because we know that it’s partly a coping mechanism for his insecurities and for what happened with his sister.  I know Red Arrow and Kid Flash are more established characters than the Crush, Roundhouse and Djinn, but I hope we also get an issue that explores some of their personality too.  In short, the team dynamics are really clicking right now.

The art team continues to do a really good job with this book.  I really appreciated the guest art in the previous issue, but I think Chang’s art really contributes to giving this series a lot of its character and attitude.  Maiolo’s colors really do a good job setting the mood; from the cold blues of the Batcave to the uninviting and forbidding reds and oranges of Damian’s prison.  Leigh also does a good job making sure the dialogue doesn’t dominate the art with his lettering.

Final Thoughts: Another strong installment in one of the better series DC is currently producing.