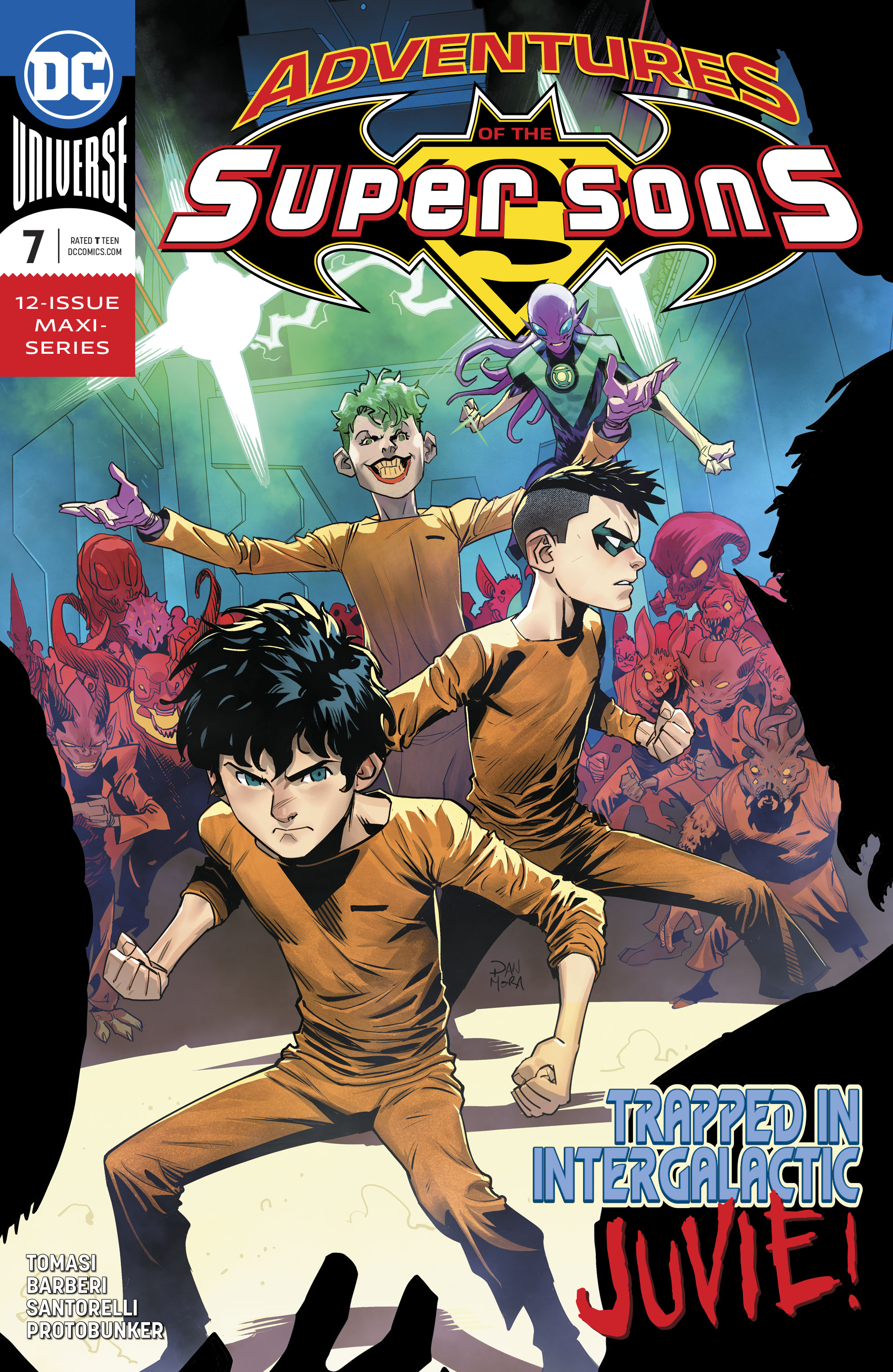 Overview: While stranded on an alien prison planet, Robin quickly adapts and becomes the unofficial Batman of Gotham through intimidation and fear. All his efforts are towards finding Superboy and escaping before Rex Luthor find them.

Synopsis (spoilers ahead): The issue picks up with the super sons on the planet Takron-Galtos. In a dark cell, Superboy appears to be drained of power. He is attempting to gain more power with the help of Joker Jr. Joker Jr. is quickly caught by Rex Luthor and one of his henchmen, Grundtette. Rex yells at Joker Jr. to tell him where to find the super sons.

In a brief flashback, we see the boys taken to the prison and left by Tommy Tomorrow. The group is quickly stunned and separated. Returning to the present, Robin has acclimated to his new surroundings but still has not found Superboy, who was placed in solitary while the rest were introduced to the general population. He has quickly learned local languages and allied himself with Joker Jr. in an attempt to find Jon’s solitary cell. Although distrustful of the clown, Damian follows leads provided by Joker Jr.

Arriving in a gambling den, Robin interrogates a number of criminals that have become under the employ of Rex Luthor. Before he bursts in, the criminals discuss how Rex Luthor told them to dress up like villains from Earth. They admit its silly but like the new outfits. Damian arrives looking for Joker Jr. but no one seems to know where he is. A small alien named Al-X tells him that the Joker Jr. was headed towards an inventor’s house last time they saw him. Al-X reveals himself to be a green lantern in training undercover to learn more without the power of the ring but after Robin leaves, the boy seems to be hiding something. This seems to be confirmed by the boy’s outfit of Sinestro and his all-to-happy look to be placed in charge by Robin.

Damian arrives at the inventor’s, named Gizmo, house to get more information. Gizmo is working on upgraded armor for Rex but admits to being controlled. He still gives Robin a tracker to find Superboy but alerts Rex soon after Damian leaves.

Following the tracker, Robin finds Joker Jr. being held by Rex & Grundette. The group begins to fight but Damian notices a “solar plug” on the prison wall informing him that Jon is near. His prediction is made true when Superboy comes bursting out of his prison cell asking if they can escape now.

Analysis: While this issue did not feature much of the super sons together, Tomasi gave us a nice look at Robin flying solo on an alien world. It was great getting to hear his dialogue as he investigates this planet and searches for Jon. The action was sparse in this issue but the artwork was still impactful.

Regarding the artwork, special attention to colorist Protobunker. The vibrant colors used in this issue help to elevate this cosmic adventure to make it that much more of a fun read.

In terms of writing, Tomasi continues to deliver on his expertise with Bat-Family characters like Damian. Hearing Damian’s inner dialogue, he truly sounds like Batman and seems to be coming into his own on this alien world as he dispenses justice. How he utilizes informants and fear tactics is both funny and intimidating as we see him becoming more like Bruce as he gets older.

Final Thoughts: Overall, the issue was a fun read and it looks like we will get to see the boys break out in the next one. It will be interesting to see where the boys head to next on their galactic journey.