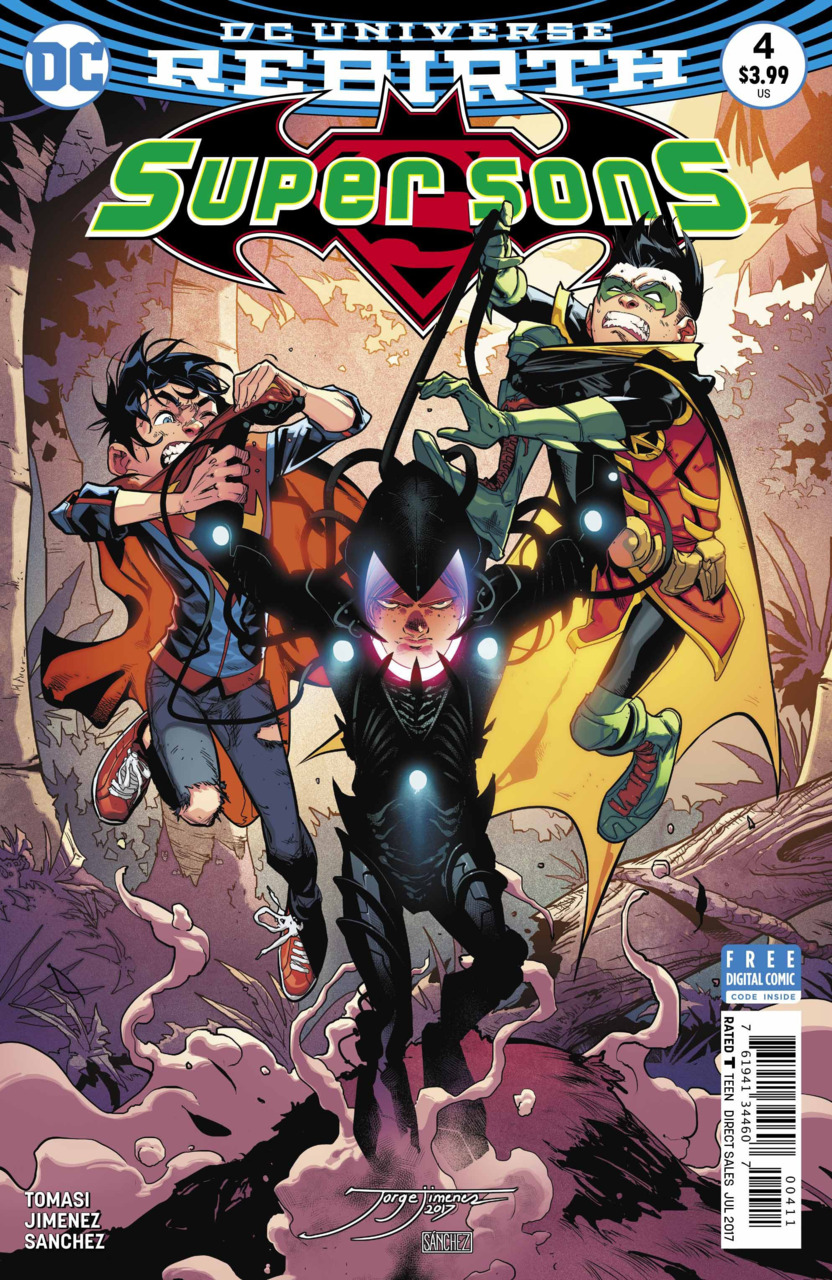 In Brief: Superboy and Robin have their final confrontation with Kid Amazo.

Summary (spoilers ahead): The issue starts with Lois and Alfred finding out that Jon and Damian have snuck out during the night. Elsewhere, the boys are chained upside down to a pole, captured by Kid Amazo. The boy goes on to give the traditional villainous monologue and brings out his family, the real one this time, to finally kill them. At this moment, Luthor barges into the room, demanding his armor back. Turns out that Damian used the android head from previous issue to send him a message telling him who stole the armor and where to find him.

While Luthor deals with the clone androids and Kid Amazo, Superboy and Damian carry the family out of the place. After making sure everyone is safe, Damian enlists Sara to help them stop her brother. They return and taunt Kid Amazo, making him reunite his android clones with his armor to enhance his own powers. As he does so, Sara gets a hold of the armor and controls it out of Reggie’s body.

Luthor controls the now hostless armor and, as he turns to take the boys into custody, they have already fled, Damian once again piggybacking Jon. They get to the Kent’s farm and, as they try to sneak back into Jon’s room, they find Alfred and Lois standing there, demanding an explanation.

In Depth: Remember when you were a kid, and, at some point, you would get so righteously annoyed at your parents that you would pack your bags and run away from home? You would carry a small backpack containing the life-saving provisions of your favorite toys because you thought that was all you needed to survive. Then, stomping your way through the house, you would go hiding in the backyard, or, at most, march all the way to your neighbor’s house and consider that a great feat. This is what Super Sons reads like, and it couldn’t be a tale better told of what would happen if the runaway kid were not you or me, but the sons of the World’s Finest.

In this final issue of the Kid Amazo arc, everything feels like a child’s play that got blown out of proportions. Kid Amazo, as almost all of the kids out there, has delusions of grandeur, but while regular kids think they can climb the highest tree in the park and come out unscathed, this kid thinks he can take down the entire Justice League on his own. In the end, all it takes to stop him is a little distraction provided by a mighty offended Lex Luthor and Sara, Kid Amazo’s little sister.

The creative team is obviously having as much fun as the kids themselves. Jimenez plays with poses, cameras, expressions. His art is always standing on the line between realistic and cartoonish. Every single issue of this first arc had a different highlight. For this one, I would like to point out how differently conceived the rooms of the boys are. We already had a glimpse of Jon’s room in issue #1, but now we see it in the light of day, in its full boyhood glory of posters plastered on light blue walls, clothes scattered around and a Superman statue sitting on a desk. Damian’s room, on the other hand, is pristine and impersonal, except for a painting on the wall and the ruffled blood-red covers on his bed. The disparity between those two is made palpable in every turn. Tomasi, on his end, has fun with the characters. He portrays a very selfish, full of himself Luthor. Damian, knowing that, does not send him a distress call, but rather a call telling him where to find his stolen armor; it so happens that he ends up assisting in Robin and Superboy’s escape in the process of getting Amazo’s armor back. This Luthor gets profoundly offended when Kid Amazo refuses to acknowledge him as Superman, and as he is expressing his distaste, Superboy uses him as a pivoting point and interrupts his speech. This whole first arc was built on the notion that those boys are almost diametrically opposite, but as the story moved forward so did their fighting evolved from arguing to bantering, so much so that Kid Amazo assumes they are family. Talking about family, I am not certain if every reader has realized what this child was doing to his family. Much like what happens in fairy tales, Kid Amazo’s villainy had its edges rounded to fit a children’s comic. Just as original tales of Sleeping Beauty is about rape and Red Riding Hood is about child abuse, Super Sons was about fratricide and psychological torture: the boy murdered a faithful copy of his own family in front of them every day. Every. Day. Also like the softened versions of fairy tales, the characters get a happy ending with hope for redemption for the villain. His actions were even more hideous than most of the Joker’s actions in canon, and yet Tomasi manages to make him fit the light tone needed for this title to work.

Overall: This is a comic book directed at a young audience, with children as the main characters, a kid villain and ending with a parental scolding, yet it constitutes one of the most mature titles in the DC line. A fun, well rounded final issue for what was the first story arc of Super Sons, leaving us wanting more of what is to come.