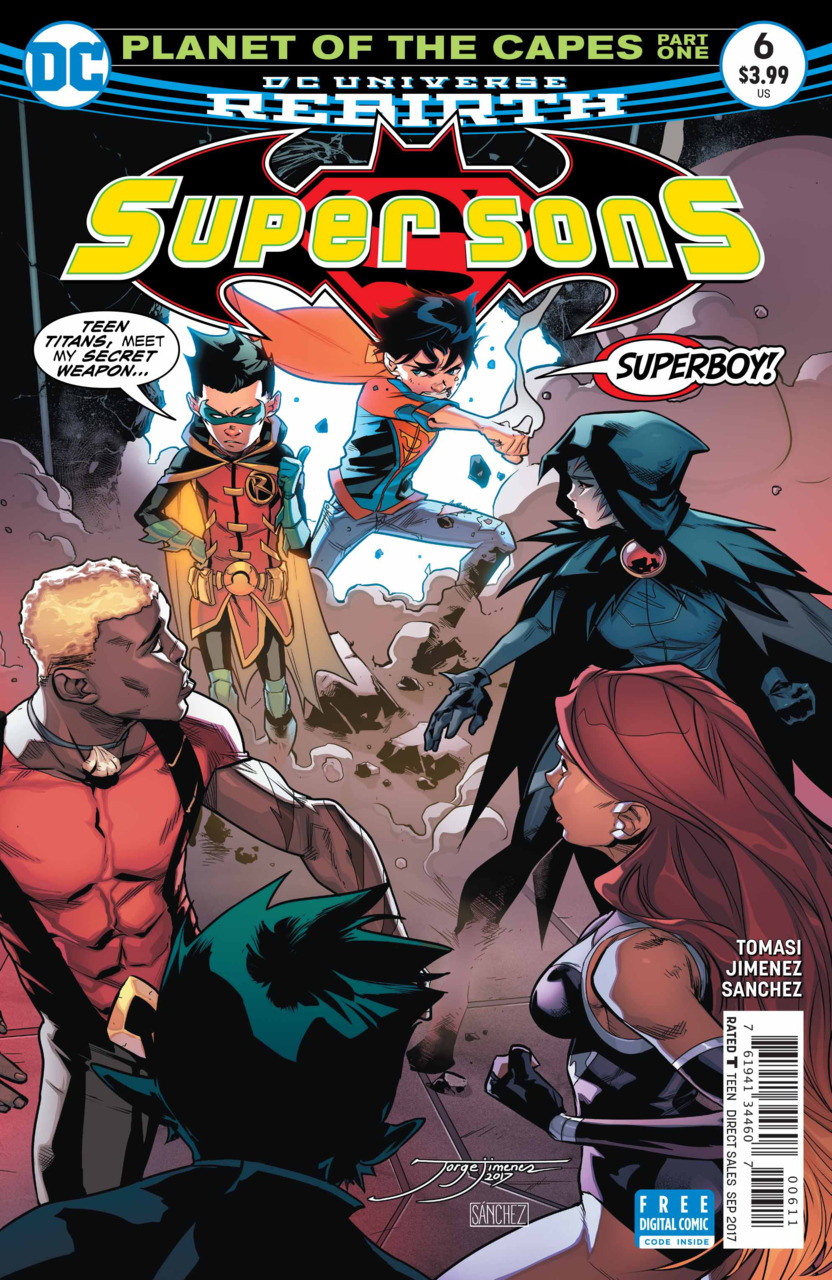 In Brief: Robin and Superboy meet for a night out fighting crime. Their get together is cut short by the arrival of the Teen Titans, who are working on a case in Metropolis.

Summary (spoilers ahead): Inside a decrepit building in the dark alleys of Metropolis, a man uses mud from a dead Multiverse to sculpt three living beings.

From this, we cut to the Kents’ new apartment in Metropolis. Jon is getting ready for his first night out with Damian, and Lois peppers him with motherly advice. He meets Damian on a rooftop and the duo sets out on their crime-fighting night, as Damian sees it, or helping-people-while-having-fun night, as Jon sees it.

They stop robberies, save cats stuck on trees, help old ladies change their tires. As their evening adventures come to a close, Robin calls the Titans. Turns out they are on an investigation in Metropolis. Robin dismisses Superboy, saying that they are on “Titans business”.

Jon returns home just on his curfew time as Damian as the Titans set out to investigate an energy disturbance. They stumble upon the villains molded from clay: Atom-Master, Chun Yull and Time Commander. The Titans are defeated, leading Damian to search for Jon’s help.

In Depth: This issue vibrates with old-school themes. From the use of word balloons on the cover, to the design of the new villains, Robin and Superboy saving cats from trees, to the absurd ending. And what an absolutely delightful last page. Super Sons is the only comic on my current pull list that has me cracking up throughout the read.

Light hearted would be a good word to describe the pacing and theme of the issue, despite the gloomy first page. Already on the second page we get Clark making fun of Bruce while Lois prepares a “super snack” for Jon to take with him. Jon is still depicted as the innocent child to whom this is all fun and games, while Damian sees it all as the mission. They both have a lot to learn from each other and Tomasi makes sure that we know it. Damian is slowly making himself more comfortable around Jon, while Jon is slowly understanding that this is more than just stepping into your father’s shoes and pretending you are a grown up. This is made clear when Jon refers to Damian when talking to Lois, telling her that their costumes are more than that, they are uniforms. This self-referencing is something Tomasi often does to strengthen the plot. I’ve known him to make a cross reference between different titles, months after the referenced issue came out – when I say this I am thinking about the movie night scenes in Nightwing #151 and Batman & Robin #20, two issues with a three-year time span between them. This is his style, he likes to leave bread crumbs. In this case, he picks the crumb back up quite quickly.

As for the art, what can I say? I wish Tomasi and Jimenez were also behind Teen Titans. And Titans. And maybe DC as a whole. Not that the other creative teams are terrible, it is just that those two are too good. As the Titans first appear, almost as if they were walking down a catwalk, I can’t help but remember the way I used to see older kids as if they were so much cooler and so much better than me when I was a child. This is probably us getting a glimpse of Jon’s point of view as he looks at those older heroes with deep admiration. I honestly cannot wait until we get to see how Jon is going to work with the Titans. If I had to guess, I would say we will win them over in a heartbeat, making Damian feel a little jealous, effectively reversing their current roles.

Overall: Tomasi builds an issue heavily influenced by old school super hero stories, which works perfectly for two heroes-on-build such as Robin and Superboy. Jimenez returns with full force to the title, giving us the best Teen Titans depiction at this moment in DC Comics.