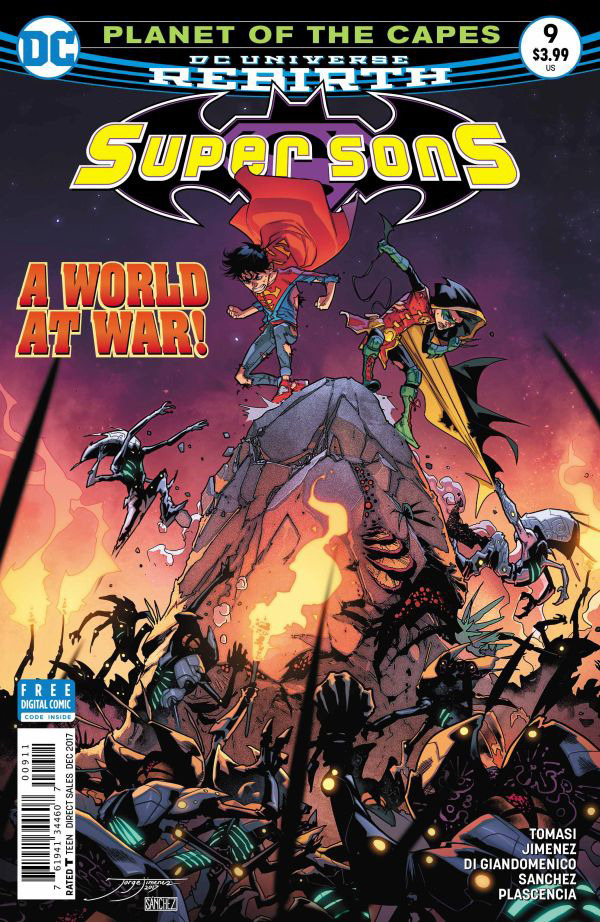 Synopsis (spoilers ahead): Ygarddis has come with his clay army, and Robin and Superboy have to face the superpowered troops. Hard Line and Big Shot are caught in the tentacles of the living planet. Overwhelmed, Superboy decides that the best course of action is to surrender.

The four of them are dropped in a cave where they find Kraklow, the mage. Big Shot and Hard Line race for him thinking this is the one from their dimension, but Superboy stops them in their tracks.

Kraklow reveals that the girls are also made of clay, created by his counterpart to fight Superboy and Robin. They question his answer, and he goes into a long explanation about how he met his counterpart, and how he got the clay. The Kraklow from the world of the girls confessed himself to have created some people he remembered from his destroyed world, going as far as mimicking their powers and memories. As the portal through which they were having their conversation closed, Kraklow says he saw his counterpart being murdered by Ygarddis.

Upon this revelation, the girls question themselves, Robin says that it will all be easier if real lives are not at stake, but Superboy takes the reins of the situation and tells the girls that he sees heroes in them. After they share this piece of conversation, Ygarddis returns to the cave to demand that Kraklow opens a new portal so that he would feed on more worlds. In the confusion that ensues, Superboy gets engulfed by clay people.

Kraklow then opens a portal. Everything is getting sucked into it, and Robin shouts for everyone to hang on. As Ygarddis passes through the portal, Kraklow traps him in it, fooling the living planet. Hard Line and Big Shot are dissolving as a result of the decompression generated by the portal, but Kraklow restores them to how they were. The portal remains open, and after thanking Superboy and Robin, the girls and Kraklow send them back to their world. They stay behind to defend their world.

Back in their regular dimension and hours later, Jon and Damian have told Superman about the whole event. He says that time did not seem to pass at the same speed, since their absence was not long enough to be noticed. As Superman flies away to stop a derailed train in Philadelphia, the boys are left with their pancakes, waiting for Alfred to go get Damian.

The last page of the issue takes us back to the world of Big Shot and Hard Line. They have opened a school for the new, young heroes Kraklow is creating to help them fight against Ygarddis if he returns.

Analysis: Kraklow’s redemption arc is closed with this which is the last installment of “Planet of the Capes.” This comes after an issue which was mostly exposition, so it was expected that not much of it would be needed for the last part, but that was not the case. Right after the short, but incredibly composed fight against the clay capes at the beginning, we are once again taken into an exposition spiral as Kraklow tells his tale. This also coincides with the change in artists.

For some unknown reason – probably due to some sort of deadline mess inside DC -, the middle half of this issue had art by Carmine Di Giandomenico and colors by Ivan Plascencia. I have read some other comics with art by them, and this looked rushed and beneath their capacity. Again, I believe some mistake in planning happened, which probably involves all of the creative and editorial team.

This abrupt change both in pacing and in art plunged what promised to be a good issue into boringness. The storytelling by Giandomenico is confusing and disconnected in this issue, and the whole story by Kraklow takes too many pages. This scene from Giandomenico’s second page took me completely out of the story. First, the location chosen is absolutely generic, and the gray of the rocks is used as a solid color background for many of the panels to come. Then, the girls look like they are about to attack Kraklow and that Superboy holds them back, despite the fact that they are friends with their Kraklow, Superboy being the one who just fought this guy.

Big Shot and Hard Line also lost much of their charm at the hands of Giandomenico and Plascencia. They are drawn with the same face, and small details such as Hard Line having no pupil and having dark marks around her eyes are lost, along with Big Shot’s afro, which here looks like a bunch of fluffy, straight hair. Another moment that speaks about how this issue was rushed is the fact that, apparently, no one bothered to explain to Giandomenico that the clay people should look like individual heroes, not just some uniform mass of clay. Then again, if this was the initial intention, I don’t see why Jorge Jimenez would have cared about designing each of the clay men to look different from each other consistently all through the arc.

This takes place in the final fight sequence, and we are now in a red environment that, again, is just generically hellish. The one rewarding bit about this sequence was Kraklows’s double play and finally his redemption. At this point, Jorge Jimenez and Alejandro Sanchez are back. The same page that reveals Kraklow’s real, final intentions is also a display of incredible lettering. Rob Leigh, who had been absent for the previous issue, uses the double O of the onomatopoeia to frame the characters, taking our eyes to the most important piece of the scene. Coupled with his choice of using orange, therefore going for contrast with the blue background, while also making it transparent so it would not hide the art, shows how well thought this piece of lettering is.

The final scenes of the issue take us back to a slower point in the pacing, but this time in a natural progression. For the boys, this is the calm after the storm, while for the girls this is the calm before the storm. Jimenez once again shows his prowess in designing characters, with all of his hero kids looking incredibly interesting.

Final Thoughts: An uncharacteristically clumsy issue for Super Sons, with some editorial problems that show through the final product. The abrupt change in artists is upsetting and takes the reader out of the story. Tomasi’s pacing here faltered, with too much exposition for a final issue. The final page is rewarding enough for this issue not to be such a big disappointment. Otherwise, easily the weakest issue of the series yet.