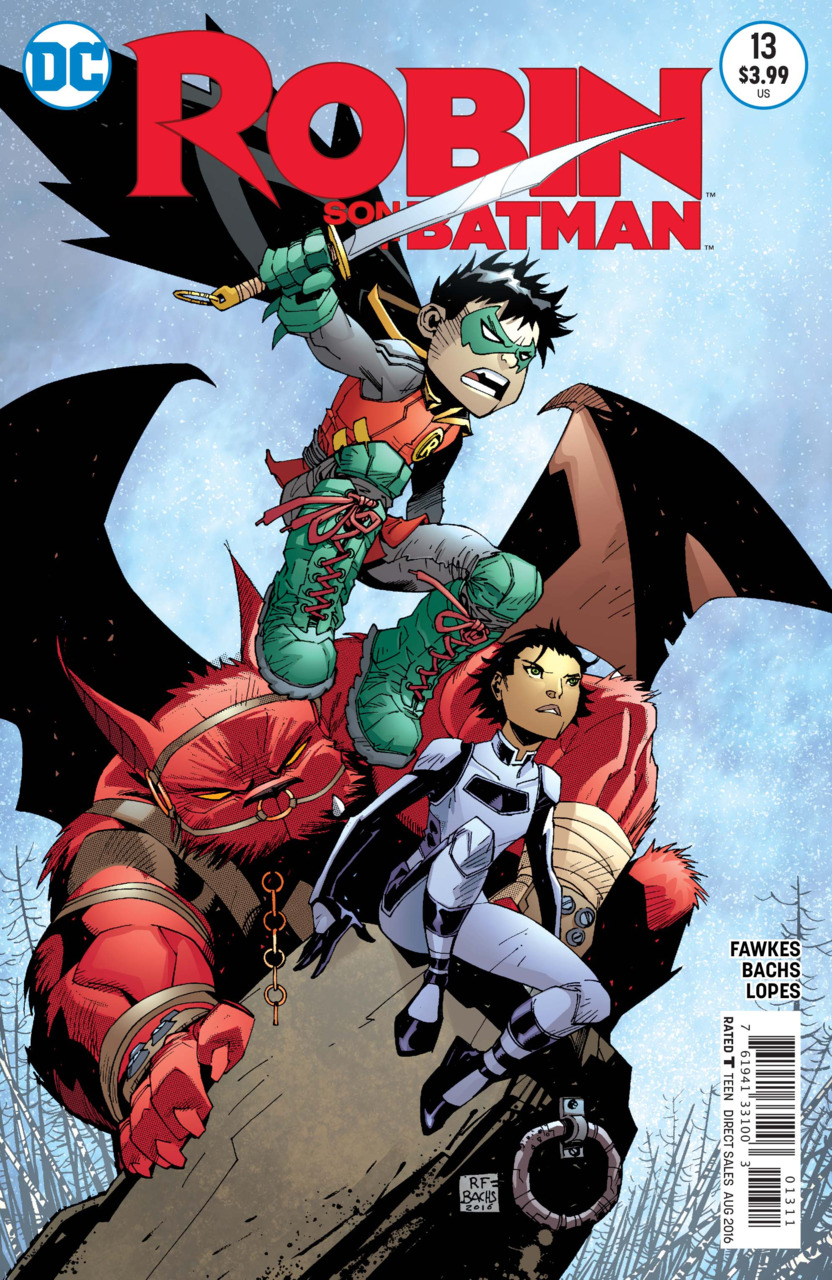 As the series’ final issue opens, we see the dead spirits of several people being warped and manipulated by an unseen foe. Cutting over to our main characters, Maya, Damian and Goliath are resting briefly alongside Suren Darga and having something to eat. As Maya comments about family picnics between the Al Ghul and Darga clans, Damian explains that Batman had argued with Talia to allow Damian to escort Suren back to Gotham. The trio is suddenly attack by Darga ninjas who are still in a fanatical rage against Damian. Suddenly, the ninjas fall to the ground as if drained of energy…Suren joining soon afterwards. Using her sensors, Maya discovers that the energy is being siphoned off and flying towards an unknown destination.

Grabbing Suren in his claws, Goliath flies off with Robin and Nobody atop him…all the way to Russia and the site of the Tunguska Crater. Landing at the center of the energy distortion, Suren awakens long enough to use his magic to allow Damian and Maya to pass through a barrier. Descending into a secret temple, our heroes discovering that the energy is flowing into a revived Den Darga! Launching into battle, Robin and Maya attempt to stop Darga but are shot backwards. Grabbing his son and using him as a hostage, Darga is suddenly distracted when Suren grabs him and pumps him full of magic. Leaping at the villain, Goliath nearly puts Darga through a wall as Nobody and Robin leap back into the battle.

Realizing that a magical, red crystal is acting as a conduit for the energy being siphoned from the Darga ninjas, Damian attaches several grappling lines to the crystal and tells Suren to redirect the energy from his father. Ordering Goliath to grab Maya and take her away, Maya screams for Damian as a giant explosion catches both Damian and Den Darga as both fall to the ground.

Running to his side, Maya has tears in her eyes as she finds Damian dead. Looking up at the red spirits surrounding them, Suren points out Damian’s spirit as it is being pulled into the afterlife by Darga’s spirit. As Suren calls out to the “Son of Al Ghul,” Maya informs him not to call him that. Shouting for “Robin! Son of Batman!” Damian’s spirit comes back to his body and he is revived. Awakening from his near death, Damian tells everyone “well done” and turns his back with tears in his eyes. As the issue (and the series) comes to a close, Damian tells them that adventure awaits and we see Robin, Maya and Suren flying off atop Goliath.

It was interesting to start off having Damian seeking to make amends for the Year of Blood…but as soon as Ray Fawkes took over, it seemed that the series took a nosedive as Fawkes attempted to finish off a storyline that wasn’t his own. I would have preferred Fawkes to come up with his own story…then it may have seemed a bit more connected to the writing. It also seemed that there could have been some nice moments that Fawkes decided to pass on, most importantly a meeting between Bruce and Damian following the former’s resurrection.

This issue seemed unneeded in my opinion…as of last issue, Suren Darga had been defeated and the Year of Blood items had all be returned and atoned for. Now we have our heroes going up against Den Darga (who I thought was dead) and essentially taking him down with some weird magic that made no sense.

Overall I’m glad this series was over…started strong but ended rather weak. I am looking forward to Damian being in two series’ in the coming Rebirth months. Taking over the Teen Titans and teaming with the son of Superman seems like a good match for the young Boy Wonder.