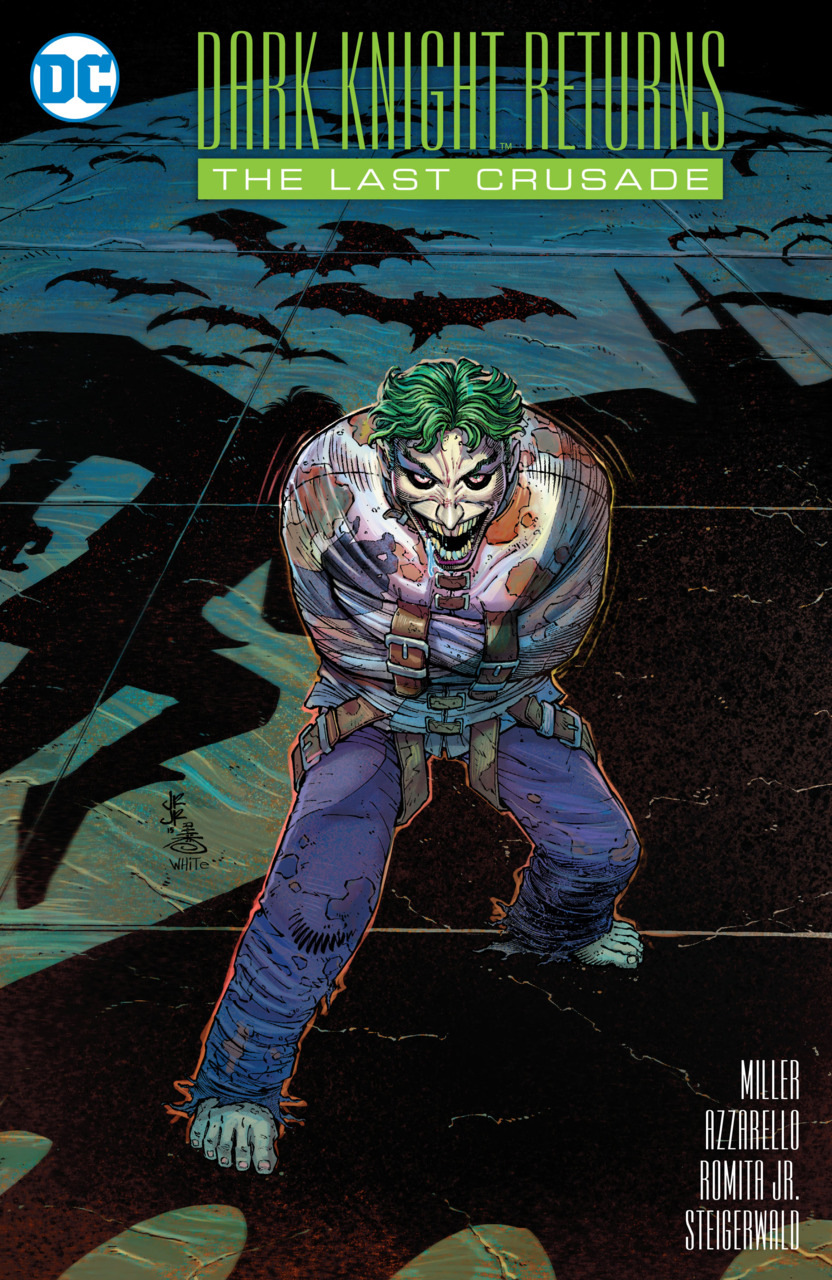 While the Dark Knight III – The Master Race is on a brief hiatus, we are given a one shot placed before the events of The Dark Knight Returns, focused on an aging Batman and his impetuous sidekick, the Jason Todd iteration of Robin.  The book opens up with the Joker being institutionalized in Arkham, again, after being caught by Batman, again, after escaping from Arkham, again.  A fact the Joker relishes.  Cue the Miller Dark Knight staple talking heads discussing both the apprehension of the Joker and whether or not the inclusion of Robin in Batman’s activities could be considered Child Endangerment as they consider him to be a boy.

The next morning Robin is itching to get going on training, but an aging Batman delays him.  The years have caught up with him and he isn’t bouncing back as quickly after a night of fighting.  After medicating, he shows us he still has quite a bit to offer, sparring with Robin.  Despite being older and slower, he overcomes Robin’s assault with patience and strategy.  The session is cut short by Alfred, with news of a personal nature.  A wealthy contemporary of Bruce Wayne has been found dead.   Talking to the widow, he finds that his once level headed friend has gotten involved in something, running through the family’s wealth.

With the Joker locked away in Arkham (for now) his gang has moved on to other mischief making.  Batman and Robin bust in on them robbing a pharmacy.  Again, Batman’s aging and reflexes are highlighted throughout the initial fight and ensuing car chase.  The situation is resolved quickly when the gang’s van is run off the road.  Batman does the hero thing and starts getting the gang out of the van before it explodes, only to allow another member to get the drop on him.  Robin saves the day in a rather brutal manner, pretending not to enjoy it.  But Batman knows the truth.  Back in Arkham, the Joker gives a soliloquy on the nature of natural perspective and forced perspective while the inmates progressively get more agitated.

The next day Bruce Wayne is with a now retired Selina Kyle.  They discuss Bruce’s aging and get to the root of why he’s not yet retired.  Jason Todd isn’t ready to be on his own.  He also admits he isn’t quite ready for the civilian life as of yet.  There is another interlude of a commercial for Mothers Against Batman, criticizing him for taking the law into his own hands and dispensing violent judgement as he sees fit.  That night another of Gotham’s wealthy residents is behaving bizarrely, this time a man has taken his wife hostage to prove how much he loves “her.”  Batman and Robin dissolve the situation, but Robin again takes things a step beyond Batman’s comfort zone, choosing to disarm the man not by knocking away the gun, but by attacking his arm.

Soon after, Batman and Alfred have “The Talk” about Jason.  He is cold and lacks empathy.  Bruce has been choosing very skilled protégés, but none have matched his brilliance.  Taking in the clues from the behavior of the men, he has determined Poison Ivy to be a possible culprit.  Old fashioned detective work ties the two victims to a company called Greenvain.  In Arkham, the Joker’s plan is taking shape as his control over the inmates has begun to take hold.  Batman and Robin’s search for Greenvain takes them to, naturally, a sewage plant.  Here Batman takes the lead and has Robin ride the bench.  He encounters Killer Croc within the plant, who seems to be running communications for “her.”  While he is brokering a deal with the latest wealthy victim Batman unwittingly makes his presence known.  Furthering hammering home the idea that Batman has lost a step, Croc gets the drop on him in the ensuing skirmish, receiving one hell of a beating.  As Croc continues to reign down pain, the police show up, called to the scene by Robin.

Batman, in more physical and emotional pain, discusses with Selina Kyle whether or not he is addicted to being Batman.  There is another interlude showing a TMZ style Gotham gossip show reporting on the injuries sustained to the third victim who escaped the scene of the fight the previous night.  Batman and Robin tail him to the Gotham Botanic Garden, where we find his obsession, and that of the previous victims, is Poison Ivy.  Simultaneously across town, the Joker instigates his plan, a well-timed full scale riot which covers him nonchalantly strolling out the front door into the night.  Back in the garden, we find out that Poison Ivy has a menagerie of wealthy men under her influence, and she’s been using them for money and gifts.  A fight ensues wherein Ivy orders the men under her control to fight on her behalf.  Whereas Batman acknowledges the innocence of the men and takes them down as gently as possible, Robin goes full force against them.  In that moment Batman realizes he has trained Robin to be an attack dog.  He calls out to him to back off the violence, but that allows Killer Croc to get the drop on him yet again.  The beatings come again while Robin finishes off the victims of Ivy’s control.  Eventually Batman gains the upper hand and beats down Croc while Robin captures Ivy.

The news reports the Joker’s escape from Arkham, and Batman admits he is in no shape to handle the Joker due to the abuse he suffered from Killer Croc.  Robin insists on going back out to deal with the Joker situation, but is shut down.  They both need rest before they can deal with anything else.  Robin lurks momentarily in the shadows while Batman and Alfred continue their talk on legacy and that Jason Todd isn’t ready to take up the mantle and may never be.  He’s wild and headstrong and enjoys the fighting too much.  The pair resolve that Jason is not beyond saving, and that Batman has to teach him to be better than himself.  Unfortunately Robin has ignored Batman’s advice and gone after the Joker.  Goons get the jump on him and the rest of the story is a familiar one if you read Death in the Family.  We close on the Joker smiling.

This was a really thick book to recap.  True to the nature of Miller’s original work with Batman Year One and The Dark Knight Returns, this is a character piece on what Batman’s mission means to him and how it has affected him over the years.  In Year One he was a young man looking for justice.  In the Dark Knight Returns he was an old man looking for redemption.  This book filled in some of the holes regarding why he went underground in the first place.  Miller must have had more than a guiding hand in setting up this book as the layouts and pacing are pitch perfect with his previous work.  Brian Azzarello and John Romita Jr. are there to help him put the story together in perfect fashion.  I’ve never been a big fan of Romita Jr.’s work, but I must say this is probably some of the best art he’s put out in recent years.  His pencils are less harsh, allowing Peter Steigerwald’s almost painting-like inks and colors to be showcased.

I’m a sucker for a Batman and Robin story.  The entire concept of legacy is what draws me into the DC Universe.  Most of the time the protégé is the heir apparent of the main hero, but in rare occasions they aren’t a good fit.  This book studies that relationship, that of the mentor who knows their protégé is headed down a dark path.  One of my favorite dichotomies in a Batman story is the balance between the hero and the darkness.  There is a line that Batman doesn’t cross, even if he toes it from time to time, that is what makes the character the hero he is.  The viciousness and the restraint.  Alfred is a great character as he knows Batman better than anyone.   He is the perfect sounding board for dealing with Jason Todd’s issues as he saw many of those traits in Bruce. His guidance is one of those things that keeps Batman from crossing that line.  Miller and Azzarello play with these themes and carve out one of the better self-contained stories I’ve read in some time, one which has earned its place with Miller’s previous work.