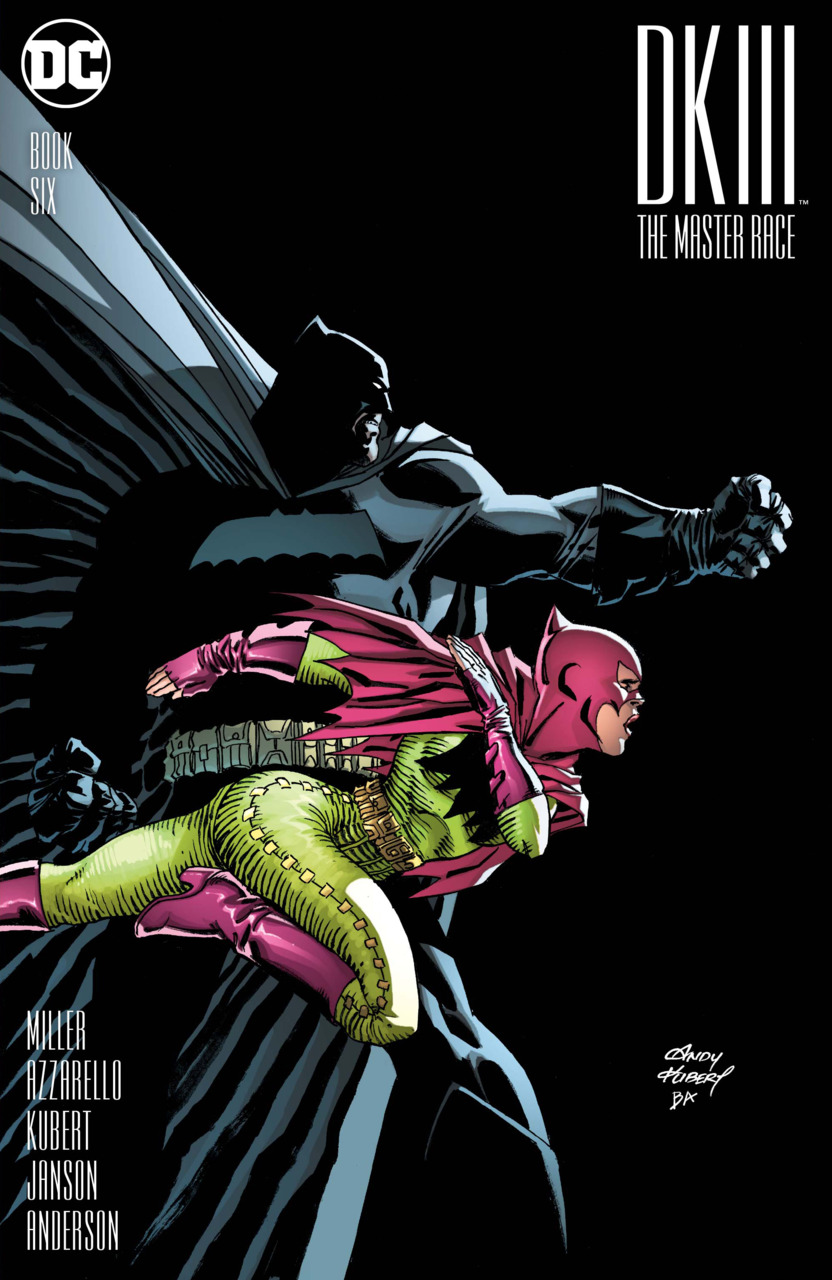 What is there to be said about Dark Knight III: The Master Race #6?  There’s action.  There’s suspense.  There’s another cliffhanger.  All three things are important when making a great comic, yet somehow this series isn’t landing with me.  Maybe it’s the delays.  Maybe it’s something else.  This is a series I want to love, a series that I have enjoyed.  It’s more than redeemed itself from the mess that was Dark Knight Strikes Again, but there’s still something missing.

Batman and Superman find themselves back in a familiar situation, fighting back-to-back against a common threat, the Kandorian cult.  The fight ensues.  The kryptonite storm has dramatically lowered the power levels of the attackers, but they are still formidable.   The battle is brutal, at least in theory.  It’s not presented in a large enough scale, or with the drama I was expecting.  The build-up so far in this series has been fairly well done, so this is a rather disappointing outcome.  I just wanted more from this scene.  So much more.  It read far too quickly, and while a few of the beats were enjoyable, the majority were fairly unimpressive.

This brings us to the close of the issue.  The escaping villain, Quar, casts a parting shot in the form of his heat vision, striking Batman’s chest.  We get the lifeline from Superman’s point of view, very reminiscent of the ending to the original Dark Knight series, only this time it’s going the other way.  I hope this is a story beat that is merely for tension purposes.  I can’t imagine Batman going out like this.  If Batman dies, he dies as a hero.  Everyone knows that.  So, I’m sure Batman isn’t really dying, but if this is it for the Dark Knight, it’s a complete waste of story.

I’m still struggling to put into words the disappointment I’m feeling.  It has been months since the last installment was released, and this is what they came up with?  That isn’t to say that the series is intrinsically bad, but it suffers from a number of handicaps, the delays being one of the largest.  Before sitting down with this book I had to re-read the series.  Maybe it’s a sign that I’m getting older.  Maybe it’s a sign that the series has been entirely forgettable.  We’re six issues in now and besides the Kandorians, I’m not really sure what the point of this story is.  It seems overwhelmingly mediocre in nature.

Kubert’s art continues to be the big winner so far.  He does a great mix of his own style while making the book fit in quite well alongside its predecessors.    I wish the colors were a bit more under control, though.  I want more muted tones and grays.  I might be in the minority on that one.  There’s something about the Dark Knight books that makes me want them to be darker in visual tone.

There’s plenty of story left to tell.  I’m hoping this book brings it back together and finishes strong.  The team behind it is great, so I have faith in them.  There’s always some missteps along the way, so let’s put this ordeal in the past and focus on what’s to come next.

Oh, and there’s another Miller backup.  World’s Finest #1.  That’s a thing that happened.