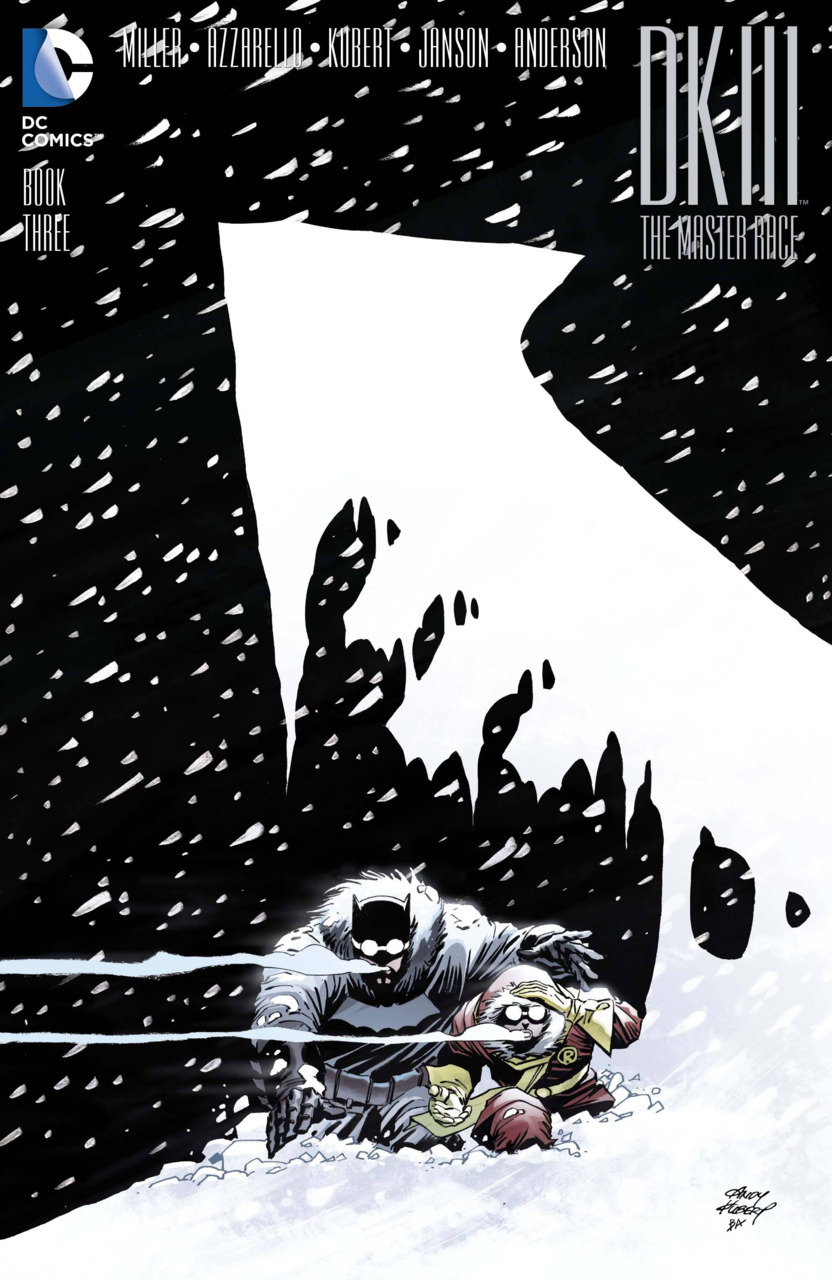 Synopsis: Bruce opens the issue with an inner monologue about his vulnerability that has come with both age and too many battles. He acknowledges that the fire that has always fueled him is still very much there but that he would only endanger Carrie if they went out on patrol. Nothing could reinforce this point more than his use of a cane and his very battle-worn body. Once out of the room after Carrie falls asleep, Bruce monitors the recent events of Quar and his followers. Carrie joins him at the monitor just in time to see Quar address the world and declare him and the other Kryptonians gods and worthy of the people’s worship. As a sign of their power and “sacrifice” to the people of Earth, Quar gives his son a seed which turns him into a nuclear bomb as he plummets towards Moscow and destroys it. Bruce tells Carrie that they will not be able to stop this new threat alone.

As news coverage catches people’s mixed reactions to the Kryptonian suicide bomber, Bruce and Carrie cross the frozen tundra to the Fortress of Solitude. Standing in front of a frozen Superman, Bruce tells Carrie that Clark gave up a few years ago. He proceeds to take a sledgehammer to Superman’s frozen head to break off the ice. Once some of the ice is removed, Bruce orders Clark to get up and that, as much as it hurts him to say, the world needs Superman. Superman remains silent until Carrie tells Bruce they are wasting their time and refers to Quar the other Kryptonians as Clarks’s people. Emerging from the ice, Superman only questions Carrie’s comment but seems very much awake now.

Near a downtown area, Quar’s followers try to get the people’s attention but the people are too consumed with their phones and other devices to even notice the aliens issuing threats above them. After a satellite being destroyed and their devices losing signals, however, the people are very much aware of their new “gods”.

Also above the city, Lara is observing the destruction and panic within the city when she is approached by Quar. He tells her that she can be so much more and that she is above the rules of this Earth.

A few days later, Bruce and Carrie assemble the Sons of Batman and discuss what the “phony bosses” will do in the face of Quar’s threats. Even Batman is surprised when its announced that the leaders of many nations will be discussing global surrender. At the U.N., Quar faces the leaders of the world and demands their answer. He is interrupted by Batman appearing on all the monitors telling Quar to “go to Hell”.

Superman arrives to put Batman’s order into action if necessary but is surprised when his own daughter, Lara, enters the building calling him a traitor and preparing to battle him.

Thoughts: Despite a lackluster start to this highly anticipated title, I thought that this issue did a great job at continually building the stage for a potentially good story. Miller’s influence was certainly felt with the social commentary on both the talk show panels as well as the not-so-subtle slam on a younger generation obsessed with social networking and new technology.

The appearance of Batman, presumably Bruce this time, was certainly a cool moment but I actually felt like Bruce’s arc in this story is now coupled with Clark’s. Not that this is a bad thing by any means. We see both heroes plagued by old wounds, both physical and mental, yet still driven to sacrifice for the people of the world. Even though Bruce had this similar change in DKR, it seems that Clark’s life is now also at that same stage. I think that this can only help to elevate the story in future issues.

While I appreciated what the creative team delivered in this issue, it was not without its problems. The villain of Quar seems to be a pretty standard, world dominating antagonist but does not really add much to the overall theme that the Dark Knight Returns story had. He could be just the set up for Lara becoming the big villain in this story but we won’t know that until the next scene plays out next month. Another issue I had was with the public’s disregard for what was happening. I get that people are engrossed with their phones and the internet but I am pretty sure the destruction of a city by a Kryptonian suicide bomber would probably make people a little more cautious while outside their homes (if they went outside at all after all that).

The artwork was an aspect of this issue that helped increased my rating. One highlight of this issue was Kubert’s page of a devastated Clark at the blast site. It was a haunting image that stood out. You could really feel the sadness and rage coursing through him over what another Kryptonian had done. Kubert is doing a great job at capturing Superman’s image in a way that I never thought Miller did.

Hopefully, the creative team can build on this solid issue and make this book really live up to the hype.