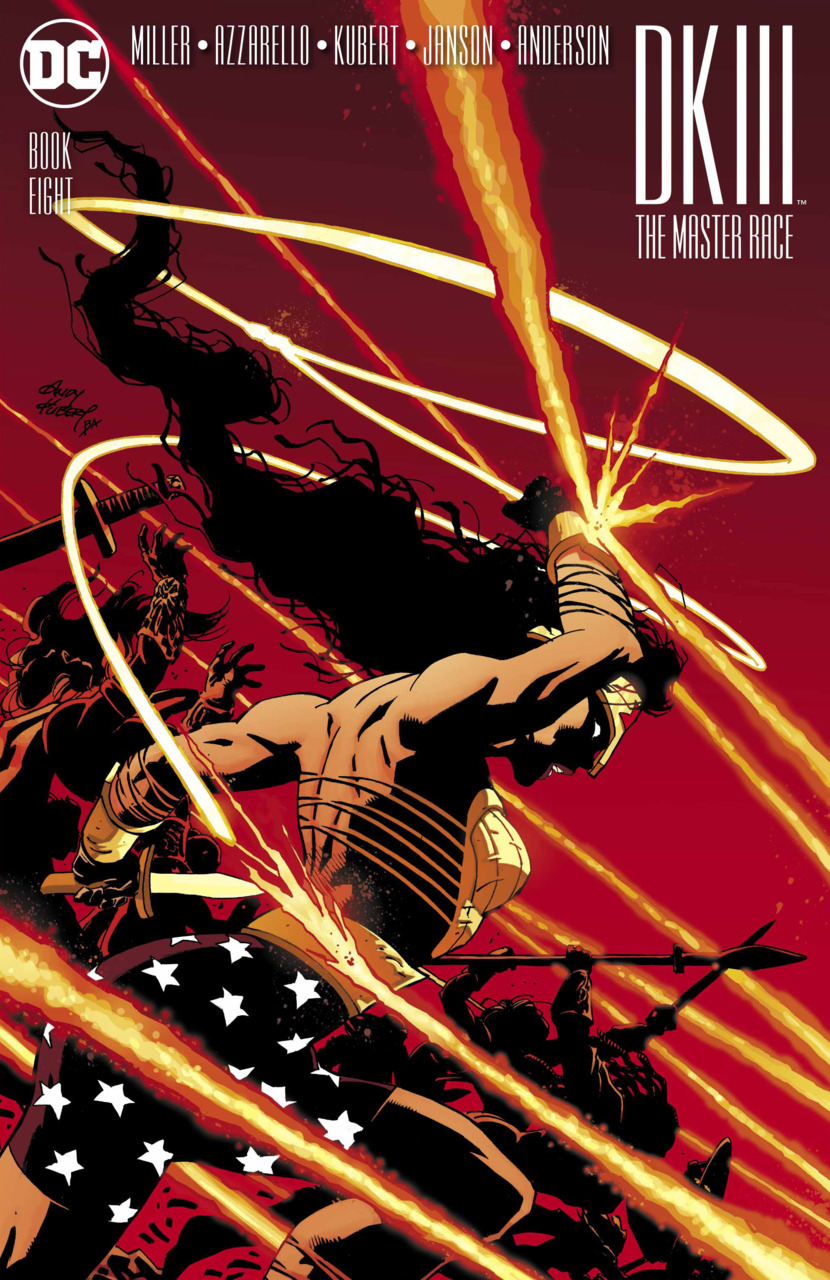 Another three months, another issue of Dark Knight III: The Master Race.  We’re now well over a year into the publication of this book and we’ve reached the penultimate eighth issue.  We ended the last installment with a stolen cliffhanger when Superman dropped a recently assassinated Batman into a Lazarus pit, bringing him back to life with a body in its prime.  Yes, I can’t quite get over it either.  Batgirl and Flash barely get to process the assassination they just saw when Superman and the rejuvenated Batman arrive at the Batcave, interrupting one of the few interesting, though heavy handed, moments in the book where the mourners muse on the role of death in a superhero’s life.  The reunion is short lived as Diana calls to inform the group that Quar’s Kryptonian army has arrived at Amazonia with ill intentions.  We get the requisite new Batmobile (this time an old Batmobile) and then Batman and Batgirl race to the rescue.  Only, they don’t.  We don’t know where they go.  This is the last we see of Batman this issue.  He makes an ever-so-brief appearance and the narrative flips to Amazonia.

The war between the Kryptonians and Amazons has not been built up much, but it’s here.  Lara, daughter of Wonder Woman by Superman, is stuck between both worlds and not making an obvious choice.  There is no hesitation from the rest of the cast, though, as things escalate quickly.  The Kryptonians head into the fray with the arrogance they derive from their invulnerability and strength from the yellow sun, but the Amazons have a rather obvious trick up their sleeve – their powers are derived from a very base form of magic.  If you remember your Superman lore, you’ll realize how problematic this will be for Quar’s forces.  Due to the weakness against magic, a bloodbath of a fight ensues.  The Amazons tear through the Kryptonians and the infant Kryptonian/Amazon Jonathan is safe.  Superman arrives just in time to leave again as Flash relays that Quar’s people have a nuke on countdown.  The end.

That was a whole lot of activity for a story where very little actually happened.  The story suffered from a rigid method of storytelling, with each scene being compact and in sequence.  The entire effort felt more like a fleshed out outline than a final product.  I’d really like the team to experiment more with their storytelling methods.  There is a solid story in here somewhere, and with some editing I think this book could be readable.  Imagine with me for a moment.  Remove the resurrection scene from the end of the previous issue and end it with the cliffhanger of Batman receiving an obviously life threatening injury.  Pick up this issue with Carrie Kelly and Flash processing Batman’s apparent death.  Let them be the bookend.  You can keep Flash’s speech, just expand on it.  Inter cut them with the buildup to the fight between the Kryptonians and Amazons.  Weave in Superman flying Batman’s body to an unknown location.  Let the dramatic tension build up.  Superman can have a narrative of his own, explaining his actions.  The key moments would be the reveal of the Amazon’s magic-related history and advantage over the Kryptonians and Batman emerging from the Lazarus Pit.  Play those moments at the same time.  Finish out the fighting just like we got, but end with Batman on comms telling Carrie Kelly to get her ass in gear.  This isn’t over.  A few small tweaks and this could be a great build-up issue to the conclusion.

That being said, I’m not sure where the story is going to go from here.  Things aren’t very clear despite the linear storytelling.  Solicitations for the final issue invoke the feeling that the planet is on the ropes and the Kryptonians have the advantage.  From the conclusion to this it seems the opposite.  The Amazons appear to have handled the majority of the Kryptonian army and Quar and his immediate allies are launching the last-ditch nuclear option.  The comments I’ve made previously on the artistic style of this book hold true with this installment.  I wish Kubert wasn’t spending so much time mimicking Frank Miller.  I won’t give up hope for this book.  The bones of something good are here.  I want the team to come together and deliver a solid conclusion.  I’m fairly confident we’ll get a thoroughly mediocre conclusion, but I’m an optimist, what can I say?  See you in another few months, Dark Knight III.