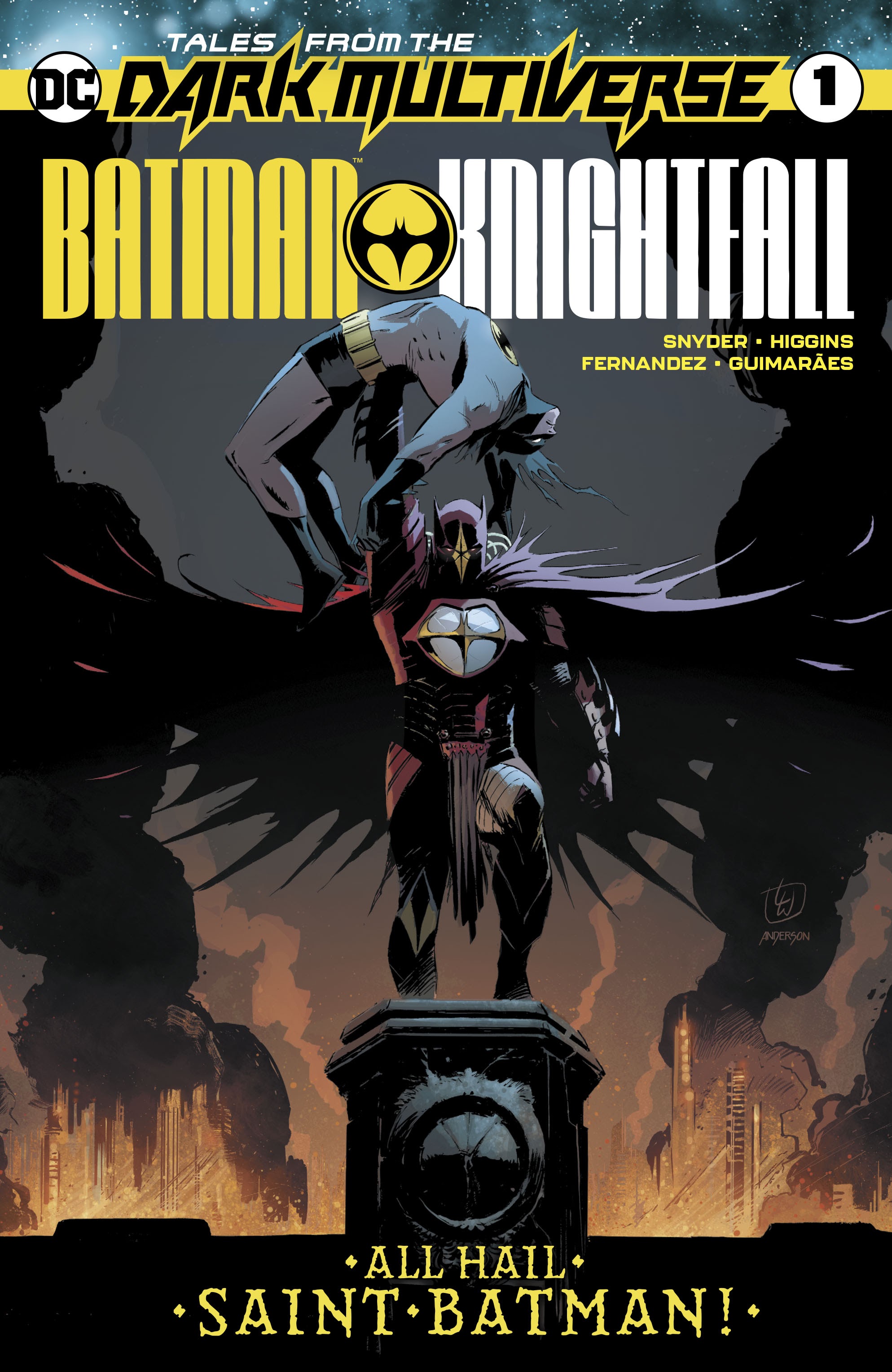 Overview: What would a universe look like where Azrael defeated Batman and kept the mantle of the Bat after the events of Knightfall?

Synopsis (spoilers ahead): Tempus Fuginaut, a cosmic being who can travel between the multiverse, seeks new champions for a coming crisis in the Dark Multiverse. He observes a world in which Azrael defeated Batman after the events of Knightfall.

In this world, Azrael burned Gotham to the ground and rebuilt it in his own holy image. Thirty years have passed since Knightfall, and the citizens of Gotham now recognize a new savior — Azrael reborn as “Saint Batman.”

After the prologue, our story starts with Azrael checking in at the Dumas Home (formerly Wayne Manor). Azrael’s wife, Madeline, informs him that a Luis Ramos was apprehended not too long ago, loaded with enough weapons to cause severe damage to Gotham City. She says the Penguin provided safe passage into Gotham, which has been sealed off from the rest of the world as a Woodrue Pandemic and other calamities wreak havoc around the globe.

Azrael defers judgment of this saboteur to two members of his Bat-Family, Torchbearer and the Cardinal. This evening is his annual meeting with Bruce Wayne, where he asks Bruce to finally yield and agree that Azrael’s way is the correct way. For the last thirty years, Bruce Wayne has never yielded, and so he suffers as a consequence. Only his head and severed torso remain, attached to a mechanical life support system that keeps him alive enough to feel pain.

Bruce tells Azrael that the Batman Gotham needs is one strong enough to withstand a crisis. He points out that Azrael has yet to withstand one and that the constant juicing of Bane’s venom isn’t doing Azrael any favors. Rather, the venom makes him weak and paranoid.

Meanwhile, the Cardinal and Torchbearer deliver justice to Oswald Cobblepot and Luis Ramos in the form of a beheading. Before Ramos is killed, he warns that a reckoning is coming.

This lone soldier introduces himself to Bruce Wayne as Tourne, proclaiming that he’s here to save Gotham. Bruce expresses doubt. As Azrael’s guards enter Wayne Tower, Tourne puts on a mask and juices up with venom, revealing himself to be the son of Bane. Unlike his father, Tourne’s body produces venom naturally, so there’s no need for tubes or a supply. Tourne frees Bruce and says that there’s a plan in action.

At the main cathedral (formerly city hall), Azrael, Torchbearer, and the Cardinal break up an army attempting to seize control.

Underneath Gotham, Tourne carries Bruce’s remaining body through the sewers. It is revealed that Tourne witnessed Saint Batman murder his father. Before Bruce can ask about Tourne’s mother, Lady Shiva appears. She tells Bruce that she is here to help, that under his watch, Gotham was a beacon that brought out the best in people. Shiva puts a glowing box of some sort on the ground and activates it, asking Bruce if he has the will to be Batman once more.

Back at the Dumas Home, a weary Azrael returns in search of more venom, so he can continue to purge Gotham of these heretics. Tourne and Shiva surprise him, and it’s revealed that Madeline let them in. She has lost her faith in her husband, and she can no longer allow Azrael to continue with his mission.

As Azrael, Torchbearer, and the Cardinal get ready to fight Shiva and Tourne, the real Batman appears overhead. Azrael takes on Tourne and Shiva. This new Batman, composed of little nano-bats, kills Torchbearer and the Cardinal. He says that they give him flight and absorb the genetic profile of everyone they touch, using that as a justification that it doesn’t really count as murder.

Azrael disables Tourne with sonic venom disruptors. Shiva takes Azrael down, saying that his desire to control Gotham is really about his addiction more than instilling discipline and order. She reveals that she is Tourne’s mother, and Bane was her lover. She also reveals that Azrael was only able to defeat Bane because he gave up venom long before.

Suddenly, Azrael seizes the upper hand and sends Shiva to the ground. He finds Tourne, rips Tourne’s arm off, and drinks the venom pumping through Tourne’s veins. Batman swoops in to save the boy from death, and Tourne then impales Azrael.

Believing they are finished, Tourne says that they can finally save Gotham and reconnect it with the rest of the world. Batman disagrees. Bruce says that there is no saving it this time, that some wounds never heal. Using his nano-bats, he kills Tourne and Shiva. Batman then turns to a dying Azrael and admits that Azrael was right. He confesses that his biggest mistake as Batman was in trusting anyone other than himself.

“Gotham is mine, and I am hers,” Batman says. We return to Tempus Fuginaut, who calls this incarnation of Bruce “Batman the Broken.” Then Tempus turns away in search of another world to find his champions.

Analysis: There are a few neat spreads by Javier Fernandez here, in particular, a full-page spread of Azrael impaling Batman before usurping Gotham for himself. Other than a handful of shocking images, however, the art is empty. For such a grandstanding story and interesting concept for a world, we’re shown very little of Gotham. Most of the backdrops are dark, gray, and drab. We see more of stone walls and subterranean sewers than we do of this majestic Gotham Azrael supposedly burnt to the ground and rebuilt. Saying it in exposition is one thing, but seeing is believing.

The character work is lacking too. Other than a neat costume concept for Saint Batman, there is a lack of detail that makes every character come across as hollow and undefined. Together, both of these art issues feed into the biggest problem with this one-shot — there’s no tension or real momentum. Scott Snyder and Kyle Higgins set out to tell a bombastic epic, but we don’t see it, and we don’t feel it. One wonders if the story is too big for the pages allotted, as the moments it focuses on are less interesting than the setup we’re given in Tempus Fuginaut’s exposition.

How Azrael burnt Gotham to the ground and rebuilt it again, thus becoming Saint Batman, is an interesting concept that could take us on the journey of a disciplined, devout superhero succumbing to addiction. Instead, it’s one of the many plot devices in a vehicle setting up this idea of Batman the Broken, a character we’re not shown much in this book. Other than a couple of conversations, we don’t know this Bruce. We don’t feel what he’s been through. We hear horrors of his life thus far, but to readers, he’s a wholly new character that’s very underdeveloped and barely seen. His name reveal is nothing more than a last-minute tease to some future crisis.

That’s a crucial point to this issue’s failure. Until the very end, we don’t know that Batman the Broken is the main character we should be focusing on. For a while, it’s Saint Batman. Then it’s Tourne and Shiva. Crammed together into forty-eight pages, these characters are more plot devices than they are characters, serving a grandstanding idea that rings hollow and only seems to feed into an “event” further down DC’s editorial plan.

Final Thoughts: There is a great idea at work here, but unfortunately it’s buried beneath a convoluted plot with no characters and uninteresting art.