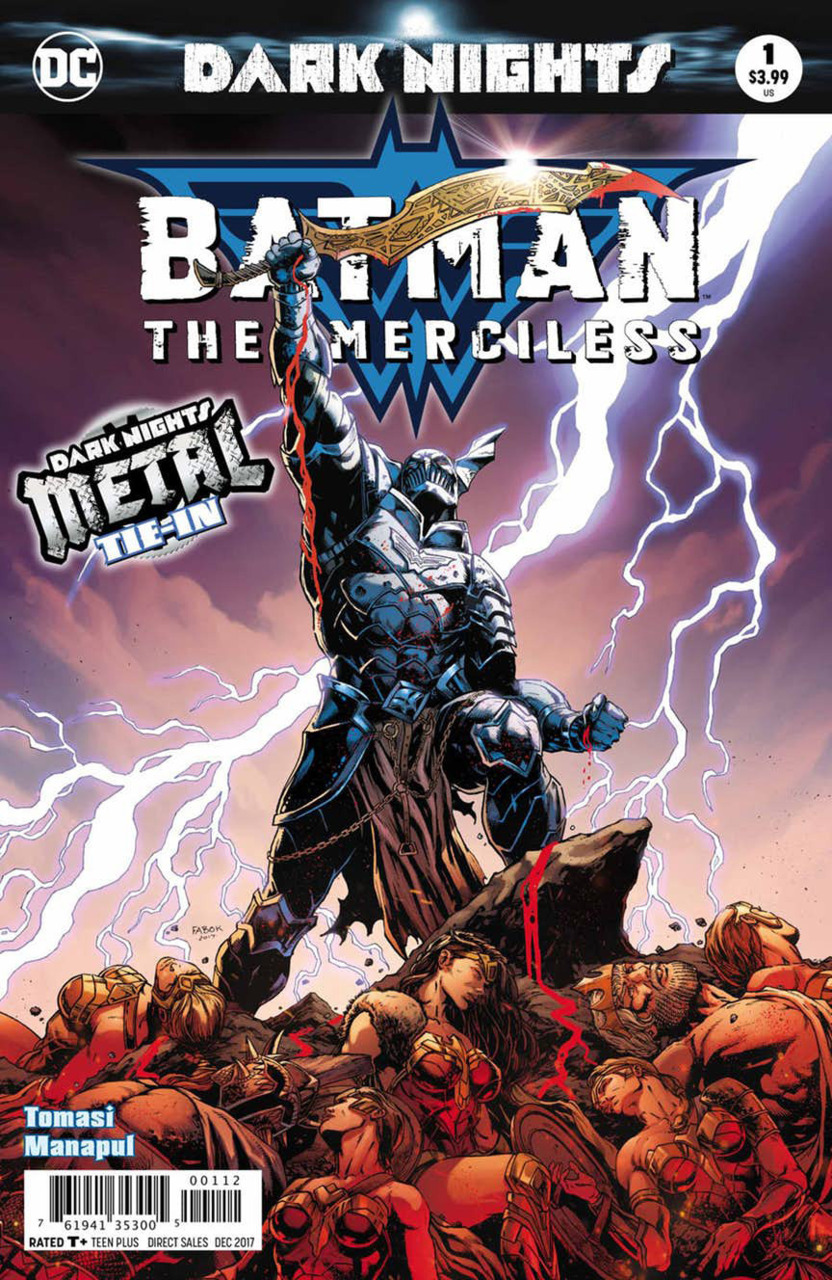 Overview: Batman gets a new hat and then eats a bomb.

Synopsis: Langley, Virginia. HQ of A.R.G.U.S. – the War Room. Sam Lane, Amanda Waller, Steve Trevor, Father Time, Mr. Bones, a Colonel Jonas, and a random seventh person, whom I don’t know, are all discussing a plan of attack against these “nightmare Batmen”. However, they are interrupted by Merciless. He storms through the building, killing all in his path, giving them a quick and respectable death in battle. As he does so, he is reminded of his past self. His oath. His morals…. it seems so petty to him now. Lane makes a quick decision and makes his way to a control pad and presses a button. He knows what Merciless is after – Valhalla. A nuke. But he won’t let him have it. Instead, he’s going to drop it on his head. Steve Trevor has a problem with this. A decision to kill millions of people was made by one man in a split second. However, Waller and Bones say that the math makes sense, as billions of lives are at stake.

We see what happened long ago, on Earth -12. Ares forged a helmet that increased his powers a hundredfold. It took the League two years to reach the front lines where Ares stood. They vowed that they’d kill him and destroy his helmet. None of them expected to survive, but they did… except for Diana. In a last-ditch effort to win the war, Batman took the helmet and donned it himself, giving him the powers of a god. He kills Ares, and heads to Mt. Olympus, where he kills the other gods as well. Once he is through, the Batman Who Laughs shows up and invites him to his crew, telling him this world is about to die. He accepts, and when he crawls through the portal into the main DC Universe, he can’t bring himself to look at Diana, as Barbatos drains her power from her body. Instead, he walks right past her and heads to a shrine underneath the tomb of Hath-Set. It tells the story of the Bruce Wayne of this world. Carvings on the wall telling of Zero Year, the Court of Owls, Death of the Family, and Endgame. It shows Bruce coming back, and getting the vision of what was to come, and the Dark Knights making their way to this world along with Barbatos.

In the stratosphere, a bomber gets the signal to drop Valhalla on Langley. The group wonders if it’s the right thing to do, but they follow through on their orders. Valhalla makes contact with the ground, but it’s energy is absorbed by Merciless. He sits on his throne of rubble, with all the members of the War Room bowing down to him, praying to their god – the God of War. He could make them all fight to the death, but that would be merciful. So instead, he’s going to make them watch as he conquers their world. He carved into a rock, adding to the story of Bruce Wayne, but of his version. He recalls Diana warning him of the helmets’ power. That once you put it on, you’ll never take it off. He takes his helmet off, and sets it to the side. He confesses his love for Diana, as he finishes his sketch of he and her kissing. He apologizes to her as well. When he realized she she hadn’t been killed by Ares, he felt relief. But then she reached for his helmet and tried to take his power away. He had to keep it in order to truly live up to his oath.

As he grabs Steve Trevor by the throat, he’s reminded of the man he used to be. Mercy and restraint; the reasons he’ll loose.

Analysis: Peter J. Tomasi’s script here is amazing. With some of these other one-shots, we get the origin of how the Dark Knights got their powers, but don’t really get the emotional draw for them to do so. For instance, in Red Death, we just jump in to this brutal broken Batman attacking the Flash – attempting to steal his powers, but don’t understand why he’s broken until halfway through the comic. Here, it hints at it right away, and continues to reveal more and more as the book progresses. It really dives into this Bruce’s psyche and thought process, while the others haven’t nailed that as well. I really understand what this Bruce wants, and then I see where he’s been corrupted. He feels human, and that’s what Tomasi is so good at.

I’ve mentioned several times in my reviews of Metal, how certain things have called back to my favorite animated DC shows – here, it again calls to mind the shipping between Batman and Wonder Woman in the Justice League series. Now, although it’s much more prevalent here, it still draws the connection in my mind and I loved it. That relationship always made sense to me as to why the two would be attracted to one another, although, Batman never thought it was a good idea to act on it. In this story, that humanizes Bruce. It adds to the tragedy of him loosing her and it also shows the monster he’s become.

Francis Manapul just might be my favorite artist right now. Not only can the guy tell a story through pictures alone, but it’s also BEAUTIFUL. His structure is simple, using basic shapes to create a figure. Nothing flashy there. Where he adds his detail is through the inking process. Even at times washing the inks to add depth. A few years back, he started coloring his own work, and I was skeptical. I’d never heard of a guy doing ALL of the art – although, I must admit, I’m still fairly new to comics, but seeing the colors in this, it’s some of the most interesting and gorgeous work in the industry.

Tom Napolitano letters this issue, and does an excellent job here. Although I don’t care for Merciless’ font choice (as it gives him an accent in my reading of it, when it’s just Bruce’s voice), but his placement was on point and he did well with what he was given.

Final Thoughts: Batman: The Merciless is a great example of how to build a villain; make him scary, humanize him, make us understand him, and then have him stab us in the heart. I really enjoyed this issue.