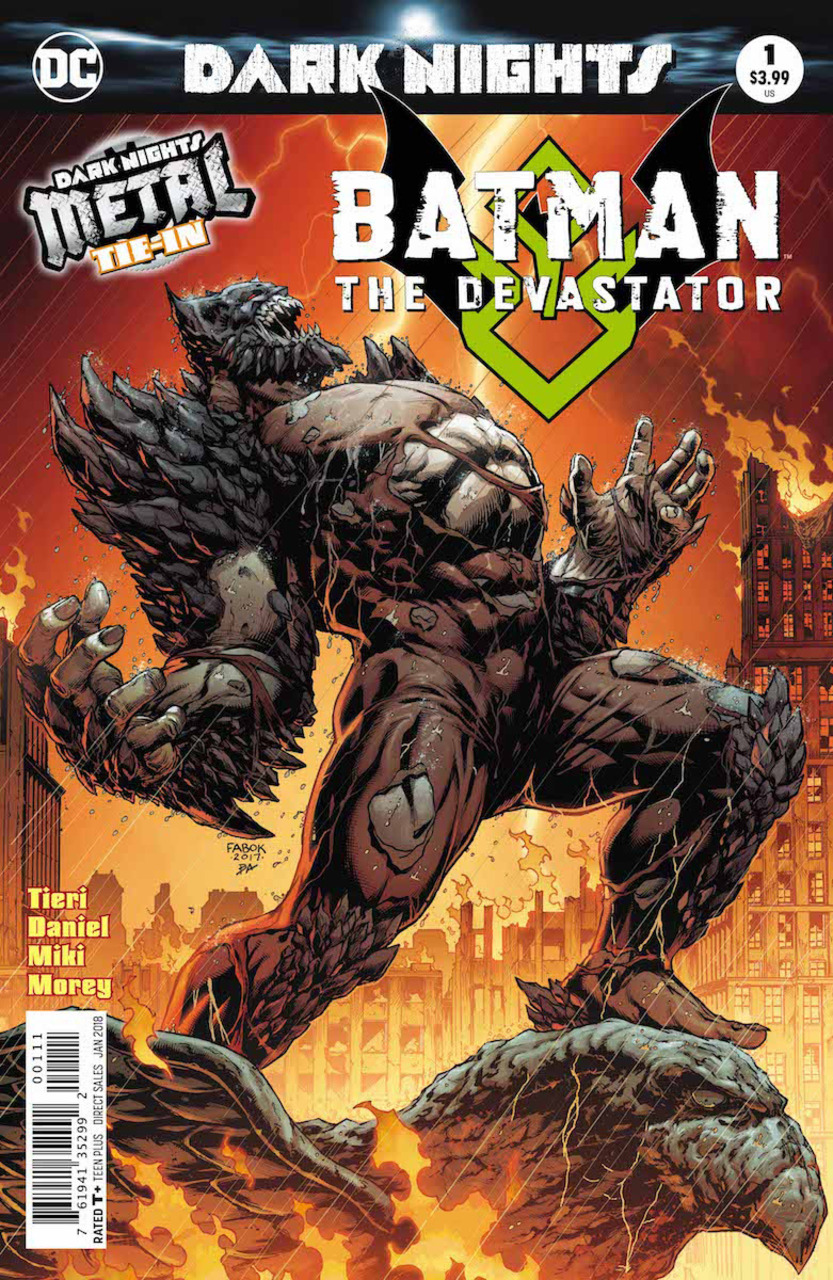 Overview: Superman’s family faces one of their worst nightmares: an evil Batman combined with Doomsday.

Synopsis (spoilers ahead): The Devastator, an evil, bone-covered Batman, narrates the story of his quest to steal the Cosmic Tuning Fork from Superman’s Fortress of Solitude, over scenes of him battling Lobo after defeating the rest of the Justice League of America. Skewering the mercenary with a hook, the Devastator seems to hurl him into the sun.

Meanwhile, in Metropolis, Lois Lane reassures Jimmy Olson that despite Superman’s disappearance, she believes the heroes will win. However, when Bruce Wayne shows up and shakes Lois’s hand, it turns out that he’s the Devastator in his human disguise, infecting Lois with the Doomsday virus so that she too will be safe from Superman.

The story flashes back to Batman on Earth -1, one iteration away from “our” world, Earth 0. On this Earth, Superman has gone evil, murdering all of the heroes and even his wife, until only Batman is left. After losing one arm, Batman reveals his last resort – the Doomsday virus infection for himself, turning himself into the Devastator. The warped Batman wishes he’d infected the whole world with the virus to prevent Superman’s reign of murder, but the Batman Who Laughs greets him amidst the wreckage, offering a chance to save a different world. Our own.

Lois’s relationship with Superman, being exposed to his solar energy, gives her some resistance to the virus, enough time for Supergirl, Superwoman, and Guardian to arrive to fight the monstrous Dark Knight. Lois orders Jon, her son and the current Superboy, to lock her in their saferoom while she transforms into a Doomsday Lois. The Devastator apparently defeats Superman’s family of allies, and creates a strange portal in space, revealing unknown horrors to the world.

Analysis: Veteran backup and pinch hitter writer Frank Tieri alongside name-brand artist Tony Daniel provide a solid, if compressed, Dark Knight one-shot. Daniel’s art is appealing as always, his rendering of Lois in particular as a confident, loving character caught in forces that would tear anyone else to pieces. Tieri’s narration for the Devastator provide a solid picture of the emotions of a Batman betrayed by his best friend, the symbol of all that is good and light in the world. The imagery and setup feel a bit secondhand – Batman wields a spear that seems ripped from the film Batman v. Superman, and the whole “Superman goes evil” storyline doesn’t seem to distinguish itself much from the Injustice storyline (except for compression). However, on the whole, there’s more actual story here than in Batman: The Drowned. Perhaps a bit too much – maybe to avoid from stepping too hard on the actual Metal storyline’s toes, maybe to wrap things up for a one-shot, but the fight between the Devastator and the Super-Friends who show up is completely glossed over. A welcome change after the pointless slugfest (and colon collector) that was The Drowned, but perhaps erring too far in the other direction.

Final Thoughts: Though suffering a bit from tie-in syndrome, Batman: The Devastator provides an enjoyably dark look at a Batman who destroyed Superman.