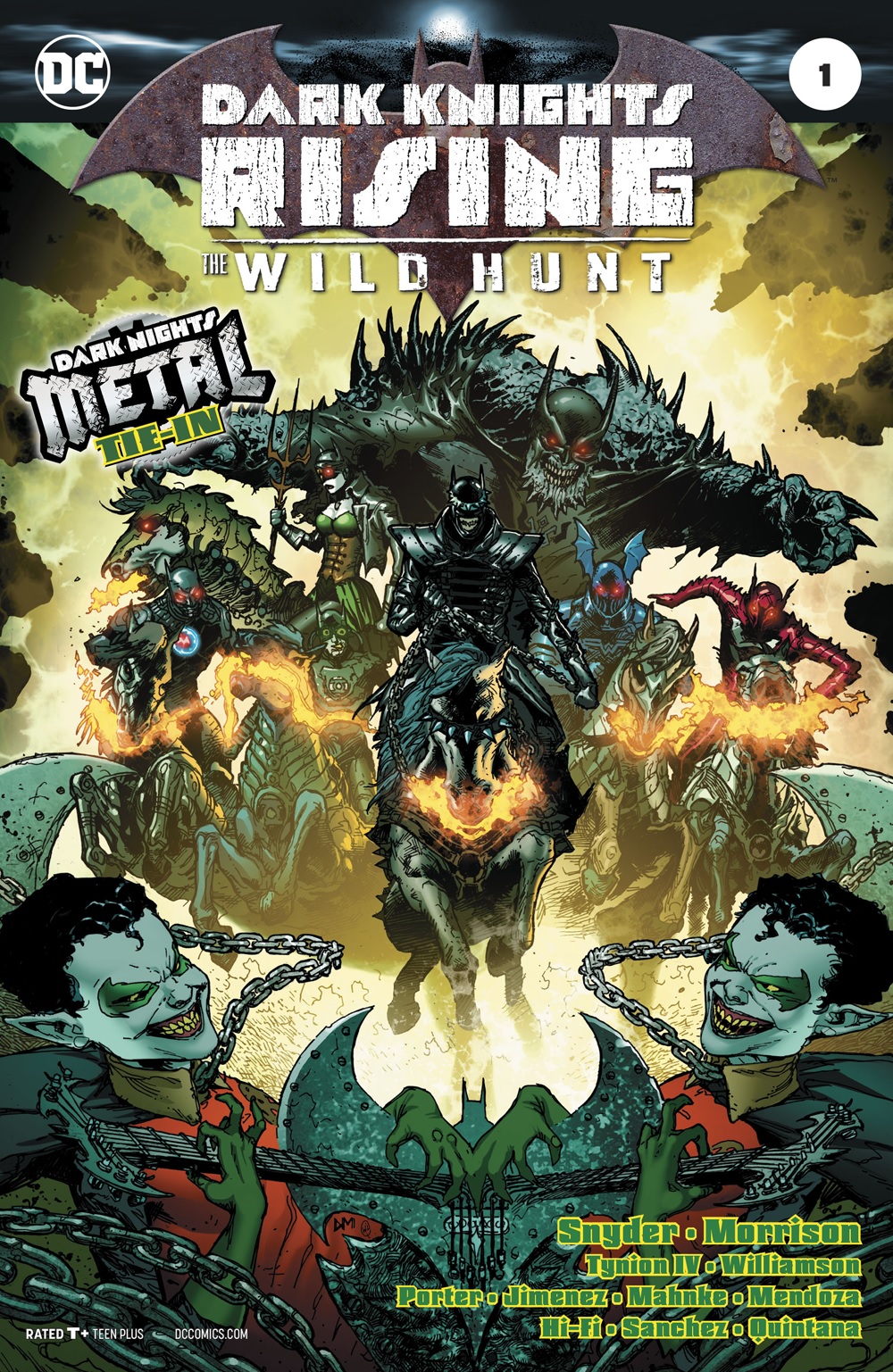 Overview: The remaining members of the Justice League pick up good vibrations until they don’t. Then do and it gets really confusing.

Synopsis (spoilers ahead): We open with Detective Chimp looking at the map of the Multiverse. He reflects back on his early days in the circus. He’d play the notes D & C over and over again on the accordion. He talks about how he was treated cruelly by everyone except one man, and that man was killed for it. He talks of his escape into the nearby swamp and his discovery of the Fountain of Youth. It healed his wounds, made him younger, and gave him an intellect he never possessed before. He returned back to the circus and using clues, he was able to find out how they killed his friend. He reported them to the police and all of them were arrested. He’s never looked back since.

Barbatos lets out his howl. An alarm announcing the impending doom that awaits this world as the Dark Knights begin to take action.

Back at Blackhawk Mountain, Detective Chimp continues to observe the map, while Red Tornado and the Metal Men are, I don’t know, recharging their batteries? With his help, some of the greatest minds in the universe have sent a group of hero’s to the center of the multiverse — that is, the House of Heroes. T.O. Morrow, Will Magus, and a slew of other scientists of the DC Universe are observing the changes occurring to the physical world, while also noting that Detective Chimp is quickly losing his mind. They note that the boiling point of water is now only 106 degrees & they have cooked a hard-boiled egg at that. (Look, I’m no scientist, but I don’t think that’s how that works. Changing the boiling point of water wouldn’t also change the cooking point of everything else. If that were the case, many people in the DC Universe would actively be burning alive unless the temperature of the Earth has changed and everyone survives with a lower body temperature and now I’m just spending way too much time on this. I mean, I still don’t know how Superman is able to fly.) Morrow asks the group if they will be heroes or villains.

Detective Chimp attempts to radio Flash and Cyborg but gets a response that is too broken up to understand.

What is actually happening is that Flash is yelling “Mayday” and that everything and everyone is going to die just to get their attention. Victor is flying the Ultima Thule, which is a giant flying kazoo spaceship. Raven is searching for the House of Heroes, but she can’t find it. They are riding on the sound waves of music, but with the turmoil in the multiverse, she’s getting a lot of feedback, making it different to find the right frequency. However, the Dark Knights are on their tail, firing ballistic missiles at them. Merciless is beating a microverse to power their own ship. Drowned and Dawnbreaker enter the Thule throw a boom tube opened by Murder Machine. The two attempt to kill Raven, but she turns the tide, using Dawnbreaker’s constructs against them.

Meanwhile, Flash makes his way on the Dark Knight’s ship and releases their hold on the microverse, letting it unleash and grow. Red Death shows up just as the microverse begins to expand in explosive bursts, reversing Red Death’s persona, allowing Barry to be in the driver’s seat while Bruce is in his head. He teams up with Flash to take down Merciless. The new Red Death tells Barry to go. He has to stay behind to make sure they don’t recapture the infant universe, at least until it’s too large for them to recapture.

Laughs contacts Red Death. He tells him that he was only ever half a Batman, so they only gave him half the plan. The missiles they fired were powered by miniaturized Dark Baby Universes hand picked by Barbatos… his universe was among them, and as the missiles explode, so does Red Death.

Detective Chimp is having trouble speaking at this point. The scientists are cheering the heroes on, thinking they’ve won. But Detective Chimp isn’t so sure. His eyes glow, and he suddenly knows what to do. He rushes over to Red Tornado and activates him. He tells them that the House of Heroes is a trap. That instead, it was the door to the Dark Multiverse. They let Barbatos in.

Back in the Ultima Thule, Flash appears back inside the ship, telling them that they can go now because Red Death saved them. But the Dark Knights sabotaged their ship before they leave. Cyborg can no longer steer it. They weren’t hunting them — they were aiming them. They’ve gotten a response to Flash’s SOS signal, but it’s too late.

The Dark Knights want to open a door (or portal) and get out of there so they don’t die from the explosion, but Laughs wants to watch… he wants HIM to watch. They bring his prisoner to him and places “Only the most powerful being in the Multiverse, perhaps…” on his knees at his feet. Dawnbreaker notices the signal that is being sent to the Thule, it’s from the fifty-third universe. Laughs holds the prisoner’s eyelids open, and makes him watch all hope die faster than he can say “door”.

The scientists are acknowledging that the end of the world has begun, and Detective Chimp goes crazy. He sees Stubbs appear (the pirate monkey from Grant Morrison’s Multiversity) along with an ape-Justice League. The Batchimp explains to Bobo (Detective Chimp’s name is Bobo… that would have been a lot easier to type out this whole time) that the chords D-C mean Detective Chimp. They bring Cyborg, Flash, and Raven through a “door”. The apes are from the future & they can help Bobo save the world.

Analysis: This issue was bonkers crazy. Scott Snyder, Grant Morrison, James Tynion IV, and Joshua Williamson all get credit for the script. I’m gonna guess that Tynion plotted the thing out and Williamson wrote the dialogue while Snyder and Morrison oversaw the whole thing. I need to go back and read Multiversity, because this series is so heavily reliant on it. Up until this issue, I didn’t feel like it was required reading, but I got confused at some things that were going on here. Detective Chimp is a fun character, and he gives me some Planet of the Apes vibes, but I didn’t know he was going to be so vital to this story. I really don’t know how the finale is going to wrap up with all this.

Howard Porter, Jorge Jimenez, and Doug Mahnke with Jamie Mendoza all get art credit here. I was showing my wife a Howard Porter Flash cover recently. The guy is amazing. I personally think his work is better than ever. Also, I never knew I wanted a Howard Porter Swamp Thing book before, but a single panel made me want it so bad. Jorge Jimenez is awesome. I love the character and personality he puts into his characters. That first splash page tells you everything you need to know about the Dark Knights. Their character designs along with their body language give it away. Also, I need this guy on a Flash book. DC can thank me later. I think if Doug Mahnke were to have a different inker other than Jamie Mendoza — like, say, Mick Gray, the art would have a much more animated feel and match the tone of the other two artists better. Now, that isn’t a criticism of Mendoza, as the guy does good work with Mahnke, just an observation. All the different artists’ styles do clash, and there are times when scenes blend together, so a scene will switch artists. It doesn’t matter how good the art itself is, a change like that is noticeable and doesn’t leave a good impression. I kinda have a rule that if a book has more than three names on the cover, it’s not going to be good. The constant art changes hurt it more than anything.

Hi-Fi, Alejandro Sanchez, and Wil Quintana all do great jobs here. Hi-Fi’s stuff all takes place during the daytime, so he has a lighter tone to his colors. Sanchez works with Jimenez, and has a lot of dark colors, but pairs them nicely with vibrant lighting when he can. It balances the page nicely and the guy is excellent with the light tone. Quintana does a nice job coloring as well, however, his stuff feels darker even in the lighter scenes. His definition was a bit extreme at times, especially with skin tone, but it was never distracting. However, with his help, I think I’ve figured out who Laughs’ prisoner is. Let me know who you think it is in the comments down below and I’ll try to respond down there myself before Metal #6 comes out. Clayton Cowles does an excellent job lettering, I just still hate that red scratchy font over black bubbles. It’s just too freaking hard to read.

Final Thoughts: A fun and very confusing ride, but one that has me anticipating the finale of the DC Universe as I’ve known it.