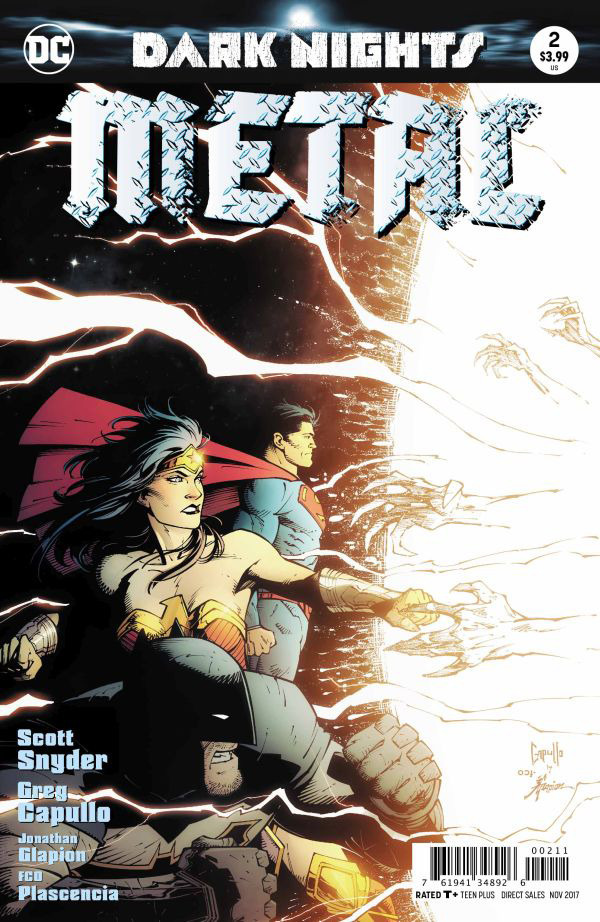 Overview: Batman plays world-wide hide and seek with the Justice League, and then turns into a door.

Synopsis (spoilers ahead): The Justice League are searching all over for Batman. Superman is just out of orbit, looking down at the earth. He sees hidden metals causing bat-symbols to light up across every land mass on the earth. They have everyone searching for him so that they can prevent what is coming, but also protect him from the Blackhawks. Green Arrow is searching in Gorilla City — nothing. Zatanna and Constantine in the House of Mystery — nothing. Blue Beetle searches Lexcorp — nothing. Cyborg radios Superman. They’ve found him in the Amazon Rainforest. He, Wonder Woman, and Aquaman are giving chase but there is a problem… there’s four of him.

Damian is driving a giant armored van (and having difficulty seeing over the steering wheel, I might add), while four Batmen (Batmans?… how does one say multiple Batman?) drive along on their makeshift land/watermobiles. Aquaman takes one out, holds him down & checks his backpack for the weapon he’s stolen…nothing. Flash shows up, takes out two Batmen, checks their bags — nothing — gives us a Flash Fact & then is taken down with a Bat Fact.

They corner the final Batman while having all the others tied up. Cyborg is able to decipher the Bat-Family’s digital masks and can see that the final one is Nightwing (Batwoman, Batgirl, Red Hood, and Batwing are the other four in case you were wondering). Green Lantern tries to talk some sense into Nightwing. If he took what they said he took, then they need to take him in. That weapon is too dangerous for anyone in this universe to possess. Nightwing fesses up and pulls out a flower out of his backpack. The locals call this flower “The terrible green beat-down”. He tosses it, and takes off, as Swamp Thing (RIP Len Wein) grows out of the ground and takes the League down there.

Superman can recognize Bruce’s heartbeat and swoops down, rippping through the armored tank and flies into the sky, taking Batman (who was sitting in the back with Damian driving) with him. Batman tries to explain to Superman, but Superman just doesn’t get Heavy Metal. Batman tells him that Barbatos has been watching him, prepping him for this. He has introduced four of the five key metals into his system that will allow Barbatos to come through. The first was the Electrum in the drugged water in the owls labyrinth. The second was the Dionesium in his fight to the death with Joker. Third was the Promethium which was the machine that gave him his memories back. And the fourth was the Nth metal in Dark Days, the prelude to this book. Wonder Woman breaks free and makes her way to the two. She doesn’t believe Batman. She knows he’s lying about something. Clark gets angry, and punched through Batman!… Except it’s not Batman, it’s Clayface. Bruce had a transmitter placed inside Clayface, broadcasting his own heartbeat through him. Clark has never seen Bruce this scared before and it’s scaring him. Diana says they’ll find him. Even if they have to travel to the ends of the earth.

Meanwhile at The Ends of the Earth, Kendra enters the Finnisterre, a secret super-villain lair that arises from the lava pits of the Antarctic. She meets with those in attendance to exchange some information. She’s getting desperate. Among those at the meeting Phantom Stranger Wizard, Morgan Le Fay, Ra’s al Ghul, among others all lead by Vandal Savage. They have a plan to destroy the dark multiverse by firing Anti-Monitor’s astral brain at the Rock of Eternity… they want no part of this. Ra’s voices his opinion, stating that Batman is going to try to take on Barbatos right then and now, but Kendra now knows where to go.

Batman arrives in the Valley of Kings (aka – the tomb of Khufu). He feels Dream’s presence, and asks him if he’s doing the right thing. Dream tells him if the nightmare army succeeds and the world goes dark, to call to him, and he leaves. Batman picks up Hawkman’s mace just as Clark and Diana arrive. They tell him to ‘surrender the bag, that device has killed entire worlds before. Batman says he knows, and pulls out baby Darkseid. Batman plans on using his Omega Beams to take himself back to the beginning of time (for the second time, and even Batman acknowledges this), where Barbatos first put all this into motion, but he has to hurry. Grail will be looking for him. He asks them to take care of his family. To help Damian become a better man than he was.

Kendra radios in. She tells them they have to all get out of there. See, Batman thinks he’s in the Tomb of Khufu, but he’s not. She destroyed that tomb decades ago. They misdirected him, and he fell into their trap. This isn’t the Tomb of Khufu, it’s the Tomb of Hath Set.

The ancient priests known as Strigydae use mystical powers to render Clark, Diana, and Bruce immobile. A few members of the Court of Owls show up. They tell Batman how the Court became known as the Judas tribe because they betrayed the bird clan for the bat. Now, they’ve finally fulfilled their purpose of bringing the Bat God from the darkness he’s been trapped in. They take baby Darkseid from him, and add the final metal… Batmanium. The new element created in the Superheavy storyline.

Batman essentially melts, and leaves a portal in his place. Batman just became a door. Three demonic possessed looking Robins jump out and begin eating the three Owl members. Diana calls out for Bruce, but is met with seven Batmans (Batmen?) responding. Aqua-Bat, BatDoom, Cybat, Bat-Joke along with his human-eating Robins on chain leashes, BattleBat, BatFlash, and Green Batlern. Now you know not to leave me with the responsibility of naming things… Barbatos then begins to torture Clark and Diana. As they shrivel up, we close out with Bat-Joke’s smile.

Analysis: So Batman has seemingly been dispersed among these various entities. I could be wrong, but that’s how I took it. Scott Snyder has delivered with this series. It’s everything I hoped it would be. It’s crazy. It’s ridiculous. It brings back everything you loved about the DC Universe. We are reintroducing old characters for the first time since the New 52. Now some of those have been reinvented, but I’m enjoying the ties that are being developed here. I don’t feel like EVERY superheroes powers are explained via metal, although that is the case for some. But I do enjoy the cohesive feel and that this epic story creates. It makes everyone feel as though they have a stake in what’s happening.

The references in this book are just amazing. It’s Easter egg after Easter egg, and even though I’m not catching them all, I love that they are there. I was thrown off a bit that we didn’t get Dream in the beginning, but was thrilled once he showed up later with the hinting that he would be back if that one bad thing happened… and then it immediately did. I loved all the direct ties to Snyder’s run on Batman so far with the various metals and how it ties in here, along with mixing in Grant Morrison’s multiverse. It just feels like an epic that is deserving of all the characters in this book. I loved the super-villain hideout. Last issue had me thinking a lot of the Justice League cartoon when I was a kid… this issue kept giving me Young Justice vibes, and I’m pretty sure it’s because of the super-villain hideout with Vandal Savage leading them all. Also, the continuity of baby Darkseid and Grail’s mention was spectacular. I wondered how long it would be before that was mentioned again, because Geoff Johns’ Darkseid War was amazing… although, I am trying to remember if Darkseid was turned into a baby by story’s end, or if he was a hulking man. I can’t remember, but it doesn’t matter because I love baby Darkseid. Just the thought that the most dangerous thing in the universe, the most evil thing in the world right now is a baby is just awesome, and super relatable to my current situation in life. Snyder’s pacing in this book is extremely intense. By issues end, my heart was pounding… I may have been sweating a bit too. I mean, Batman pretty much died. Now he’s going to come back, probably next issue, but we just watched him get turned into a door and die.

Greg Capullo is just amazing here. His action is super exciting. His designs are beautiful on everything from costumes to architecture, I love seeing the reigns taken off this guy and turning him loose. He is the equivalent to Bat-Joke’s rabid Robin’s. His acting is super engaging and intense. This guy can draw anything. His camera direction also helps keep the page interesting, and he keeps the panel counts high, racking up the tension throughout the book. After the second page, I decided I want–no–NEED a Scott Snyder/Greg Capullo/Jock Hellblazer book… and by page six realized I need a Swamp Thing book as well, so let’s just put this team on a Justice League Dark book after this and let them kill it.

Johnathan Glapion’s inks are killer. Miki is still a bit smoother and more deliberate with his lines, but Glapion captures Capullo’s pencils in a more direct way. Either way, these guys still make the art look great, and I can’t wait for more. Lots of things happen in this issue, and we travel to lots of different places. FCO Plascencia’s colors help you to keep track of all of this subconsciously. My personal favorite is when he gets daring and uses lots of pinks, purples, and oranges toward the end of the book. The guy is just amazing. I don’t think there is anyone in the industry who sets up a scene like FCO does. I’m assuming Steve Wands letters this book, but I’m not one hundred percent…. there wasn’t a title card with credits anywhere in the book. I’m not sure if that was intentional or not, but regardless; no mistakes here, letter placement is on point, and again – then end of the book is where he flexes his muscles. The font, color, and language of the chants were a bit creepy. And his font choices for all the various Bat men and woman were spot on in matching their aesthetic. As for Barbatos letters, there is no word ballon. It’s just straight letters over pictures. Usually, this doesn’t work, and makes it hard to read. Here, it was clear as day reading it. Well done, good sirs!

Final Thoughts: We are only two issues in, but each time I’m on the edge of my seat, picking my bottom jaw off the ground. If you want to get the full comic experience in one book, this is what you need to be reading.