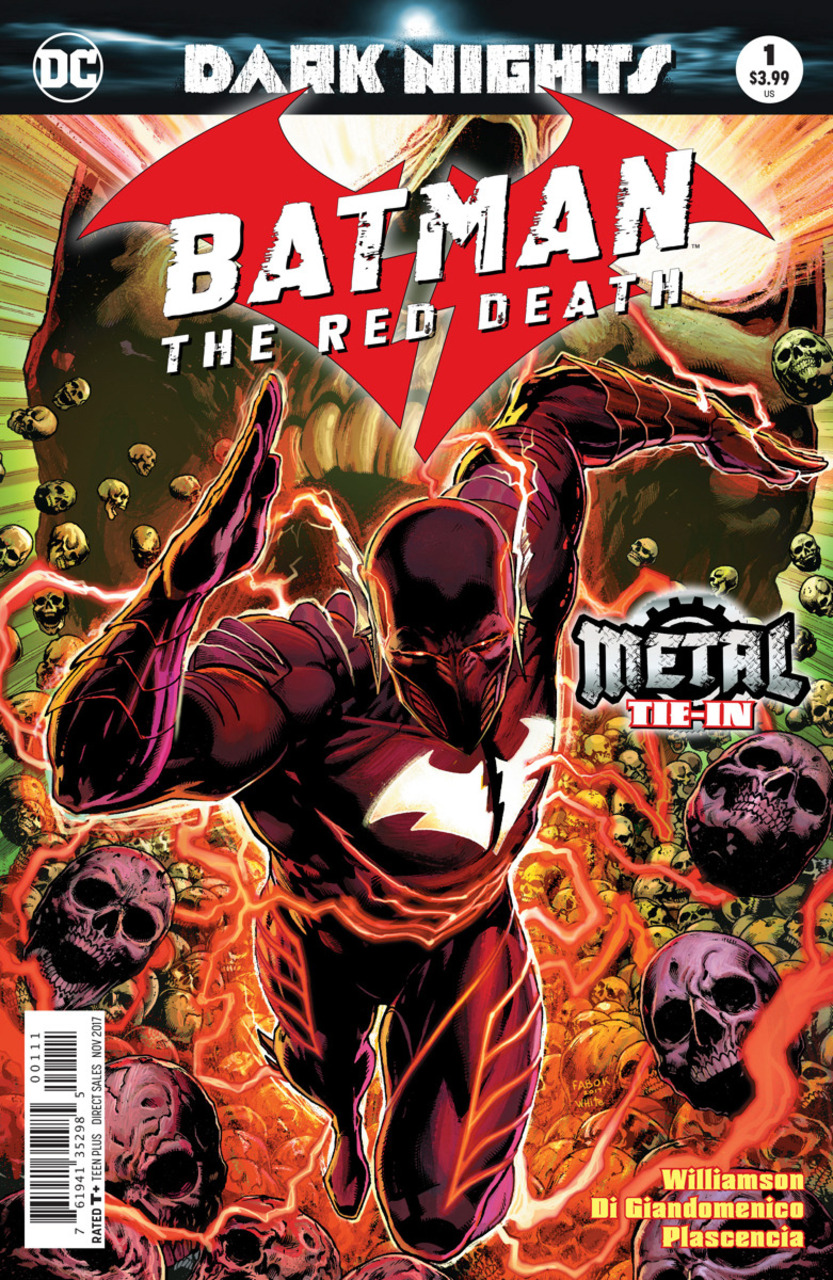 Overview: The origin of the Red Death is revealed, as he wreaks havoc in the main universe.

Synopsis: We open with a monologue from the Batman Who Laughs, explaining how worlds in the Dark Multiverse are created. Out of every fear, a world is born. A world that is disgusting and ugly. These worlds don’t last, because they are rotten at their core. It’s all a big joke.

In Central City, an anomaly is taking place. The sky has turned red and people are falling upwards toward the sky. Flash is running around, trying to keep the city together, but Batman is in his way. This Batman is broken. He lost all of his sons; Dick, Jason, Tim, and Damian. He’s angry at the world. Angry at himself for not doing anything and everything he had to do to keep people safe. He won’t let that happen again. He’s taken up the Rogue’s weapons and is attacking Barry with them. He decides his toys are better, and breaks out a tank. Barry takes him down pretty quickly and tries to reinforce their need to work together. Batman uses Barry’s compassion against him and injects him with the cryostasis formula used by Nora. Batman knows it’ll only be a few seconds before Barry burns it out of his system, but that is just enough time for Batman to knock Barry out.

When Flash comes to, he is strapped to the hood of the Batmobile with a modified cosmic treadmill for an engine, and the two are racing through the speed force. Barry pleads with him to stop. Bruce apologizes, saying that now they can save the world together.

In Gotham City, whatever was happening in Central City has spread to Gotham. The city is in chaos, mutants are terrorizing people, and Scarecrow shows up. Before he can kill a couple, Red Death (Batman/Flash mixup) shows upend kills him first. He runs around the city, quickly snuffing out all the other villains in his rogues gallery before seeing the world start to implode on itself. Barry is still clearly in Bruce’s head, and the two fight for control, however Bruce generally wins out. The Batman Who Laughs appears and preaches the good word of Barbatos, who has sent him to find heroes to conquer the world that is destined to live. They abandon their world (Earth -52), and head to Earth-0.

Red Death arrives in Central City and is drawn to Iris and Wally. The two, as well as the Flash (once he shows up), all begin aging rapidly. Flash recognizes Batman’s voice and asks if this is what happened to him after he left Blackhawk island. Flash trusts that Bruce still has compassion, but he doesn’t know that this Bruce has lost his compassion. Before Red Death can hit Barry, Doctor Fate shows up and teleports Barry away. Red Death decided a to make Central City into his Gotham and somehow transports his Gotham on top of Central City. The Batman Who Laughs tells us that one bad day could kill a world. But one bad week could kill a multiverse…

Analysis: Joshua Williamson does a decent job here in his script. He delivers a nice origin as well as progresses the plot all in twenty pages. I do wonder if we could have used an extra issue or even done an oversized issue here to go a little more in depth, as I think it could have made for better storytelling. It’s just a lot for Williamson to do. He shows us why this Batman is broken, and in the first read-through it feels rushed. However, the second time around, you get the pain that’s driving him. This is a guy who lost everything, built from the ground up, and then it all crumbled down again… and being Batman alone wasn’t enough to save it. This pain, creates a different path. The one Bruce fears. His letting go of his morality and steal the life of someone he calls a friend in order to get the job done. That’s some pretty powerful stuff, and this comic throws you right into the thick of things. Also, the fact that Bruce has Barry Allen trapped inside of him, sometimes comes out, and also gives voice through interior monologue really shows you how far gone Bruce is. It also adds for a great storytelling mechanism that isn’t quite taken advantage of here, and instead relies on the Batman Who Laughs. Again, I’d like to have seen a little more, but then, we are supposed to get the fallout in the next issue of the Flash…

Carmine Di Giandomenico’s art is amazing. If there is any problems in his art, it’s his faces are too similar (although, if you look at his older work, it’s improved tremendously) and his backgrounds are a bit too blurred. I know a lot of that was intentional to give the feeling of movement, but if was a bit too much for me. It just felt like my eyes weren’t adjusting like they were supposed to. His action is amazing, and his designs looked great. When Carmine is done with Flash, I wouldn’t mind him jumping over to a Batman title (hint, hint).  Ivan Plascencia’s colors really do the heavy lifting here. The vibrancy comes off of every page, and pulls you into the Speed Force itself. He really gives things another-worldly feel here. The way he colors light, is really cool, and that’s a good thing considering he colors Flash. Tom Napolitano letters here and does a solid job with his placement. However I had trouble reading the Batman Who Laughs’ dialogue boxes because of the coloring of them. It’s a bright red lettering with a dark red that fades into black as it goes down. If it was solid black, with bright red lettering, it’d be much easier to read. I had to strain a few times to read the first few words, but then again, maybe I should have worn my glasses.

Final Thoughts: An interesting world, and one I wanted more time to develop. Without that time, it leaves you a bit more shocked, which makes things difficult for you to process.