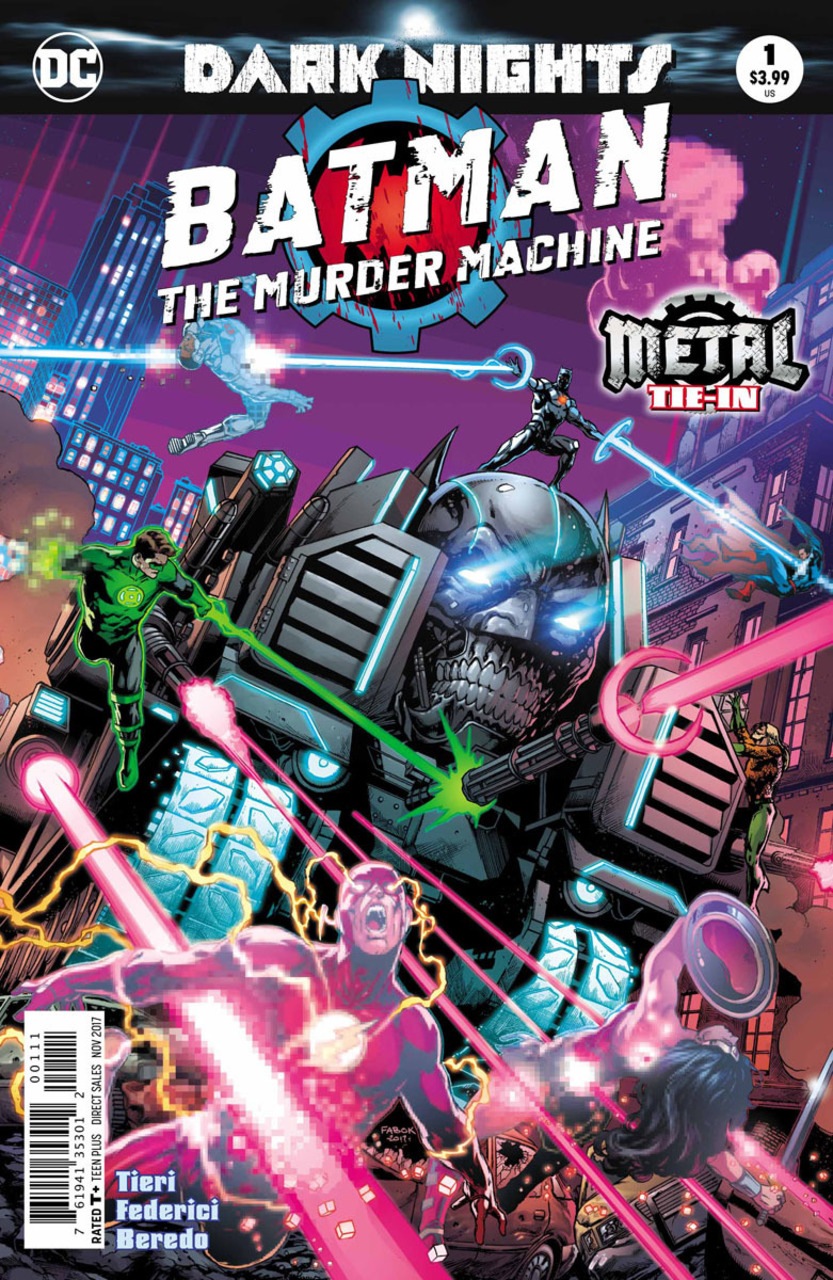 Overview: While in mourning, Bruce makes a decision that not only changes his life but also the life of the people around him. Alfred might be of help.

Synopsis (spoilers ahead):  The issue opens with Cyborg talking with his father, telling him he should get out of S.T.A.R. Labs. Cyborg is in the Watchtower, standing guard and keeping watch on the home cities of the members of the League. Cities are falling, Gotham was the first, Central City came next. Cyborg is worried Detroit might be a target. His father’s computer pings, indicating an attempt at hacking the lab system. He dismisses it as “probably some punk M.I.T. student”. Their conversation is interrupted. Batman teleports into the Watchtower, but it is the wrong Batman.

The story of how the Murder Machine came to be is then told. He was the Batman of Earth -44. In his world, Killer Croc, Harley Quinn, Clayface, Two-Face, and Bane invade the Batcave and interrogate Alfred. He won’t give them any information, and after a severe beating, Bane breaks his back.

On the day of Alfred’s funeral, Bruce is down in the Batcave rewatching the footage of his death over and over again. He blames himself. The League goes to him, tries to extricate him from the cave, stop him from watching it again. They fail. Damian, Dick, Barbara, Tim, and Gordon are shown attending the ceremony.

Bruce stops Cyborg on his way out. Years back, Bruce had scanned Alfred’s mind and created an artificial intelligence mimicking the butler, but he never finished it. The Alfred Protocol. He needs Cyborg to help him finish it, to help him bring his father back to life.

Back in the regular timeline, Cyborg is down and the Murder Machine opens a channel to his father so that he could hear them fighting. Dr. Stone, Cyborg’s father, offers him help, says he could give him anything for him not to hurt his son. The communication is cut, but after hearing his father Cyborg stands up and fights back. The Alfred AI gets summoned.

One month prior, back in Earth -44, a horde of Alfreds is surrounding Bane, chanting “How may I help you?”. They kill him. They kill every single inmate in Arkham. The AI had mutated into a virus, Bruce tells Cyborg, and started spreading, doing everything it could to protect Bruce. Cyborg suggests they deactivate the program, Bruce wants to try to reprogram it. He refuses to destroy what is left of his father. Cyborg promises to find a way to control it and leaves Bruce with a warning not to let it in.

Meanwhile, in the Watchtower, the Murder Machine tells Cyborg the best thing he did was letting Alfred in. It fixed him, took away his ability to fear and feel, both emotionally and physically, transforming his flesh into machinery. Cyborg has been dodging the attempts at hacking the Watchtower and believes he’s hindering the Murder Machine, when in fact it was using the Watchtower systems to access S.T.A.R. Labs. Cyborg’s father is endangered and Detroit falls, taken by Alfred’s AI robots.

After Earth -44 Batman got taken by the AI virus, Cyborg gathered the League to try to stop him. He appealed to Batman’s humanity. After killing all of the League, Batman, now turned Murder Machine, decapitated the Cyborg of his Earth. Shortly after that, he learned his universe was destined to collapse into nothingness. The Batman Who Laughs recruited him.

In the Watchtower, all of the Dark Knights appear, taking down Cyborg as he father listens, tirelessly offering to help his son. Cyborg is out and Dr. Stone taken for future purposes. The Batman Who Laughs comes into the scene, revealing that the metal inside Cyborg could have caused them trouble had he known how to wield it. He tells Cyborg that, though they might seem like “monsters of nightmare” – which, in fact, they are -, they could only come to be because this world was capable of dreaming them into existence. They heard the ringing, the call for help, and they came.

The Watchtower is taken.

Analysis: Close your eyes. Imagine yourself standing on a ledge, no railing to stop your fall should you lose your balance. There is a security belt around your waist, your rational mind knows that. Your guts don’t. The feeling of danger, the dread to fall to your death is real, despite you knowing that it won’t happen.

This is not a canonical Batman, this is a Batman from another universe. This is not the fate of the regular Bruce Wayne. It is as close to an Elseworlds story happening inside canon as it gets. I went into this issue with that security belt around my mind. I felt my guts being punched the same, the circumstances being plausible enough for my brain to interpret it as a real possibility for the character.

Anyone who is familiar with the Batman mythos knows Bruce is terrible dealing with death. His mourning process is always harmful, self-damaging, obsessive. He became Batman for it. Tim Drake came into his life because he went on a rampage after Jason died. On his rage, he almost killed Lex Luthor for thinking he murdered Dick. He watched the tape of Damian’s death over and over, trying to change the outcome. Damn, he went to Apokolips, as close to hell as you can get in DC canon, to get Damian back.

Anyone who is a little more familiar with his history knows that this is not the first time Batman has made a ridiculous contingency plan that involves uploading someone’s conscience into a machine. He has done it with himself more than once, the most recent being his return to the cape and cowl by the end of the New 52.  It is not a far shot to imagine he would do the same with Alfred. This Batman who tortures himself with Alfred dying at the hands of his villains – much in the same way he himself was once broken – is believable. He is real, yet he is not. He is painfully on-character for me not to feel deep in my heart his hurt. This is an issue as powerful as Peter Tomasi’s silent issue after Damian died. This is Bruce Wayne mourning his father once more. Just as he transformed into Batman when his first father died, he now transforms into a Murder Machine after his second father dies.

I was reading it and feeling my stomach sink with sadness and dread of how terrible things went for this boy, this boy who believes himself a man but cannot find his own ties for his life without his father. Riccardo Federici’s art was not helping me on that field. He took my already aching mind and gave a little further squeeze by being the master he is. The amount of pain that can be read on Bruce’s face as he asks Victor to please help him get his dad back. He looks like a child, he looks beaten and lost, and I could have read that even without captions.

And while Alfred’s AI makes Bruce become a murderer, he is only there to help. It is strangely in character, to have this protector of the Wayne legacy, this man who will give himself day after day to taking care of his boys, his crazy boys who go out at night with no insurance of their return. Of course Alfred, the eternal helper and holder of the Waynes, would do everything in his power to protect his son, to take the pain away from him, to heal him. It just happens that Bruce’s humanity went away with his pain.

On the other end of the spectrum, while this issue made my sympathize deeply with this Batman, he is also brutal. A Murder Machine indeed. Some scenes are extremely graphic and uncomfortable, Federici’s realism once again making it all worse – and believe me, when he makes it worse, he makes it absolutely great. Batman ripping Cyborg’s head off is an image that will stay in my head for quite a while. The one tiny little problem I had with this issue was the lettering. The layouts were fine, but the style did not go so well with the art. The lines of the balloons are a bit too heavy with the softness of Federici’s outlines and Rain Beredo’s colors. I believe DC makes the letterers use the same style of balloon for each character when an event is at play, but the background used for Murder Machine is a bit aggressive to the art. In fact, I am not a big fan of gradient effects on balloons, it makes them harder to read.

And talking about the art, the intricate details put into the machinery design is absolutely stunning, but what made the Murder Machine even more macabre was how organic and yet inhuman it is. Cyborg is all machine except for his face. We look into a human face, we see the expression in his eyes, we are able to sympathize with him immediately. Batman has always been a little unnerving because of the white eyes. Now, his mouth has become machine. His spine has become machine. He has become machine. And yet, we can see all of his muscles. And yet, he extends tentacles out of his hand. He is both less living being and more organic than Cyborg.

Final Thoughts: With a well-developed concept, believable backstory and faultless execution, Batman: Murder Machine is a striking comic. Frank Tieri and James Tynion IV gave a little twist to the Batman mythos and yet kept true to their core, making it even more unnerving than simply distorting Batman into an evil version. Stunning, gut-wrenching art gives us the visual to yet another Batman mourning story, one which will surely leave its mark in the history of the Caped Crusader.