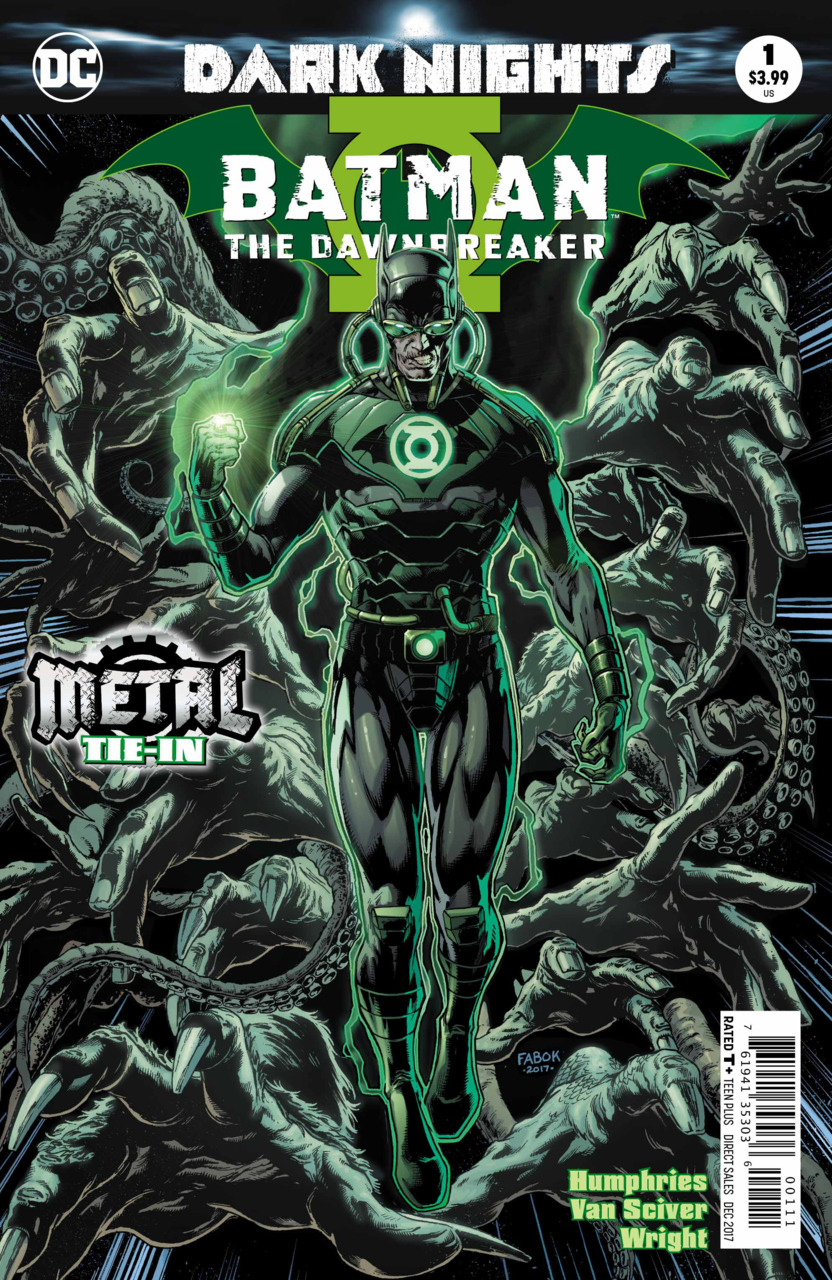 Overview: Presented with a Power Ring at the moment of his parents’ death, young Bruce Wayne gets corrupted by its power and uses it to hunt down criminals in Gotham.

Synopsis (spoilers ahead): This story starts as every other Batman story: Thomas and Martha Wayne are gunned down in Crime Alley. Instead of training himself to become Batman, this Bruce gets a Green Lantern Power Ring moments after the murder of his parents. Taken by feelings of vengeance, he uses the ring to take the life of the murderer. In order to use lethal force, Bruce corrupts the power of the ring.

He then tries to bring his parents back to life, but they are only animated bodies with no soul. As Green Lantern, he sets out to fight crime in Gotham. His use of lethal force and brutality makes the police question his means. After Bullock disappears, Gordon questions Bruce about his actions. Bruce kills him for being impertinent.

The Green Lantern Corps comes after him for his inadequate use of the ring, but he defeats them all with his Blackout function of the ring. After this confrontation, Bruce steps into the Central Power Battery of the Green Lanterns and comes out of it as the Dawnbreaker, wearing his bat-lantern uniform.

After his universe gets destroyed for unknown reasons, the Batman Who Laughs recruits. They are set to take “a world bathed in light” under the command of Barbatos.

We are then taken to Earth-0 in the present as Dawnbreaker descends upon Coast City, Hal Jordan’s hometown. Hal mistakes the Dawnbreaker for Batman and gets caught off guard. He gets attacked by the dark constructs of the Blackout. Hal’s ring won’t respond to his orders and he is taken by the darkness, only to be saved by Dr. Fate, who takes him elsewhere.

Analysis: From all of the Dark Knights, Dawnbreaker presented the most challenging premise. How do you come up with a story in which the exact same tragedy that created Batman creates a psychotic murderer? The answer given seems to be that the power of the ring corrupted young Bruce.

At his moment of extreme grief and suffering, Bruce is presented with a Power Ring. He uses this power to avenge his parents, killing Joe Chill (I’m assuming it is Chill, his name is not mentioned). In doing so, he corrupts the ring. It is only after corrupting it by killing Chill that he tries to bring his parents back to life, which feels like an inversion of Bruce’s typical priorities. The problem here is the use of the “absolute power corrupts absolutely” stratagem with Bruce Wayne. You see, this is a kid born into power, ring notwithstanding. He was born with a silver spoon, his family pretty much owns Gotham. If he were corruptible by power, then the regular Batman would also have been corrupted.

It is understandable that a kid who just saw his parents die would be taken by feelings of vengeance – which he gets – and a desire to revive his parents – which he tries. The problem is, we only get two panels of zombie, lifeless Martha and Thomas, while Bruce killing Joe Chill takes two full pages and another panel. And then he kills all of the criminals in the most brutal way possible. And then he kills Gordon for questioning his actions. The whole “absolute power corrupts absolutely” coupled with the constant violent imagery makes his feelings become secondary. It is only when he steps into the Power Battery that we are remembered that this is a boy in grief. Ethan Van Sciver’s art, while adding a whole lot of atmosphere with his detailed backgrounds and design, contributed to dull down some of the impact of the story. In no panel did Bruce look like a kid, even at his parents’ death scene. He looks too much like an adult, so it is hard for the reader to grasp that those might be actions steaming from childish impulsiveness and immaturity.

The most notable element of this story was the creation of the Blackout. It was a way of making a Green Lantern Ring function a bit on the realms of a Black Ring. Dawnbreaker’s ring will engulf its surroundings in darkness and project nightmarish skeletons and monsters that surround his targets. Hal Jordan’s ring cannot identify these constructs and therefore cannot act on them. The whole Coast City sequence, culminating with Hal entering darkness and then being rescued by Dr. Fate, is the very best part of this issue, both graphically and plot-wise. Final Thoughts: The story is based on interesting key points, but fails to fully convey the Dawnbreaker’s motivations, making him a one-dimensional character.