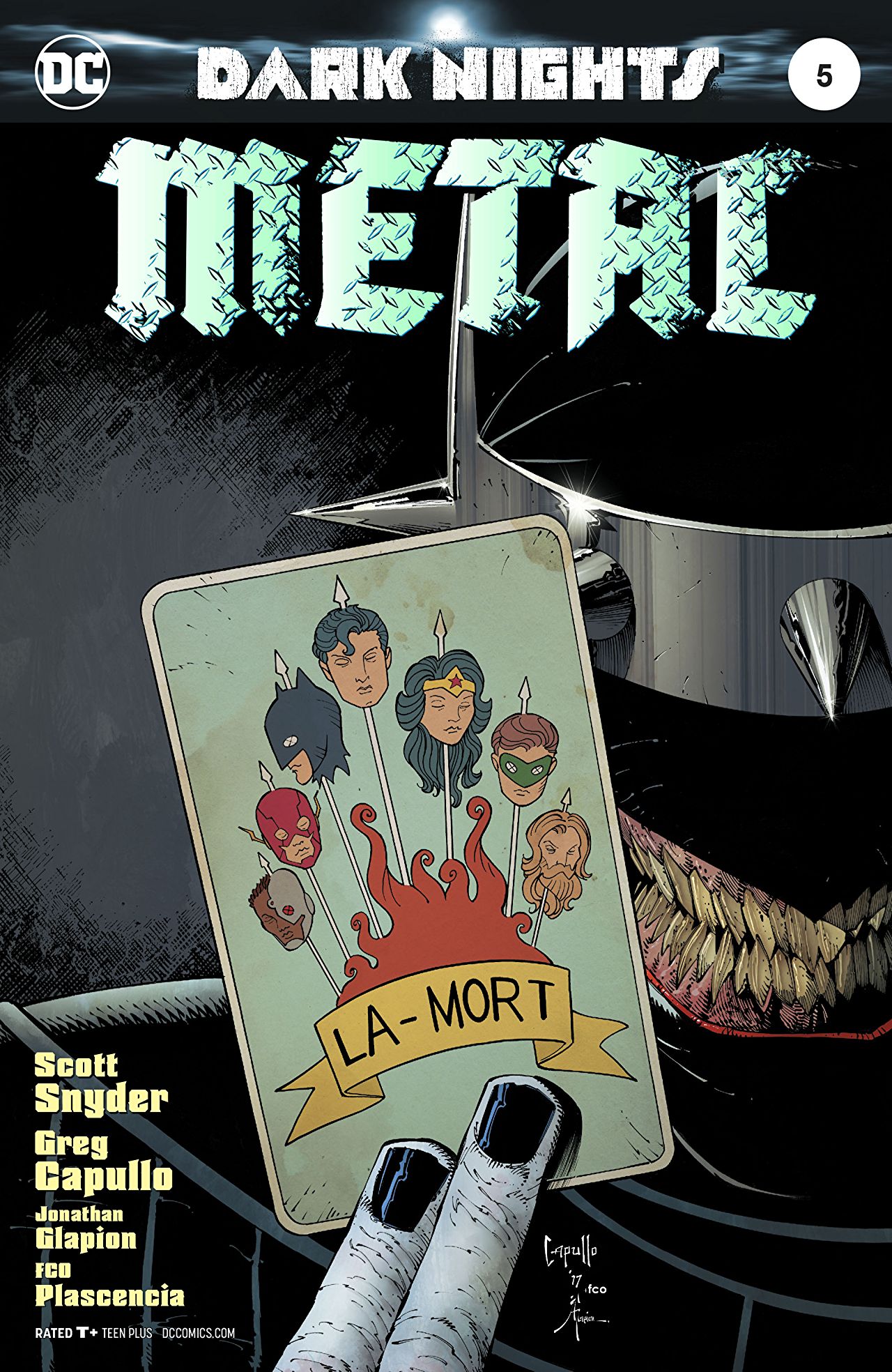 Overview: Batman and Superman are placed in Hawkman’s giant smelter, while Diana is shot in the head, then Truth-punches Hawkgirl in the face, as Barbatos turns out the lights.

Synopsis (spoilers ahead): Perched atop his spire in the middle of Gotham City is Barbatos. His Joker-Dragons fly around him. He looks down at his most trusted acolyte, the One Who Laughs, and asks him if it is time. The One Who Laughs tells him yes, and that every beginning begins with a great noise, so to bring on their new world they need him to wail out. Barbatos opens his mouth and sounds the alarm.

At the Forge of Worlds, an aged Batman tries to call out for Carter Hall, but he isn’t answering. In his place is Barbatos’s new Great Dragon. He begins to search for any light left in the metal inside the forge, but Clark has lost hope and begs for Bruce to retreat with him. However, Bruce doesn’t give up, but instead tired out after a while in his old age. He talks about Hawkman to the Great Dragon, and some doubt seems to creep up in the creature as he tells them that Carter Hall is dead. This memory seems to trigger a spark of light inside the forge.

Arthur and Slade reach the center of the Earth and find that the core is encased in some form of Atlantean technology mixed among others. They power up the machine, but both are pierced by a spear thrown by Black Manta. He’s made a deal with Barbatos. He will rule the seven seas, while all Atlanteans are enslaved by him. A few of the Dark Knights are there to help him.

Mister Terrific and Green Lantern are stuck in a jail cell on Thanagar Prime. Hal tries to make a lock pick construct, but can’t put a thought together any time he attempts to use his ring. Luckily, Martian Manhunter has been undercover on Thanagar, and let’s them out of the cell. Manhunter is able to block the effect Starro put on Hal, and they go to retrieve Plastic Man. Thanks to Manhunter, they are able to overtake Synn and his guards. They retrieve the Plastic Egg and are going to use it to power the Phoenix Cannon and raise the Earth out of the darkness. However, Terrific sees that the cannon has been reversed. It’s going to cause the Earth to sink even further. It’s been done by more Dark Knights, and they are there to finish the job.

Wonder Woman fights off Black Adam, asking why he would betray them. He tells them that Barbatos offered to make Kahndaq a world power in his new world. Black Adam can’t pass up that opportunity, and he blast Wonder Woman through a wall. Inside there, Diana finds Hawkman’s mace. Black Adam is about to call out SHAZAM!, but Diana uses the Nth metal mace to conduct the energy, store it, and smashes him in the face with it. However, Diana is shot in the head by the One Who Laughs with an eighth metal bullet – the same type of metal used for the invisible jet (Don’t worry, it doesn’t kill her. She is a god after all.). He mocks her. Tells her of the different times he’s seen her on various other worlds. Sometimes they fought one another. Other times together. On some, they were even together. But she always fought until the end. No matter what.

The Phoenix Cannon fires and strikes the Earth’s core. The One Who Laughs then puts Hawkman’s mace into the portal, guiding the Earth into complete Darkness. Batman and Superman take a leap of faith into the spark of light in the forge. The One Who Laughs places Diana’s crown back on her head and leaves her to fight all alone. She rushes toward Kendra and punches her in the face using the Lasso of Truth, and this breaks the hold Barbatos had on her. Diana picks up the mace, and she and Kendra go through the portal. They find themselves surrounded by nightmare versions of heroes and villains. Diana tells Kendra to let out a battle cry for Barbatos to hear. Batman and Superman drown in the molten metals. And Dream’s library burns…

Analysis: The pacing in this issue was very fast paced. Like the drumbeat to a Slipknot song, it just repeatedly punches you in the face. Snyder does a good job of bouncing around and keeping us engaged with every scene that’s happening. I’m actually quite looking forward to The Terrifics (partly because of this book and partly because of Lemire and Reis). I’m anxious to see how this event is going to end with just one issue left. It looks as though it’s going to be a bit bigger in terms of page count, but I just have no idea how things are going to end and I love it. The One Who Laughs is throwing me for a bit. I feel like he’s playing everyone, but he hasn’t shown his cards yet. He’s like the Darth Vader to Barbatos’ Palpatine, except there’s no way this guy can be redeemed. He seems to bounce from scene to scene without much effort. Like he’s literally jumping page to page when he feels like he needs to be there. It’s very meta. Like a cross between Dream and Deadpool, but without breaking the fourth wall. I don’t trust the guy (looks suspiciously…).

Greg Capullo does a great job here, as always. His attention to detail really impressed me. Look at the scene with Wonder Woman and Black Adam; his lightning powers are being conducted by Diana’s metal gauntlets. I just thought that was really cool. The guy knows how to set a scene. I don’t know how he keeps everything so consistent, even with his constant changing of the camera angle. Stuff like that just blows me away.

Jonathan Glapion does a solid job here. He did loose a bit of detail towards the end with all of the Nightmare characters. I can’t get mad at he guy, because that would be SO much work, but it was laid out to be a spectacle, and then it wasn’t shown off to it’s true potential. Hopefully the guy was just on a tight schedule and can go back and touch some of that up for the trade. FCO Plascencia kills with his colors. I don’t know anyone who can set up a scene the way he can. The vibrancy in his colors are stunning, and the story can easily transition without you being told and you can still keep up from the colors alone. That’s some dang good storytelling from the colorist. Steve Wands letters, and does a solid job. His placement is spot on. I just still hate The One Who Laughs balloons and letter colors. It’s too freaking hard to read. Also, Barbatos letters were more difficult to read through this time, and I think it was because they weren’t as big as last time we saw them. It took me out of the story, and I had to struggle to read what was being said multiple times.

Final Thoughts: Everything ramps up as we hit the climax of the story. I’m definitely excited to see how this one ends.