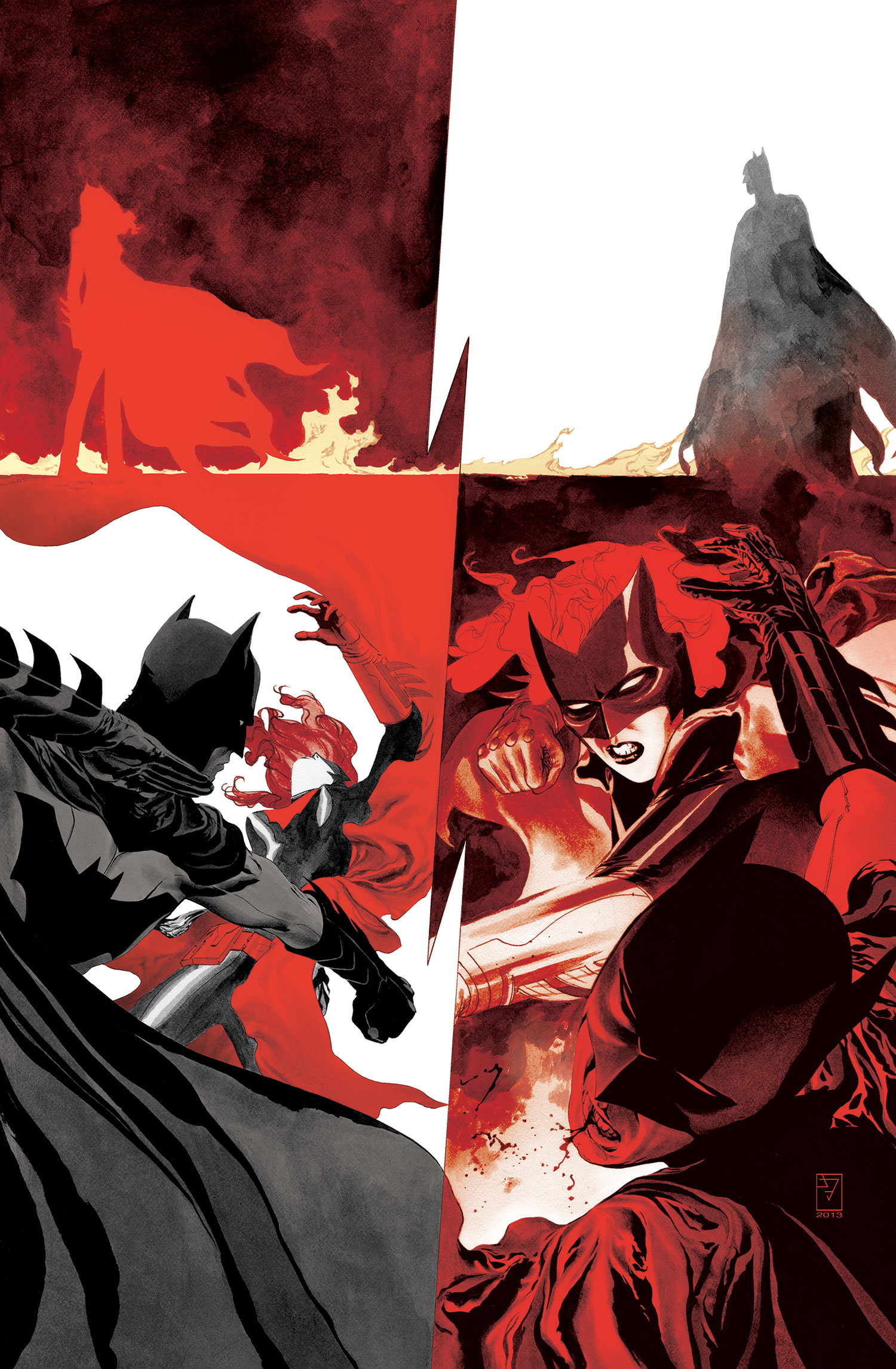 Going into Saturday's Baltimore Comic-Con, one the biggest pieces of speculation surrounding DC Comics' New 52 panel was how they were going to address the recent news that J.H. Williams III and W. Haden Blackman were leaving Batwoman because of editorial interference.  Specifically, they were leaving due to interference that led to storylines being changed and the nixing of the potential marriage of Kate Kane to her current girlfriend, Maggie Sawyer.

At the beginning of the panel, Dan DiDio spent three and a half minutes addressing the controversy, saying that DC was very proud to have a gay character carry a title and they're still proud of that character.  But they didn't want the marriage not because of any homophobia on their part but because in their minds, super-heroes should not have happy personal lives.  In fact, this seems to be the mandate for the entire Batman Family as well as the greater DCU.

Before DiDio made his little speech, I was planning on dropping Batwoman.  After?  I'm still dropping Batwoman.  Williams and Blackman's stories are what kept me on the title and the way it sounds that they were handled by editorial is enough for me to refuse to spend my money on the title after they leave.  I'm also not a fan of new writer Marc Andreyko (nothing against him personally, I just haven't enjoyed what I have read), so I don't think I'll miss the title when I'm gone.

But I'm honestly baffled by DiDio's comments that super-heroes can't have happy personal lives.  I realize that superheroing is not a job per se and is more of a calling that you dedicate your life to, but do they really have to be miserable?  Sure, a happy fulfilled Bruce Wayne doesn't make for an interesting Batman, but a happy fulfilled Dick Grayson or Kate Kane might.  To be honest, a mandate/edict of general personal unhappiness is, well, lazy.

I started reading comics as a kid.  When I was ten years old, I picked up Amazing Spider-Man Annual #21, which featured the wedding of Peter Parker and Mary-Jane Watson.  A few years later, I bought Superman (vol. 2) #50 in which Lois Lane accepted Clark Kent's wedding proposal.  I also read and came to love Crisis on Infinite Earths, one of the main characters of which is an aged Superman who has married his Lois Lane.  The idea that a super-hero could grow old and naturally evolve in his or her life was never foreign to me, even if some of those married versions were of alternate earths or elseworlds.  So if it wasn't a problem then, why is it a problem now?

Okay, I know the answer–it's not twenty years ago anymore and I'm no longer in the core demographic.  Married super-heroes do not make good for good synergy across media and licensing, especially when teenagers who download Superman Unchained or Batman or Trinity War may not have been aware of decades worth of stories and more than likely have been led to their local comics shops through Christian Bale and Henry Cavill than Michael Keaton and Christopher Reeve like I was.

No disrespect to the woman, but Kate Kane is currently not a marquee character in the way that the core members of the Justice League are.  So a marriage is not going to screw up any plans to align her portrayal with an animated series, toy line, or movie.  Her sexuality was part of her character and didn't seem like a gimmick, nor did her relationship with Maggie Sawyer, which developed over time and has not been without its fair share of complications.  Furthermore, Kate and Maggie's marriage might not necessarily make either of them happy.

Having Kate marry Maggie makes her a cop's wife.  Since Kate herself is a costumed crimefighter, Maggie becomes a "cop's wife" in a sense as well.  Combine this with the constant presence of the DEO and the fact that the DEO's mission doesn't always match up with the GCPD's and you have a formula for some serious tension, which is magnified by this marriage.  Williams and Blackman at the helm of a married Kate struggling with her role as Batwoman, her love for Maggie, and her dedication to her crusade would have give us an adult title in the true sense of the word, one that we haven't seen from DC in quite a while.  Alas, we will be left with misery, big fights, bigger deaths, and a retread of tired tropes that make me want to take my money elsewhere.