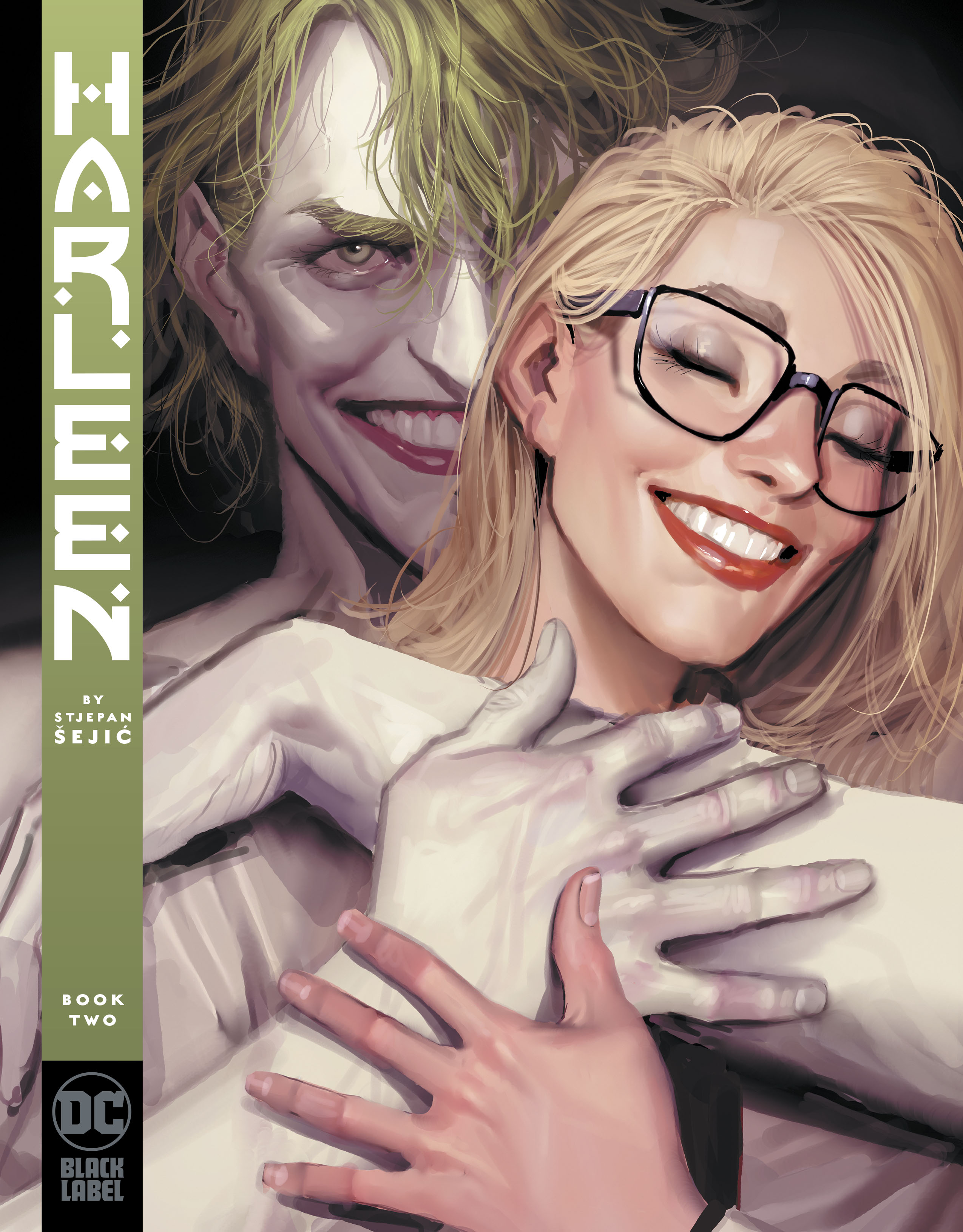 Overview: Joker begins to sink his claws into Harleen, as Harvey Dent’s face is destroyed by acid, and things heat up in Gotham City.

Synopsis (spoilers ahead): Harleen is continuing her interviews with Joker, trying to ascertain how and why he became the monster he is, but she feels he is feeding her lines to fit her hypothesis. Meanwhile, Gotham is turning into hell as Harvey Dent’s face is destroyed by acid on live TV by a criminal he is prosecuting, and cops turned vigilantes kill the criminal, only to then, in turn, be apprehended by Batman. Joker’s words in the interview that Gotham is filled with people barely containing suppressed rage start to haunt Harleen’s dreams.

She then goes to the Gotham Police Department for an appointment with Commissioner Gordon as she wants to begin interviewing the police officers to test her theories but Gordon warns her the whole department – including him – is on edge, as suspicion is focused like a laser on the police following the Executioners announcing they were police officers. Harleen watches one of the cops Batman apprehended ranting behind glass an remarks to Gordon it’s not the first time she’s seen this. She tells Gordon she needs to ask Batman something, and he allows her to wait throughout the day, before Batman arrives at the call of the bat-signal.

Harleen asks her question to Bats, which is, does he think they can be helped? He responds that the reasons he doesn’t kill the super-villains, the Jokers and the Killer Crocs, is because he doesn’t want to give up on them, or himself. He hopes there is hope for them. Noticeably Harleen is already struggling to call the Joker, “Joker”, and not “Mister Jay”.

Back at Arkham she takes another run at an interview with Joker. He immediately shortens her name to Quinn, which she allows. Joker than talks about Batman’s role in Gotham according to him. He also says that Batman will one day cross the line himself, and become a monster too. He also lays some charm on Harleen, giving her vivid bad dreams, while behind her back Joker has gotten access to her reports.

Harleen is starting to disintegrate mentally as the effects of Joker’s charms and his insidious mind games work their spell on her. Ivy notices that Harleen’s hormones are elevated, curious to know if it was caused by her. She is sneaking into the maximum-security ward at night to watch Joker sleep. And it’s all down-hill from there…

Meanwhile, Harvey Dent awakens in a hospital, and he realizes the extent of the damage to his face, and quite possibly his mind. At a press conference he goes crazy and then reveals to the world his face beneath the bandages, and rants about the monsters that infest Gotham, and how the Executioners were the only correct response.

Harley then goes to Joker with the one question she notices nobody has asked – does he feel remorse for the lives he’s taken? He responds but the answer only drags her further into his web, switching the perspective of the doctor-patient relationship. She then releases Joker from his restraints and playing a game of her own, confesses she cares for him, and allows Joker to call her Harley.

Analysis: This is a fantastic compelling read. Taking as it’s central conceit the concept of monsters in Gotham and what makes them, we are introduced to a new and exciting perspective in Harleen and the slow descent to fall under Joker’s control – the seduction is slow, creepy and fascinating. He draws on her flaws as much as his own. Meanwhile the city itself proves itself to only be a small step away from chaos itself – Harvey Dent, the slick district attorney is scarred physically and mentally, turning into a raving lunatic in front of the television cameras, exposing the city for how he truly sees it – filled with criminals for whom death should be the punishment, for there is no cure.

Harleen meanwhile is a fascinating character study throughout the issue – falling into the Joker’s web, but with a reluctance to fall too quickly or too deeply – she has agency but her choices are flawed, and she gambles with her professional detachment and her sanity. We see in one scene the Harley she becomes – smashing in a cop’s brains with a baseball bat, but for the remainder of the comic, she is still Harleen, until right at the end, when Joker calls her Harley and she allows it. In a lot of ways, it’s hard to see how this comic could have been done any better and I’m tempted to give it a perfect score. Stjepan Sejic delivers on art and story – there’s an unsettling creepiness to the dreams that Harleen is having, and there’s a general feeling of a monster playing nice as Joker lays the moves on Harleen, not content until he has fully wormed his way into her head. Like the security guard, we as the reader see the trap Harley is making for herself, and that Joker will be the one to spring it. You know what, I am giving this a perfect score. It’s magnificent and I can’t wait for the next issue!

Final Thoughts: An excellent, compelling tale which uses its extra pages to great effect – a triumph of storytelling. This is a must get for Harley and Joker fans.