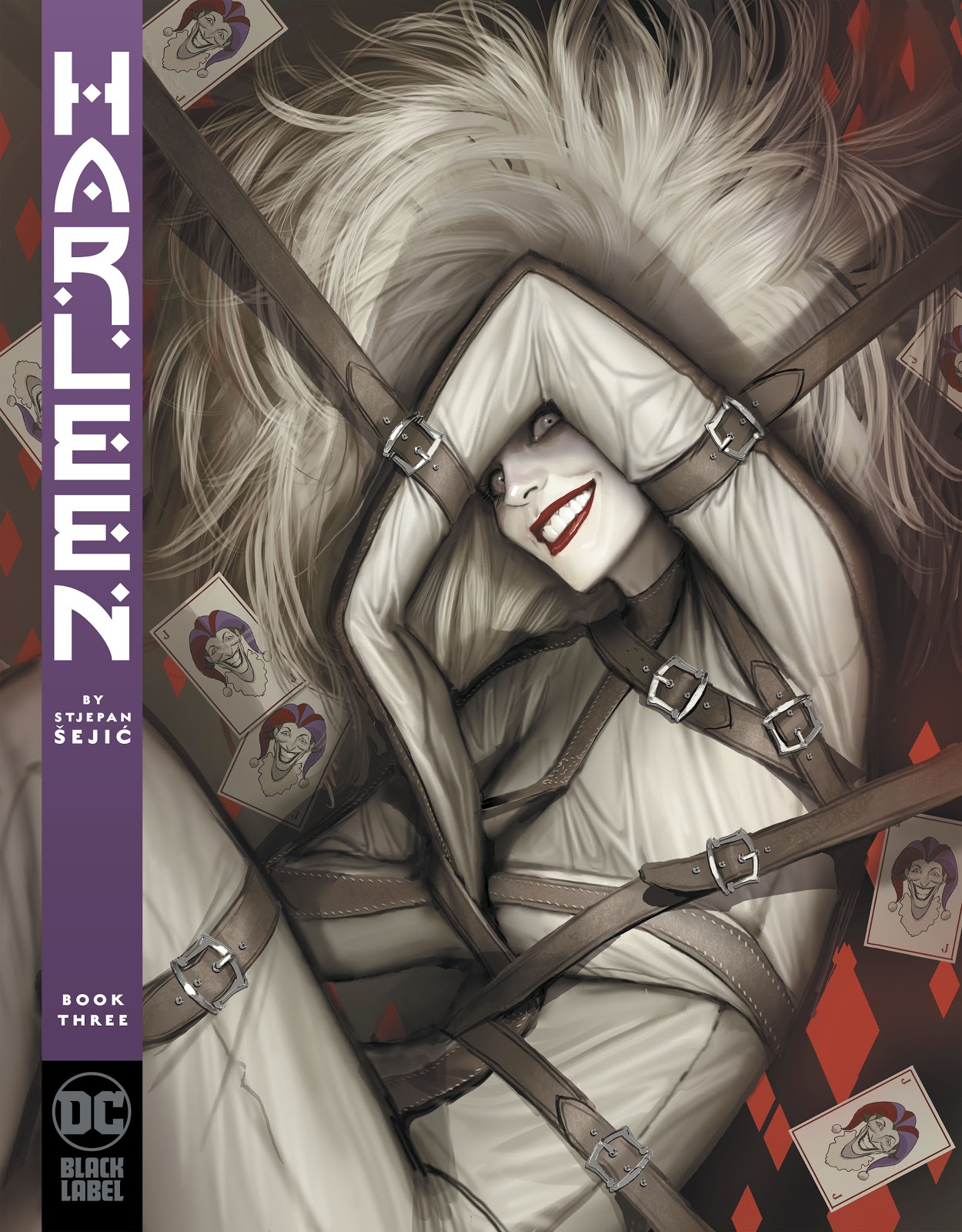 Overview: As Harleen gets closer to Joker, an encounter with Harvey Dent will push her further into Joker’s circle of madness.

Synopsis (spoilers ahead): Dr. Harleen Quinzel is harboring vivid dreams of her patient, the Joker, as she begins to fall almost literally under his spell. Against her better judgment, she is covering the camera during her sessions with the Joker, which are now taking on a physical dimension as they openly flirt with each other during the sessions.

Meanwhile, across town, Harvey Dent is trying to recuperate from his wounds, but he is haunted by hallucinations and his sanity is definitely in the balance. A group of disaffected police officers come to Harvey requesting he work with them – they are the Executioners, who murdered Maroni, following his savage attack on Harvey. He flips his coin, his sanity slipping into the bizarre Two-Face routine, and decides he’s in. Harvey declares that they will stage a breakout at Blackgate Prison, forcing the politicians to act, and implement the death penalty!

In their sessions, with Harleen touching Joker’s arm (he no longer wears his restraints in their sessions) he explains what it was like falling in the chemicals, explaining his body is numb, and to feel anything the touch has to be intense. Harleen thinks Joker is opening up to her, but she also is getting sexually attracted to him and is dreaming of him. Batman comes to interrogate Joker over a matter, and Harleen angrily sends him away. Caught up in her emotions, Harleen dresses for a date and then goes to the Joker’s room and has impulsive sex with him! She dreams afterward of saving the city of monsters with him.

Meanwhile, Harvey Dent and the Executioners liberate the denizens of Arkham, starting with Poison Ivy, then Joker! Harleen rushes into the building and is almost eaten by Killer Croc before Ivy saves her. Harleen then runs into Harvey Dent, now fully psychotic, and tries to talk him out of shooting her. Harvey reveals a backstory with the Joker, revealing how he has lost faith in a system that is not able to kill the Joker, only imprison him, so he can escape and kill more victims. He wants the Sword of Justice to be swung.

Harvey is determined to kill Harleen, even prepared to cheat his coin system, but then Joker appears, and hits Harvey with a brick to the face, only stopping when Harley begs him to. Mr. Bronson arrives and is prepared to shoot Joker, confused as to what has gone on. Harley grabs Harvey’s gun and in a moment of panic, shoots Mr. Bronson through the head. At that moment Harleen basically loses her last grip on sanity and becomes Harley, laughing manically with the Joker about how funny and absurd it all is. They fall into each other’s arms, and she declares if he can be the Joker, she can be his Harlequin.

In the Batcave, Bruce reviews the files and finds that the Joker has manipulated Harley, feeding back her own research into soundbites, and he feels responsible as he funded her work. Four years later, Harley in her full costume is lost in the Joker’s world, having taken too many tumbles and a lot of laughing gas. But there’s still one small last lucid piece of her, that thinks the night must end.

Analysis: This is an extremely interesting issue that takes the basic template of the Joker-Harley relationship, which we have known about since the days of Mad Love, and recasts it. There is still the same downward trajectory as Harley falls into Joker’s orbit, but I thought by giving the tone a more emotional, sexual flavor, the whole relationship did actually give Harleen a touch more agency than expected. It is definitely more interesting for probing into Harley’s own psyche, rather than being obsessed with the poking the Joker’s psychosis. Joker for all intents and purposes in this story is Joker. The story brings nothing particularly new to his interpretation but it is Harley’s reaction and role in their relationship which is fascinating.

Reviewing the matter at the end Batman is very analytical, stating that Joker just fed Harley’s research back to her, the master manipulator, but in the context of the story, Harley seemed more driven by desire than a victim of simple manipulation. She was conscious of the craziness of her actions, of letting the Joker in, but then again, he aroused her, and she was very consciously trying to “save him”, and save the city of the monsters – it’s a complicated ball of thread and at times the reasoning is murky but none of this invalidates a good book. At least it’s trying another angle with the character that is a world away from the normal “wacky Harley” tales (which I eat up and love) – there are moments that show her concern for others such as Ivy, and point to a larger story than just Harley as the victim.

He did a great job with the story but Stjepan Sejic’s art is still wonderful in this oversized book, every page a delight. The foreshadowing of Harley’s eventual costume and color scheme is wonderfully done, and even the end, in the Batcave with its tones of grey speaks to the comparative moral neutrality that this book occupies. It’s a book of moods, of emotions, of complicated people in a complicated city. Not even Batman and Alfred can really crack it at the end. Harleen is a fantastic series and any Harley fan owes it to themselves to put it on the shelf for Christmas. Highly recommended.

Final Thoughts: A thought-provoking and extremely solid issue, this was an intriguing and somewhat different spin on the inception of the Harley-Joker relationship.