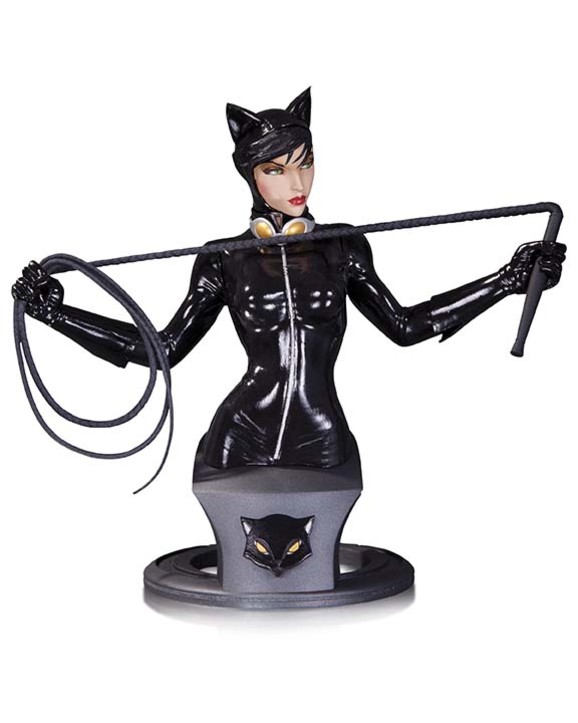 DC has released collectibles solicitations for August 2015.  Items that might be of interest to TBU fans include the next in the line of 6″ action figures based on Batman: The Animated Series, a new 6.75″ action figure of Batman from the DC Comics Designer Action Figure Series based on the art of Jae Lee, two Batman: Black and White statues of Batman based on the art of Bryan Hitch and Darwyn Cooke, a Batman: Black and White statue of Batgirl based on art by Babs Tarr, a DC Comics Super Heroes Bust of Catwoman, and a collectible police badge based on those used by the GCPD in the television show Gotham.

BATMAN ANIMATED SERIES: ROXY ROCKET DELUXE ACTION FIGURE
The fan-favorite line of 6″ action figures from the Emmy Award-winning animated series continues with Roxy Rocket! For the first time ever you can own Roxy and her famed rocket in this deluxe figure pack.
Figure comes with show specific accessories, display base and rocket with working lights!
THE NEW BATMAN ADVENTURES: ROXY ROCKET – 5.5″
ROCKET MEASURES 12.25″ LONG
$39.95 US • On Sale August 2015 * Allocations May Occur

BATMAN: BLACK AND WHITE BATMAN BY BRYAN HITCH STATUE
DESIGNED BY BRYAN HITCH
SCULPTED BY CLAYBURN MOORE
Designed by acclaimed artist Bryan Hitch comes the latest statue to add to your collection. Don’t miss your chance to pick up this statue capturing Batman launching into action!
Limited Edition of 5,200
Measures Approximately 6.25″ Tall
$79.95 US • On Sale August 2015 • Allocations May Occur

BATMAN: BLACK AND WHITE BATGIRL BY BABS TARR STATUE
BASED ON THE DESIGNS OF CAMERON STEWART AND BABS TARR
SCULPTED BY IRENE MATAR
Barbara Gordon gets the Black and White treatment based on her fresh new look from the hit comic book BATGIRL.
Limited Edition of 5,200
Measures Approximately 7.25″ Tall
$79.95 US • On Sale August 2015
Allocations May Occur

GOTHAM CITY POLICE BADGE
Don’t miss your chance to own your very own Gotham City Police Badge as seen on the hit TV series GOTHAM. This chrome-plated metal badge is molded from the actual show prop and comes attached to its own leather belt strap.
Measures Approximately 3.5″ Tall
$29.95 US • On Sale May 2015 • Allocations May Occur

BATMAN: BLACK AND WHITE BATMAN BY DARWYN COOKE SECOND EDITION STATUE
DESIGNED BY DARWYN COOKE
SCULPTED BY JONATHAN MATTHEWS
This highly popular Batman: Black and White statue by famed artist Darwyn Cooke is back with the all new second edition paint deco. Don’t miss your second chance to pick this one up!
Measures Approximately 7.25″ Tall
$79.95 US • On Sale July 2015 * Allocations May Occur