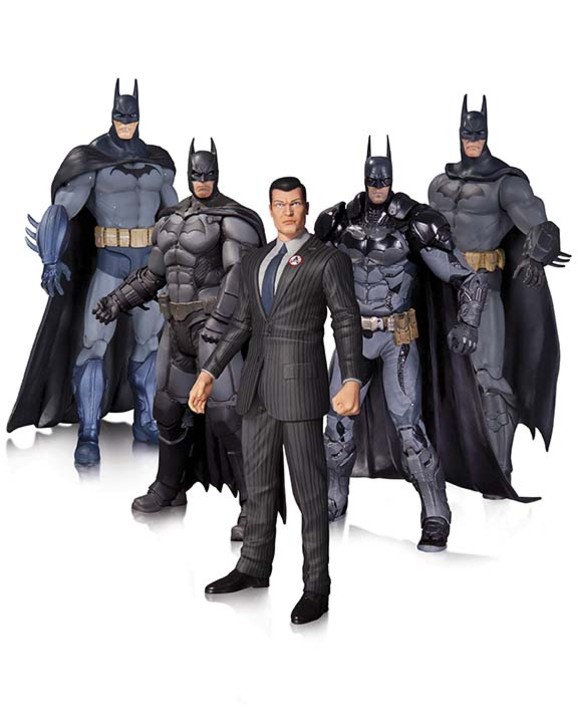 DC has released collectibles solicitations for August 2015.  Items that might be of interest to TBU fans include a five-pack of new action figures based on the Batman:  Arkham video games for $84.95, a $124.95 statue of Batwoman which is the newest selection from DC Comics’s Bombshell series which are inspired by pinups from the 1940s and 1950s, and two new Batman: Black and White statues one based on the art of Lee Bermejo and one based on the art of Greg Capullo both for $79.95.

DC COMICS BOMBSHELLS BATWOMAN STATUE
DESIGNED BY ANT LUCIA
SCULPTED BY TIM MILLER
Gotham City’s female Dark Knight stars in the newest addition to the line of gorgeous statues inspired by the pinup girls of the 1940s and 1950s designed by Ant Lucia.
Limited Edition of 5,200
Measures Approximately 10.5″ Tall
$124.95 US • On Sale September 2015 • Allocations May Occur

BATMAN: BLACK AND WHITE BATMAN BY LEE BERMEJO SECOND EDITION STATUE
BASED ON THE ARTWORK OF LEE BERMEJO
SCULPTED BY JEAN ST. JEAN
Measures Approximately 6.5″ Tall
$79.95 US • On Sale September2015 * Allocations May Occur

BATMAN: BLACK AND WHITE BATMAN BY GREG CAPULLO SECOND EDITION STATUE
BASED ON THE ARTWORK OF GREG CAPULLO
SCULPTED BY JONATHAN MATTHEWS
Measures Approximately 5.75″ Tall
$79.95 US • On Sale September 2015 * Allocations May Occur