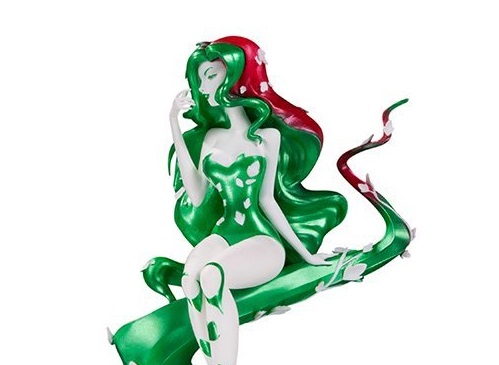 DC Collectibles’ Artist Alley line of statues is always a celebration of artists and their interpretations of various characters. Ahead of Toy Fair, DC has revealed via ComicBook.com some new black and white variants of the line that is sure to please Batman fans. First up is Christopher Uminga’s take on Batman, as well as Wonder Woman and Superman, all limited to 500 pieces. Uminga’s style is akin to a chibi style, with Batman especially looking more adorable than threatening. Next up are black and white versions of Hainanu “Nooligan” Saulque’s Batman, Joker, and Harley Quinn. One highlight to this collection is Batman who is wearing a pair of sneakers and gym socks. His style seems to include tall, thin, characters that wouldn’t look out of place in animation. Last but not least are pieces from Sho Murase that ditch the black and white theme (that the original statues contain) and instead go for a holiday theme. His Harley, Catwoman, and Poison Ivy are red and green, which proves how important color choices are in art. Perhaps because Poison Ivy is usually clad in green, her statue looks absolutely beautiful.

The statues will all retail for $40 and will follow a staggered release schedule with the Uminga statues in June, Nooligan’s in September, and Murase’s in November, just in time for Christmas.

Let us know which is your favorite.