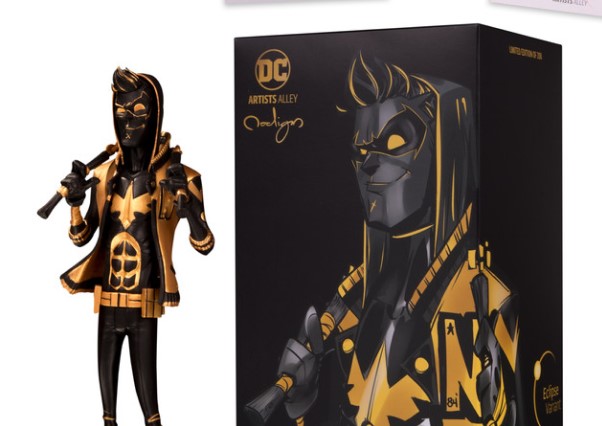 DC Collectibles will be setting up shop at DesignerCon 2018.  They will have a mix of new and older merchandise. Some of what they plan to bring includes one of their DC Artist Alley vinyl statues which allow artists to recreate characters in their own styles, as well as a limited edition Clutter Double Cast Batman Figure (which was also available earlier this year).  Of particular note will be their exclusive Nightwing statue designed by HaiNaNu “Nooligan” Saulque.  They will also be carrying some art prints and enamel pins. Take a look at the official announcement below.

DC Collectibles, DC’s in-house line of high-end collectibles, will make its DesignerCon debut, showcasing some of the company’s most cutting-edge collectibles at this year’s convention from November 16-18, 2018, in Anaheim, CA.

Taking center stage at the show is DC Collectibles’ artist-focused designer vinyl line, DC Artists Alley. DC Artists Alley is inspired by the popular “Artist Alley” convention experience and allows innovative artists to put their eccentric spin on DC’s most iconic characters. At DesignerCon, DC Collectibles will debut a DC Artists Alley convention exclusive variant of HaiNaNu “Nooligan” Saulque’s Nightwing figure. The design embodies Nooligan’s signature offbeat art style and features a “streetwear” makeover of Dick Grayson, complete with casual sneakers and a custom Nightwing varsity jacket. The standard version hits stores in December 2018, but a special-edition black-and-gold Eclipse variant will be available to purchase exclusively at the convention. The con exclusive is limited to 200 pieces and includes an original sketch of a Batman family character, hand-drawn by Nooligan.

DC Collectibles will also give fans an up-close look at upcoming DC Artists Alley figures from artists Joe Ledbetter and Chrissie Zullo. Ledbetter’s anthropomorphic spinon Batman, the Penguin, Catwoman and Robin will be on display in the DC Collectibles booth alongside Zullo’s whimsical transformations of Batgirl, Hawkgirl, Supergirl and Wonder Woman. Both sets of figures will hit stores in 2019, but fans attending the show can purchase custom art prints from each artist…and that’s not all. DC Collectibles will also debut additional DC Artists Alley figures from a surprise artist to be announced at the show…stay tuned!

Here is the complete list of items available to purchase at the DC Collectibles booth (#1500):