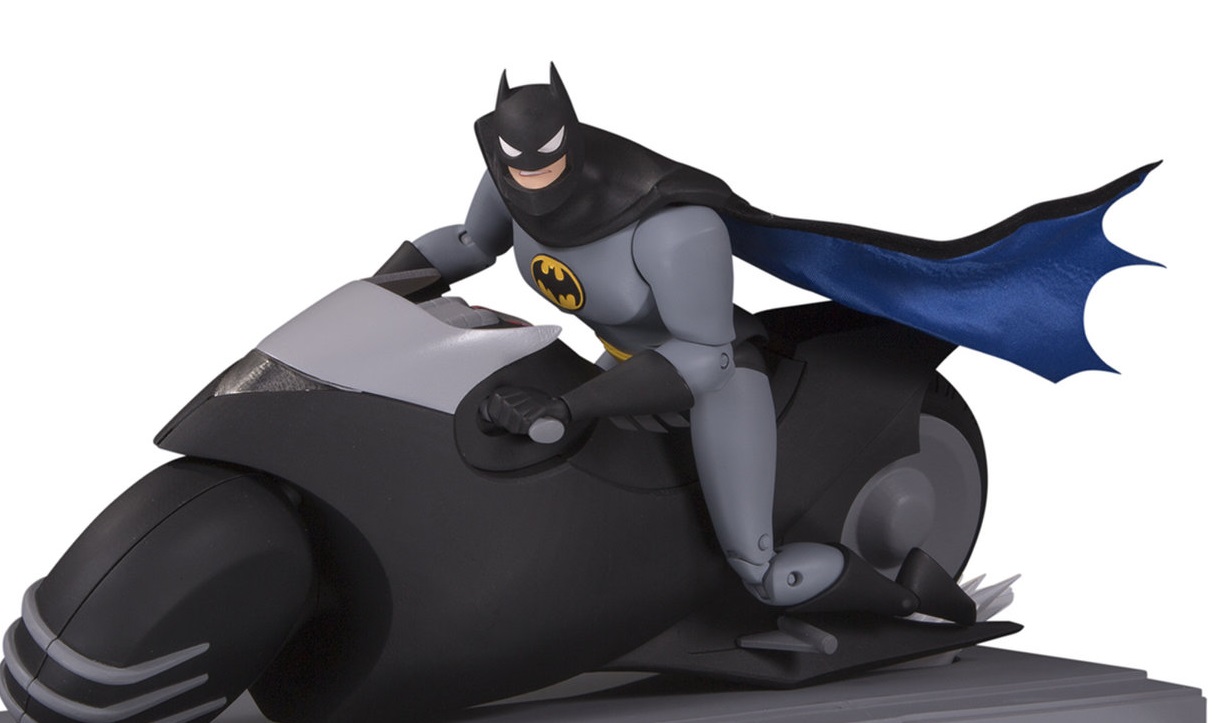 DC Collectibles has announced their upcoming releases for August and these are definitely going to wow all the collectors out there.  As usual, there is a wide variety of eras and interpretations present to please even the most discerning Bat-Fan.

Products coming from DC Collectibles include a Batman Black and White Mini-Figure 7-pack set, a Batman and Batcycle set based on Batman: The Animated Series, a statue of The Drowned from Batman: Dark Knights Metal, a new Designer Series statue of Nightwing by Jim Lee, and of course there’s a Harley Quinn too!

While prices vary from product to product, all solicits appear to be available starting as early as July. The entire DC Collectibles solicits for products dealing with the Batman Universe can be found below. DC Collectibles’ long-running statue line, BATMAN: BLACK AND WHITE, has captured the hearts of collectors and comics fans alike with its interpretations of the World’s Greatest Detective and select Gotham City characters by the industry’s brightest stars.
Starting in 2019, DC Collectibles is creating an all-new offshoot of the beloved black-and-white collectibles line, this time offering 3.75″ tall PVC figures. Released in sets of seven, including resized rereleases of some of the most popular statues in the line’s history, each set will come with six previously available mini figures plus one exclusive, never-before-released edition only available in this set.
Coming in July 2019, Box Set Two features figures from:
(All figures are Batman unless otherwise noted.)
– Bruce Timm (Harley Quinn)
– Frank Quitely (Robin)
– Mike Allred
– John Romita Jr.
– Gary Frank
– Eduardo Risso
– An exclusive mini figure based on the beloved Batman: The Animated Series Dark Knight
• Figures measure approximately 3.75″ tall
• Allocations may occur
• Final products may differ from images shown
• Approximately 6 units per carton
ON SALE JULY 2019
$35.00 US Gotham City is a dense, sprawling city with tall buildings, busy highways
and dark alleys. In his quest to protect the city, sometimes Batman
needs a vehicle to go where the Batmobile cannot. Enter the Batcycle.
Based on the design from the beloved Batman: The Animated Series,
this stylish figure set comes with a sleek, art deco-inspired
light-up Batcycle and an exclusive Batman figure.
• Figure measures approximately 6″ tall
• Allocations may occur
• Final products may differ from images shown
• Approximately 4 units per carton
ON SALE AUGUST 2019
$60.00 US based on art by GREG CAPULLO
sculpted by ADRIENNE SMITH
Rocking into our world from the pages of DARK NIGHTS: METAL comes a nightmarish fusion of a gender-flipped Batman and Aquaman—the Drowned. Bryce Wayne came from Earth-11 and harbored a deep hatred of the Atlanteans for their role in the death of her beloved, Sylvester Kyle. In a quest to avenge Kyle, she spliced her DNA with that of Atlanteans, becoming a super-powered Dark Knight capable of breathing and fighting underwater. This carefully detailed statue highlights the unique character design of this mashup, as the Drowned has her own trident and cape, and sports the flowing hair of a submerged and vengeful Dark Knight.
• Limited to 5,000 pieces and individually numbered
• Figures measure approximately 7″ tall
• Allocations may occur
• Final products may differ from images shown
• Approximately 8 units per carton
ON SALE AUGUST 2019
$85.00 US based on art by JIM LEE
sculpted by ALEJANDRO PEREIRA
The DC DESIGNER SERIES line is born from the imaginative vision of the comics industry’s top artists. Coming from the pages of the blockbuster series BATMAN: HUSH, this polyresin statue captures Lee’s now-iconic take on Nightwing, complete with the former Boy Wonder’s twirling escrima sticks. This statue is limited to 5,000 units.
DC DESIGNER SERIES statues are based on art from the comics industry’s top creators and re-create their vision in vivid 3-D detail.
• Limited to 5,000 pieces and individually numbered
• Figures measure approximately 12.90″ tall
• Allocations may occur
• Final products may differ from images shown
• Approximately 6 units per carton
ON SALE AUGUST 2019
$150.00 US designed by JOHN TIMMS
sculpted by PAUL HARDING
Since her first appearance in 1992, Harley Quinn has captured the hearts of both fans and comics artists alike. The HARLEY QUINN RED, WHITE & BLACK collection of statues are based on various depictions of Harley re-created in vivid 3-D detail.This latest statue in the series comes from famed artist John Timms.
Harley Quinn has come into possession of Batman’s cowl, cape and utility belt. While there’s surely a great story about how she got it, what’s more intriguing is what mischievous adventures she can undertake while beneath the cowl. Will she frame the Batman in a crime spree? Or auction off these missing goods to the highest bidder? Whatever choice she makes, it’s a good guess she’ll be smiling when she does it.
• Limited to 5,000 pieces and individually numbered
• Figures measure 7.28″ tall
• Allocations may occur
• Final products may differ from images shown
• Approximately 6 units per carton
ON SALE AUGUST 2019
$80.00 US