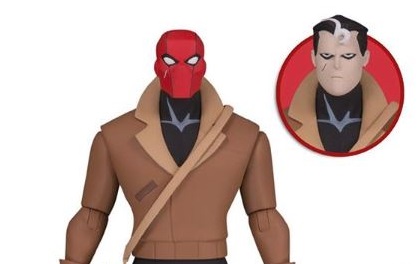 DC Collectibles has figured out a sure-fire method to capture all our money, Bat-Fans.  They have announced three new figures coming based on the style of Batman: The Animated Series.  What’s so new and exciting about that? These three fan-favorite characters never appeared on the show! Jason Todd comes clad in his leather jacket with his molded Red Hood mask. His unmasked head features a dour expression and the iconic gray streak in his hair. Deathstroke also features an extra head for unmasked poses.  He looks more like his appearances in the comics around the same time the animated series was running on television, so retro fans will be extra happy with him. Azrael is featured wearing his Batman armor that appeared during the Knightfall storyline in the comics.  Trust us, this armor is about as detailed as can be while keeping to the BTAS art style.

Prices and release dates have not yet been announced, but we expect they will announce something soon. No way fans can stay in suspense over these too long.