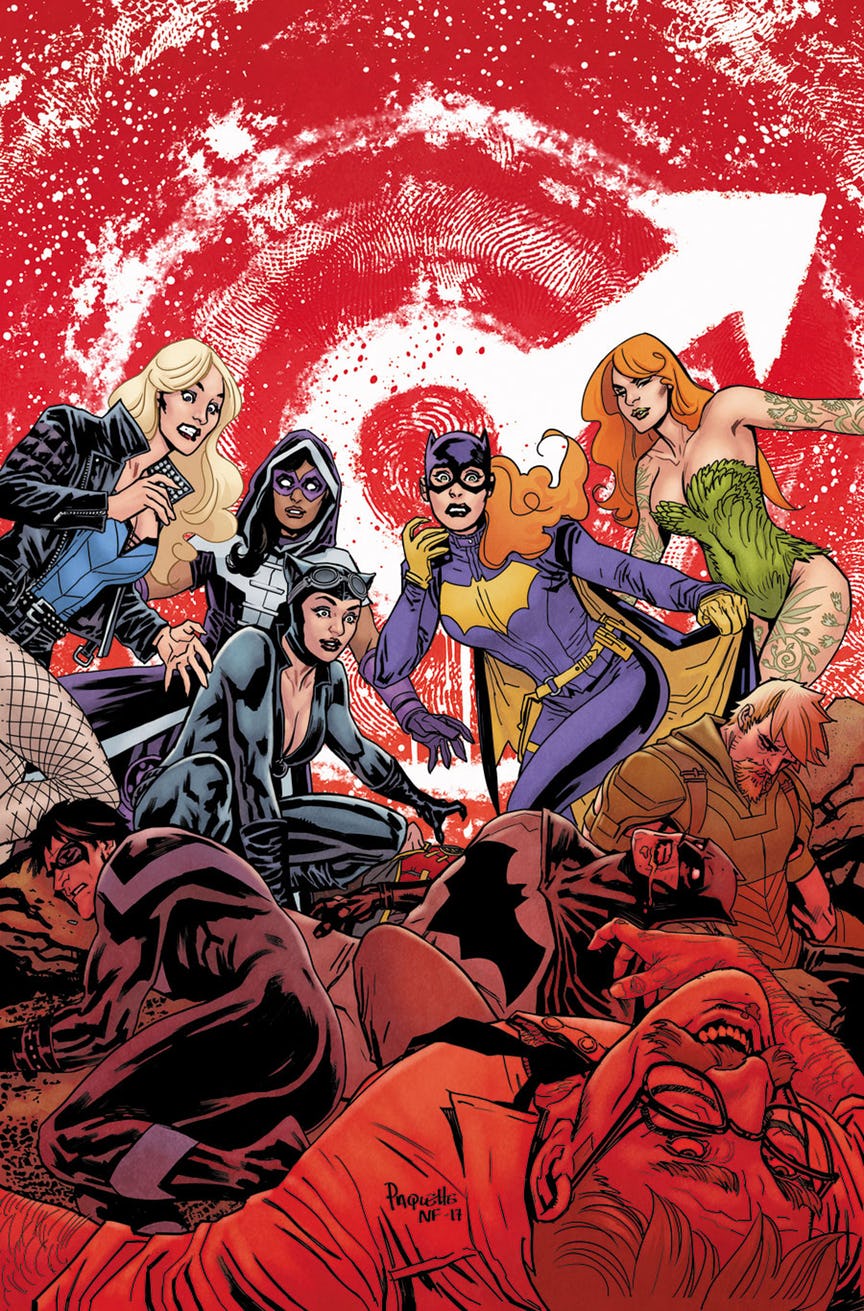 October will be bringing us the first issues of two special Batman series: White Knight and Dark Prince Charming. Written and illustrated by Sean Gordon Murphy, Batman: White Knight #1 will be released on the 4th of October, the first of seven issues. It will be your regular 32-page issue and cost the same as a regular monthly title, $3,99. Batman: The Dark Prince Charming, on the other hand, will be coming to stores at the price of $12,99, with 64 pages, and European format (7.0625” x 10.1875”) – roughly 50% bigger than the usual American format. Written and illustrated by Enrico Marini, the first volume is advanced solicited as it releases on November 1 with the second volume due out in 2018. We also see the addition of a new Shadow/Batman mini-series from Dynamite featuring six issues written by Steve Orlando and art by Giovanni Timpano.

As for the regular series, “The War of Jokes and Riddles” will be coming to an end in the pages of Batman #32, and it will be followed by “A Dream of Me”. The first issue of the arc will be illustrated by Joëlle Jones. Whether she will remain for the full story or if just one issue remains unclear. “A Lonely Place of Living” continues on the pages of Detective Comics, following Tim’s escape from Mr. Oz’s prison, while in the pages of Action Comics, Superman fights Mr. Oz himself.

Spawning out of Metal, three more Batman specials are being solicited: The Devastator, The Batman who Laughs and Batman: Lost. Those titles had already been announced, but not their creative teams. Devastator will be written by Frank Tieri and illustrated by Tony S Daniel, The Batman who Laughs will be written by James Tynion IV with art by Riley Rossmo, and Lost will be by Scott Snyder with art by Olivier Coipel and Bengal. Dark Nights: Metal itself doesn’t get a solicitation because issue #3 got solicited together with the September issues.

In Greater Gotham, two new titles have been announced: Ragman, which will take place in Gotham City, and Harley & Ivy Meet Betty & Veronica, a special mini series in partnership with Archie Comics. New arcs will be starting for Batgirl and the Birds of Prey, Batman Beyond, and Nightwing. Another little piece of information comes from the cover of Nightwing: The New Order. The art shows Batwoman and Red Robin standing together with Dick in his Nightwing uniform, holding the American flag, so we can expect some Bat-family action in it.

Greater DC will be bringing us the final issue of “Legacy” in the pages of Justice League, and of “Panic on the Microverse” in Justice League of America, while a new arc will be starting in Suicide Squad. Mirka Andolfo, previously one of the Bombshells artists, will be taking over Teen Titans. Also, a new Digital First series has been announced: Gotham City Garage.

Batman #32-33 [10/04 – 10/18] Story by TOM KING; art by MIKEL JANIN and JOELLE JONES. “THE WAR OF JOKES AND RIDDLES” finale and “A DREAM OF ME” part one. Batman gets Catwoman’s answer to his proposal after confessing his greatest sin. The following arc will have Batman travelling around on a quest to better himself. 32 pg, $2.99 US

Batman: The Dark Prince Charming Book One HC [11/01] Story and art by ENRICO MARINI. What secret connection do both Batman and The Joker share with a strange and mysterious young girl? After she’s kidnapped by The Joker, Batman must plunge deep into the underworld of Gotham City and race against time to find out where she’s being held. 64 pg, 7.0625” x 10.1875”, $12.99 US. 1 of 2

Batman: White Knight #1 [10/04] Story and art by SEAN MURPHY. Cured of his insanity and homicidal tendencies, The Joker, now known as “Jack,” sets about trying to right his wrongs. First he plans to reconcile with Harley Quinn, and then he’ll try to save the city from the one person who he thinks is truly Gotham City’s greatest villain: Batman. 32 pg, $3.99 US. 1 of 7.

The Shadow/Batman #1 [10/04] Story by STEVE ORLANDO and art by GIOVANNI TIMPANO. The World’s Greatest Mystery. The World’s Greatest Detective. They can barely stand each other, so how will they possibly deal with the World’s Greatest Evil? What legacy can two of the world’s most enduring icons of justice leave once they discover an ancient evil has been living inside the world they protect for centuries, attached to its heart. Can Batman and the Shadow save the world without killing it in the process? 32 pg, #3.99 US. 1 of 6

Batgirl #16 [10/25] Story by HOPE LARSON; art by CHRIS WILDGOOSE and CAM SMITH.”SUMMER OF LIES” part three. After being mislead to believe that Mad Hatter was the true villain, Nightwing and Batgirl discover the truth. 32 pg, $3.99 US

Batwoman #8 [10/18] Story by MARGUERITE BENNETT; art by FERNANDO BLANCO. “FEAR AND LOATHING” part two. Kate is stuck in the Sahara with her father, and Colony Prime comes after them. 32 pg, $3.99 US

Harley & Ivy Meet Betty & Veronica #1 [10/04] Written by PAUL DINI and MARC ANDREYKO; Art by LAURA BRAGA. A certain botany-obsessed super-villain. When Poison Ivy enlists her bestie, Harley, to kidnap both Veronica Lodge, daughter of Riverdale’s most important citizen, and her friend Betty, she’s counting on some assistance. 32 pg, $3.99 US. 1 of 6

Ragman #1 [10/11] Story by RAY FAWKES; art by INAKI MIRANDA. After a failed mission to raid a tomb in the Israeli Desert, war veteran Rory Harper is plagued by the death of his partners. As Rory battles his guilt back in Gotham City, he discovers that what was in that tomb has followed him home. 32 pg, $2.99 US. 1 of 6.

Justice League #30-31 [10/04 – 10/18] Written by BRYAN HITCH; art by FERNANDO PASARIN and OCLAIR ALBERT. “LEGACY” part five and finale. Sovereign, a threat from the future, has arrived. The Justice League is missing, all except Batman and Wonder Woman. They work with the future children of the League to put a stop on The Darkness. 32 pg, $2.99 US

Suicide Squad #27-28 [10/11 – 10/25] Story by ROB WILLIAMS; art by EDUARD PETROVICH. “THE SECRET HISTORY OF TASK FORCE X” parts one and two. Amanda Waller receives a message from outer space claiming that all of her secrets are known. The Squad is sent to an old satellite to investigate where they meet two long-lost characters of DC. 32 pg, $2.99 US

Trinity #14 [10/18] Story by ROB WILLIAMS; art by V KEN MARION and RAY McCARTHY. “DARK DESTINY” part three. The Trinity, the Outlaws, Constantine, Deadman and Zatanna together try to find a way to close the Pandora Pits. 32 pg, $3.99 US

Injustice 2 #11-12 [10/04 – 10/18] Story by TOM TAYLOR; art by BRUNO REDONDO and JUAN ALBARRAN. Ra’s al Ghul jungle stronghold is under siege, and Batman is captured by Poison Ivy. The battle culminates in tragedy. Meanwhile, at the Presidential Inauguration in Washington, D.C., things go horribly wrong. 32 pg, $2.99 US

Gotham City Garage #1-2 [10/11 – 24/11] Story by JACKSON LANZING and COLLIN KELLY; art by BRIAN CHING. New series inspired by the DC Collectibles statue line. It’s been decades since Governor Lex Luthor turned Gotham City into a modern utopia, saving his people from the devastation that made the rest of the continent a wasteland. But his city isn’t paradise for everyone. If the Lexes network misfires, and a citizen wakes up and steps out of line, the Bat and his minions are brutal in restoring the status quo. So when young Kara Gordon, whose ridealong tech has never functioned optimally, rushes headlong into the Freescape, she’s shocked to find Gotham City Garage—where new friends might become family, if she lives long enough. 40 pg, $3.99 US