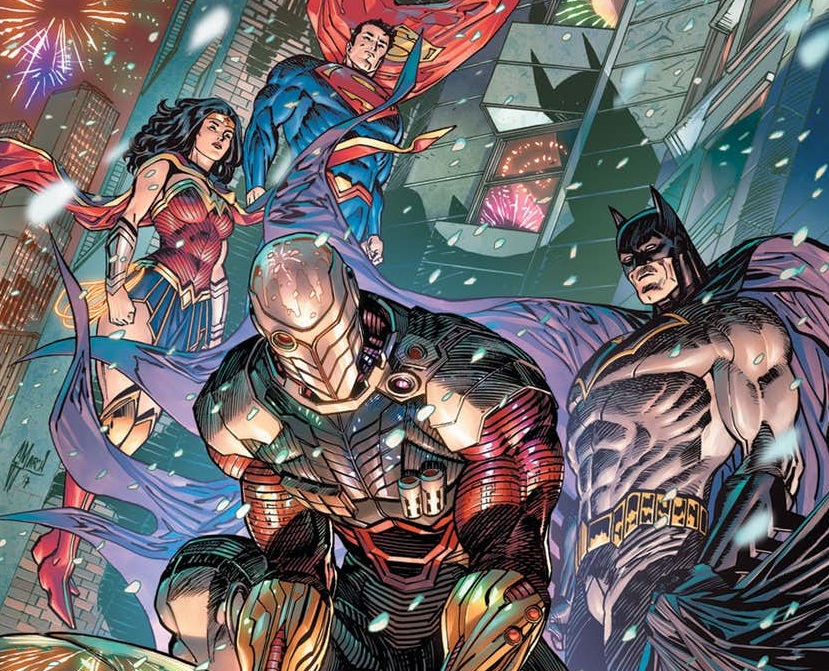 Santa will be bringing us Batman fans a gift this December wrapped in the pages of DC’s Holiday Special. After a while away from comics, Denny O’Neil will be returning to write a Batman story. At the cost of $9,99, the 96-page book will have an all-star creative team with names such as Greg Rucka, Jeff Lemire, Christopher Priest, Rafael Albuquerque, Bilquis Evely and Francis Manapul. Together with the $4.99 for Doomsday Clock #2 and Dark Nights: Metal #4, Santa will also be taking away all of our money. The December Solicitations list features Dark Nights: Metal #5, but it will only come out in January. The entire series is being early solicited.

Over on the Batman, we have a new arc. Starting in issue #35, “Superfriends” will be a two-part story focusing on the friendship of Batman and Superman. The Victim Syndicate is returning to the pages of Detective Comics as “The Fall of the Batmen” continues with parts two and three. Not much news can be taken from the solicitation for White Knight, but the official one has this as issue 3 of 7, while Sean Murphy has confirmed that the series will in fact run for 8 issues. As for Creature of the Night, we will see Bruce Wainwright reach adulthood in the second issue.

December will also be bringing some changes in the creative teams, with Sam Humphries taking Nightwing and Christopher Priest taking Justice League. Bernard Chang will be joining Humphries for art duties, and joining Priest will be Pete Woods. With Chang leaving Batman Beyond, Phil Hester and Ande Parks will be taking the torch.

Batgirl will be getting a Holiday Special with art by Sami Basri, while “MANSLAUGHTER” comes to an end on Batgirl and the Birds of Prey. Also coming to an end is “THE SECRET HISTORY OF TASK FORCE X”, the six-part story arc of Suicide Squad. Mother Panic was once again not solicited, making December the second month in a row without the title.

A crossover event will be taking the pages of Teen Titans and Super Sons. “SUPER SONS OF TOMORROW” will be more Super-centric than Bat-centric, but still in the realms of the Batman Universe. It will also include two issues of Superman, all four of them will be written by Peter Tomasi.

Detective Comics #970-971 [12/13 – 12/27] Story by JAMES TYNION IV; art by JOE BENNETT. “FALL OF THE BATMEN” parts two and three. Spoiler and the team still have unfinished business to resolve, and with the Victim Syndicate on the move and Clayface on the edge, the team faces a crossroads. 32 pg, $2.99 US

Batman: White Knight #3 [12/06] Story and art by SEAN MURPHY. Tragedy strikes, and the Bat-family face the fight of their lives against an army of super-villains and waning public support. A new discovery reinforces Jack’s plot to jeopardize the Dark Knight’s standing in Gotham City, and Harley’s obsession with The Joker reaches a new height—and threatens to change the game for good 32 pg, $3.99 US. 3 of 8.

Batman: Creature Of The Night #2 [12/27] Written by KURT BUSIEK; Art by JOHN PAUL LEON. In a world where Batman is only a comic book character, young Bruce Wainwright is starting to feel a surprising strength and power grow inside him. After years of mourning the loss of his parents, that power feels good–intoxicating, even! The question is, to what use will he put it? 48 pg, $5.99 US. 2 of 4

Batman/Teenage Mutant Ninja Turtles II #1-2 [12/06 – 12/20] Written by JAMES TYNION IV; Art by FREDDIE E. WILLIAMS II.  When Donatello goes looking for a new mentor to help him improve his fighting skills, he opens a doorway to another reality, hoping to summon the Turtles’ one-time ally, Batman. But instead, he gets sent to Gotham City and someone else comes through the open portal—Bane! 32 pg, $3.99 US

The Shadow/Batman #3 [12/6] Written by STEVE ORLANDO; Art by GIOVANNI TIMPANO. Centuries ago, the Silent Seven put their hand around the world’s neck. They’ve never let go. From generation to generation, the famed invisible hand guiding the global economy, guiding progress, has been a clenched fist. But with their previous leader murdered in the street, who is currently at the helm of this shadow conspiracy, and how have they maintained their quiet threat for so long? Batman and the Shadow may not have the answer, but it’s a good thing Bruce Wayne and Allard Cranston do. 32 pg, $3.99 US. 3 of 6.

Batgirl #18 [12/27] Story by HOPE LARSON; art by SAMI BASRI. Harley Quinn infects Barbara Gordon’s company party with a killer virus, Batgirl must embark on a wild-goose chase around the city to find a cure. 32 pg, $3.99 US

Batgirl and the Birds of Prey #17 [12/13] Story by JULIE BENSON and SHAWNA BENSON; art by ROGE ANTONIO. “MANSLAUGHTER” finale. Together, the Birds of Prey, Catwoman, Poison Ivy, Harley Quinn, Batwoman, Spoiler, Gotham Girl and Wonder Woman face the Daughters of Gotham and their leader, Patient Zero. 32 pg, $3.99 US

Batman Beyond #15 [12/27] Story DAN JURGENS; Art by PHIL HESTER and ANDE PARKS. “THE LONG PAYBACK” part two! Someone behind the scenes is coordinating an attack of Batman’s greatest villains against him. 32 pg, $3.99 US

Batman and The Signal #2 [12/] Written by SCOTT SNYDER and TONY PATRICK; Art by CULLY HAMNER. Metahuman population is booming in the Narrows, an event that might be connected to a group of teenage villains. Duke will work with the GCPD to solve the case. 32 pg, $3.99 US. 2 of 3.

Batwoman #10 [12/20] Story by MARGUERITE BENNETT; art by SCOTT GODLEWSKI. “Home Horrors” part one. After her trip around the world hunting the infamous Many Arms of Death, Batwoman returns to Geneva, the site of her most brutal losses and memories. 32 pg, $3.99 US

Harley Quinn #33-34 [12/06 – 12/20] Story by AMANDA CONNER and JIMMY PALMIOTTI; art by JOHN TIMMS. “AFTERMATH” part two and “GOSSAMER”. The elections change Harley’s life forever, and for one of the people closest to her, it’s ended their life. In the following issue, Harley encounters the looniest guest star yet. And in the “Secret Origins” backup story, you’ll learn how the incredible Eggy came to be, and next Big Tony, Harley’s landlord. 32 pg, $2.99 US.

Harley & Ivy Meet Betty & Veronica #3 [12/06] Written by PAUL DINI and MARC ANDREYKO; Art by LAURA BRAGA. Betty and Veronica wake up in Harley and Ivy’s clothes, with henchmen chasing them, Meanwhile, Riverdale doesn’t know what to do with certain members of the cheerleading squad. 32 pg, $3.99 US. 3 of 6

Nightwing #34 [12/06] Story by TIM SEELEY; art by JAVIER FERNANDEZ. “RAPTOR’S REVENGE” finale. With Nightwing injured, Raptor attempts to turn the citizens of Blüdhaven into monsters. It will take everything Nightwing has to stop Raptor. 32 pg, $2.99 US

Nightwing #35 [12/06] Story by SAM HUMPHRIES; art by BERNARD CHANG “THE UNTOUCHABLE: HUNTERS!” A case from his past in Gotham City to rear its head in Blüdhaven — a murderer he never set eyes on, but whose unmistakable signature has arrived in his new city. 32 pg, $2.99 US

Nightwing: The New Order #5 [12/27] Story by KYLE HIGGINS; art by TREVOR McCARTHY. After a stunning revelation about the nature of Jake’s powers, the former Titans head to Metropolis to join forces with the one person who they believe they can restore the world’s superpowers—the depowered Superman. Caught between his old friends and the new order he created, Dick Grayson refuses to let his son become a weapon for either side. 32 pg, $3.99 US. 5 of 6.

Ragman #3 [12/13] Story by RAY FAWKES; art by INAKI MIRANDA. As Rory learns how to use the Suit of Souls, he hits the streets of Gotham City, finding and interrogating demonic fiends that continue to crawl into the city. But when Ragman finds himself fighting a former ally, he must turn to the help of Etrigan. 32 pg, $2.99 US. 3 of 6

Red Hood and the Outlaws #17 [12/13] Story by SCOTT LOBDELL; art by DEXTER SOY. “BIZARRO REBORN” part four. The Outlaws reluctantly join the members of the Suicide Squad for a mission to the Arctic. 32 pg, $3.99 US

Dark Nights: Metal #5 [01/10] Written by SCOTT SNYDER; art by GREG CAPULLO and JONATHAN GLAPION. The Justice League faces the final extinguishing of our world, invaded on all sides by unimaginable nightmares, fueled on to the edge of oblivion only by the belief that there must be a light in the endless darkness—somewhere. 32 pg, $4.99 US. 5 of 6.

Justice League #34-35 [12/06 – 12/20] Written by CHRISTOPHER PRIEST; Art by PETE WOODS. “LOST” parts one and two. When the Justice League is confronted by three concurrent threats, a sleep-deprived Batman makes a crucial error that causes an unthinkable—and potentially unforgivable—tragedy. As they attempt to regain their balance, an alien infestation threatens the Earth. 32 pg, $2.99 US

Justice League of America #20-21 [12/13 – 12/27] Story by STEVE ORLANDO; art by HUGO PETRUS and STEPHEN BYRNE. “SURGICAL STRIKE” finale and “AGAINST THE INVISIBLE GOD”. As Vixen and Prometheus’ battle reaches its climax, Afterthought goes toe to toe with the Justice League in the most disgusting and dangerous place in the universe—the inside of Lobo’s body. Next, the Ray quits the Justice League to return to his hometown of Vanity, only to discover that a new hero has taken his place as the city’s protector. 32 pg, $2.99 US

Suicide Squad #31-32 [12/13 – 12/27] Story by ROB WILLIAMS; art by ELEANORA CARLINI. “THE SECRET HISTORY OF TASK FORCE X” parts five and finale. As the Suicide Squad continues to fight a war on two fronts, Harley Quinn is faced with an impossible choice—bring her former teammate Rick Flag back from the Phantom Zone. Meanwhile, Deadshot and company discover the identity of the person who started this war. The Squad must find a way to send the unstoppable Red Wave beast into the sun and destroy it once and for all…the only problem…one of their own needs to go with it. 32 pg, $2.99 US

Titans #18 [12/13] Story by DAN ABNETT; art by BRETT BOOTH and NORM RAPMUND. “THE RISE OF TROIA”. Wally West is dead, the Titans are all but beaten and Donna Troy must go toe to toe with her worst nightmare—Troia—a twisted version of herself from the not-so-distant future, bent on destroying her friends and pushing Donna toward her own dark fate. 32 pg, $3.99 US

Trinity #16 [12/20] Story by ROB WILLIAMS; art by V KEN MARION and MICK GRAY. “OLD ACQUAINTANCE”. It’s New Year’s Eve, and as the snow falls on New York City our Trinity reunites to save the life of someone completely unexpected – Deadshot. 32 pg, $3.99 US

Superman #37 [12/20] Written by PETER J. TOMASI and PATRICK GLEASON; Art by DOUG MAHNKE and JAIME MENDOZA. Part one. The Batman of Tomorrow travels to the present to prevent a cataclysmic disaster before it happens, revealing that Superboy will soon be responsible for the death of millions. 32 pg, $2.99 US

Teen Titans #15 [12/27] Written by guest writer PETER J. TOMASI; Art by FRANCIS MANAPUL. Part three. The Batman of Tomorrow reveals himself to the Teen Titans to recruit them to his cause. It’s the Teen Titans vs. the Super Sons. 32 pg, $3.99 US

Gotham City Garage #5-6 [12/13 – 12/27] Story by JACKSON LANZING and COLLIN KELLY; art by ANEKE. Barbara Gordon knows what is good and right and true in the world. Her ridealongs make sure of that—and so does her mentor, Batman. But when she discovers the lies underneath the Garden’s sunny façade, her rebellion sparks a confrontation no one is ready for. 32 pg, $2.99 US. Digital first