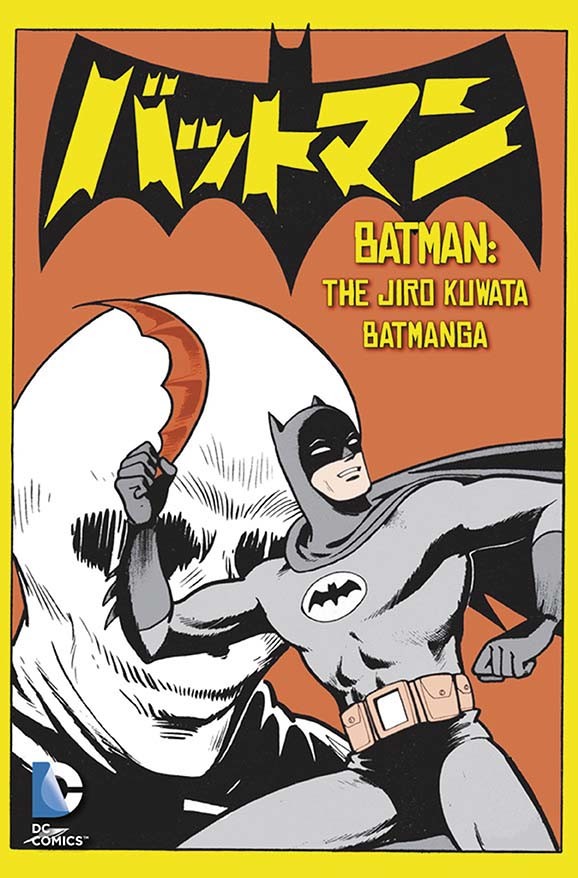 DC has released some advanced solicitations for Batman-related graphic novels and trade releases that will be available throughout the month of December.  Most of these are collected editions of current ongoing titles including the first trade collections of some of DC’s current weekly titles like Batman Eternal and The New 52:  Future’s End but December’s solicitations also include some new trade releases highlighting some titles from the old DC continuity such as Nightwing Vol. 1:  Bludhaven which includes stories from Nightwing’s 4-issue miniseries  and #1-8 of his solo series from the 1990s.

BATMAN: THE JIRO KUWATA BATMANGA BOOK 1 TP
Written by JIRO KUWATA
Art and cover by JIRO KUWATA
On sale DECEMBER 3 • 352 pg, B&W with spot color, 1 of 3, 5.75” x 8.1875, $14.99 US RATED T • DIGITAL FIRST
In the 1960s, at the height of the Batman TV series’ popularity, a shonen manga magazine in Japan serialized fifty-three chapters of original comics starring The Dark Knight, all written and illustrated by Managaka Jiro Kuwata. Now, DC Entertainment is proud to publish the complete Batman Manga adventures in English for the first time in three painstakingly restored volumes. The adventure begins when the Dynamic Duo faces the insidious threat of Lord Death Man!

THE NEW 52: FUTURES END VOL. 1 TP
Written by BRIAN AZZARELLO, KEITH GIFFEN, DAN JURGENS and JEFF LEMIRE
Art by PATRICK ZIRCHER, JESUS MERINO, DAN JURGENS, AARON LOPRESTI, SCOT EATON and others
Cover by RYAN SOOK
On sale DECEMBER 3 • 416 pg, FC, $39.99 US
Five years from now, the DC Universe is reeling from a war with another Earth, leaving the world unprepared for an approaching evil that threatens to destroy the future. As heroes are turned into mindless villains, the planet as we know it is no more. The only salvation lies in the past, where this future apocalypse must be averted. Can a time-traveling Batman Beyond help a massive cast of the DCU’s finest avert the impending apocalypse in these stories from issues #0-17 of the new weekly series?

BATMAN ETERNAL VOL. 1 TP
Written by SCOTT SNYDER, JAMES TYNION IV, RAY FAWKES, JOHN LAYMAN and TIM SEELEY
Art by JASON FABOK, DUSTIN NGUYEN, DEREK FRIDOLFS, ANDY CLARKE, TREVOR McCARTHY, EMANUEL SIMEONI, GUILLEM MARCH, RICCARDO BURCHIELLI, IAN BERTRAM, MIKEL JANIN and others
Cover by JASON FABOK
RETROSOLICIT • On sale NOVEMBER 26 • 448 pg, FC, $39.99 US
In the wake of FOREVER EVIL, the world looks at heroes in a different light, creating tension between Batman and his allies and the Gotham City Police Department. When a gang war breaks out and new villains arise, it’s up to the Dark Knight, Batgirl, and others to turn the tide as best as they can – but will the GCPD be a help or a hindrance? Plus, a fan-favorite character makes her long-awaited DC Comics – The New 52 debut: Stephanie Brown! Don’t miss these stories from BATMAN ETERNAL #1-20!

BATGIRL VOL. 4: WANTED TP
Written by GAIL SIMONE
Art by DANIEL SAMPERE, FERNANDO PASARIN, DERLIS SANTACRUZ, and others
Cover by ALEX GARNER
On sale DECEMBER 17 • 192 pg, FC, $16.99 US
In these tales from BATGIRL #20-26 and BATMAN: THE DARK KNIGHT #23.1: VENTRILOQUIST, Batgirl struggles to continue fighting crime after the death of her brother, James, Jr. With her relationships with both Batman and her father strained, Batgirl must face one of Batman’s most ruthless villains: The Ventriloquist.

NIGHTWING VOL. 5: SETTING SON TP
Written by KYLE HIGGINS
Art by BRETT BOOTH, NORM RAPMUND and WILL CONRAD
Cover by EDDY BARROWS
On sale DECEMBER 10 • 200 pg, FC, $16.99 US
Nightwing has moved to Chicago, but the ghosts of Gotham City won’t let him be. The Mad Hatter forces Nightwing into an uneasy alliance with the mysterious Marionette – and the sins of Dick’s past will come back to haunt him unless he can make peace with his previous life. Collecting issues #25-30 of the hit series, plus ANNUAL #1!

RED HOOD AND THE OUTLAWS VOL. 5: THE BIG PICTURE TP
Written by JAMES TYNION IV and WILL PFEIFER
Art by JEREMY HAUN, STEPHEN SEGOVIA, RAFAEL SANDOVAL and others Cover by STEPHEN SEGOVIA
On sale DECEMBER 10 • 160 pg, FC, $14.99 US
Featuring a BATMAN: ZERO YEAR tie-in, this action-packed volume finds the Outlaws in their toughest bind yet. Ra’s al Ghul is back, the Outlaws are being held captive, and Jason Todd has lost his memories. Collects issues #27-31, plus DC UNIVERSE PRESENTS #17-18.

BATMAN: LEGENDS OF THE DARK KNIGHT VOL. 3 TP
Written by PAUL JENKINS, RAFAEL ALBUQUERQUE, PETER MILLIGAN and others
Art by OMAR FRANCIA, RAFAEL ALBUQUERQUE, RICCARDO BURCHIELLI and others
Cover by RAFAEL ALBUQUERQUE
On sale DECEMBER 10 • 192 pg, FC, $16.99 US
These stories from issues #11-13 and 100-PAGE SUPER SPECTACULAR #1 explore Batman’s relationship with Alfred during his early years as a crimefighter, his methods of dealing with super-powered foes and more.

NIGHTWING VOL. 1: BLUDHAVEN TP
Written by DENNIS O’NEIL and CHUCK DIXON
Art by GREG LAND, SCOTT McDANIEL, KARL STORY and others
Cover by SCOTT McDANIEL
On sale DECEMBER 3 • 288 pg, FC, $19.99 US
Nightwing flies solo in these 1990s stories from his 4-issue miniseries and issues #1-8 of his solo series! To kick things off, Nightwing uncovers new facts about the murder of his parents that suggests there was far more to their deaths than he ever suspected. But shadowy forces have reasons to keep the truth buried!

SUPERMAN/BATMAN VOL. 2 TP
Written by JEPH LOEB, SAM LOEB and others
Art by CARLOS PACHECO, ED McGUINNESS and others
Cover by ED McGUINNESS and DEXTER VINES
On sale DECEMBER 17 • 336 pg, FC, $19.99 US
Batman and Superman rule the Earth, and humanity must choose: obey or die! But will a team of unlikely freedom fighters save the world or destroy it? Also, the World’s Finest heroes take on a squad of revenge-seeking heroes on the hunt for the murderer of one of their teammates – and their top suspects are Batman and Superman. Collects SUPERMAN/BATMAN issues #14-26.