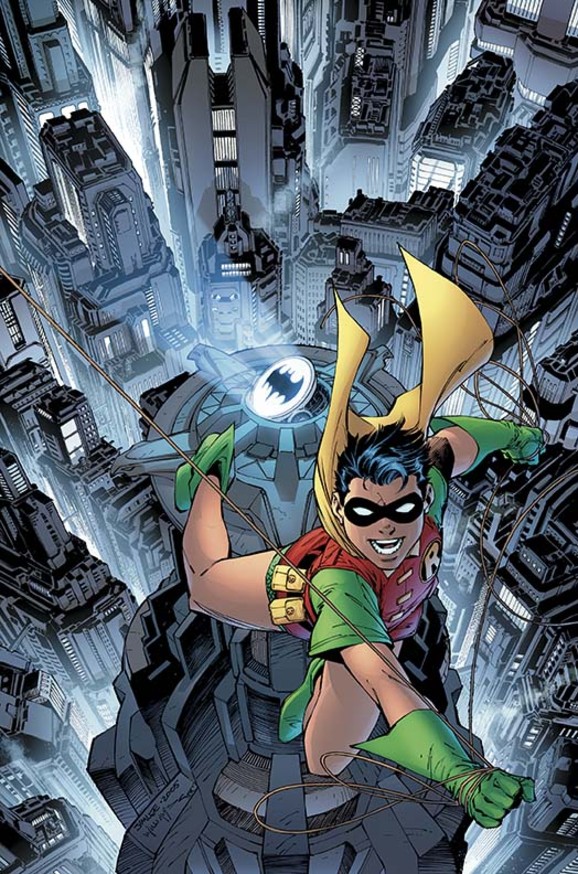 DC has released some advanced solicitations for Batman-related graphic novels and trade releases that will be available throughout the month of March and April of 2015.  Several of these are for collected editions of current and former New 52 ongoing titles (including Vol. 6 of Batman which collects several issues that have not been part of Snyder’s larger story arcs in the title, Vol. 2 of Harley Quinn, Vol. 5 of Justice League, as well as collected editions of Batman Beyond 2.0, Batman ’66, and Tiny Titans) but DC is also releasing several other collected editions including a new Batman Noir edition of The Dark Knight Returns by Frank Miller, a deluxe hardcover edition of the popular title in black and white.  Other offerings worthy of note include a special Robin: The Boy Wonder hardcover billed as collecting some of the best Robin stories of all time in celebration of the 75th anniversary of the character featuring stories by Bill Finger, Don Cameron, Chuck Dixon and others.

Lastly, in April DC is releasing Superman/Batman: Michael Turner Gallery Edition in the latest of the Graphitti Designs’ Gallery Editions series.  These impressive (and expensive at $125) collected editions are billed as high-quality, Smythe-sewn hardcover books that capture every detail of the art at actual size, and are printed at 200 line-screen on a rich, heavy paper stock. With the goal of replicating the original art faithfully and in high definition.  This particular volume will collect Superman/Batman #8-13. Rounding out the book are numerous covers from Identity Crisis, Justice League of America, and other DC Comics titles that helped establish Michael Turner as a prominent DC artist.

Written by SCOTT SNYDER, MARGUERITE BENNETT and JAMES TYNION IV
Art by GREG CAPULLO, DANNY MIKI, ANDY KUBERT, DUSTIN NGUYEN, DEREK FRIDOLFS, ALEX MALEEV and others
Cover by GREG CAPULLO
On sale APRIL 29 • 224 pg, FC, $24.99 US
In these tales from BATMAN #0, 18-20, 28, 34 and BATMAN ANNUAL #2, look back to the early days of the Dark Knight, then see the impact of the wake of the death of his son Damian! Plus, has Batman’s worst foe become…Bruce Wayne? This title also includes three pivotal chapters from the epic ZERO YEAR storyline, and a chapter that ties in to BATMAN ETERNAL!

EARTH 2 VOL. 5: THE KRYPTONIAN HC
Written by TOM TAYLOR and DANIEL H. WILSON
Art by NICOLA SCOTT, TREVOR SCOTT, EDDY BARROWS and EBER FERREIRA
Cover by ANDY KUBERT
On sale APRIL 15 • 176 pg, FC, $24.99 US
A new super being named Val-Zod has appeared – and the heroes of Earth-2 must convince him to help them in one last, desperate attempt to stop Kal-El. Can they band together in time to prepare for Apokolips and the forces of Darkseid? And can Val-Zod become the hero they need him to be? Collects EARTH 2 #21-26 and EARTH 2: FUTURES END #1!

BATMAN ‘66 VOL. 3 HC
Written by JEFF PARKER, ART BALTAZAR and FRANCO
Art by JONATHAN CASE, DARIO BRIZUELA, TED NAIFEH, DEAN HASPIEL, PAUL RIVOCHE, CRAIG ROUSSEAU and WILFREDO TORRES
Cover by MICHAEL ALLRED
On sale APRIL 22 • 160 pg, FC, $19.99 US
In this third BATMAN ‘66 collection, The Dynamic Duo face The Joker, The Penguin, the Queen of Diamonds and a Bat-Robot of their own making…that may put Batman and Robin out of a job! Collects issues #11-16.

BATMAN BEYOND: JUSTICE LORDS BEYOND TP
Written by KYLE HIGGINS and CHRISTOS GAGE
Art by THONY SILAS, DEXTER SOY and others
Cover by KHARY RANDOLPH
On sale MARCH 11 • 176 pg, FC, $16.99 US
Wonder Woman is back, but what secret is she hiding? Meanwhile, Batman’s journey through the dystopian world of the Justice Lords takes a deadly turn as he faces Lord Superman! Collects BATMAN BEYOND #9-12.

BATMAN NOIR: THE DARK KNIGHT RETURNS DELUXE EDITION HC
Written by FRANK MILLER
Art by FRANK MILLER and KLAUS JANSON
Cover by FRANK MILLER
On sale APRIL 29 • 208 pg, B&W, 7.5” x 11.5”, $34.99 US
For the first time, DC Comics collects Frank Miller’s unforgettable Dark Knight epic in black and white! It is ten years after an aging Batman has retired, and Gotham City has sunk into decadence and lawlessness. Now, as his city needs him most, the Dark Knight returns in a blaze of glory. Joined by Carrie Kelly, a teenaged Robin, Batman takes to the streets to end the threat of the mutant gangs that have overrun the city. And after facing off against The Joker and Two-Face for the final time, Batman finds himself in mortal combat with his former ally, Superman, in a battle that only one will survive.

INJUSTICE: GODS AMONG US YEAR TWO VOL. 2 HC
Written by TOM TAYLOR
Art by BRUNO REDONDO, MIKE S. MILLER, STEPHANE ROUX, XERMANICO and others
Cover by JHEREMY RAAPACK
On sale APRIL 15 • 176 pg, FC, $22.99 US
With Superman’s reign over Earth secured, the Green Lantern Corps dispatches Kyle Rayner to investigate the situation. When he mysteriously disappears, the Guardians of the Universe are left with no choice but to remove Superman from his hard-won throne. But like all the others who have stood in Superman’s way since the death of his beloved wife, the Corps has a fight on their hands that will surely shake them to the core. Collects issues #7-12 and ANNUAL #1 of the hit series!

ROBIN, THE BOY WONDER: A CELEBRATION OF 75 YEARS HC
Written by BILL FINGER, DON CAMERON, CHUCK DIXON and others
Art by BOB KANE, JERRY ROBINSON, DICK SPRANG and others
Cover by JIM LEE and SCOTT WILLIAMS
On sale APRIL 1 • 400 pg, FC, $39.99 US
2015 marks the 75th anniversary of Robin, the Boy Wonder! DC Comics is proud to present this new hardcover anthology collecting some of Robin’s greatest stories, featuring his adventures with Batman, the Teen Titans and more!

TINY TITANS: RETURN TO THE TREEHOUSE TP
Written by ART BALTAZAR and FRANCO
Art and cover by ART BALTAZAR
On sale MARCH 11 • 128 pg, FC, $12.99 US
The Eisner Award-winning series is back in this new title collecting the six-issue miniseries! Superboy and Supergirl return to the treehouse to discover…it’s missing! Or is it just…really small? Who could have done such a thing? Find out as all your favorite Tiny Titans search for answers!

TEEN TITANS GO! VOL. 1: PARTY, PARTY TP
Written by SHOLLY FISCH, MERRILL HAGAN and AMY WOLFRAM
Art by BEN BATES, LEA HERNANDEZ and JORGE CORONA
Cover by DAN HIPP
On sale MARCH 4 • 128 pg, FC, $12.99 US
Join Robin, Starfire, Beast Boy, Cyborg and Raven as they display their unique brand of hijinks, mayhem and justice in these stories from issues #1-6 of their new series! But giant pizza monsters aren’t the only dastardly and delicious villains on the menu…so dig in, Titans!

SUPERMAN/BATMAN: MICHAEL TURNER GALLERY EDITION HC
Art by MICHAEL TURNER
Written by JEPH LOEB
Advance solicit • On sale in April • 208 pg, FC, 12” x 17” • $125.00 US
The art of comics legend Michael Turner is seen for the first time in it’s original form in the new SUPERMAN/BATMAN: MICHAEL TURNER GALLERY EDITION. This spectacular new book collects the “Supergirl” epic from SUPERMAN/BATMAN #8-13. Rounding out the book are numerous covers from IDENTITY CRISIS, JUSTICE LEAGUE OF AMERICA, THE FLASH and other DC Comics titles that helped establish Michael as an artistic force to be reckoned with. Graphitti Designs’ Gallery Editions replicate the look, feel and attitude of the artwork. Every page is reproduced at original size on heavy paper stock to provide the fan and collector with museum quality reproductions obtainable nowhere else. This stunning Gallery Edition collects Michael Turner’s work for DC Comics, reproduced directly from his uninked pencil art that was then enhanced and colored by the talented Peter Steigerwald. This format showcases Michael’s art with all the subtleties and details that have never been captured in this fashion until now.