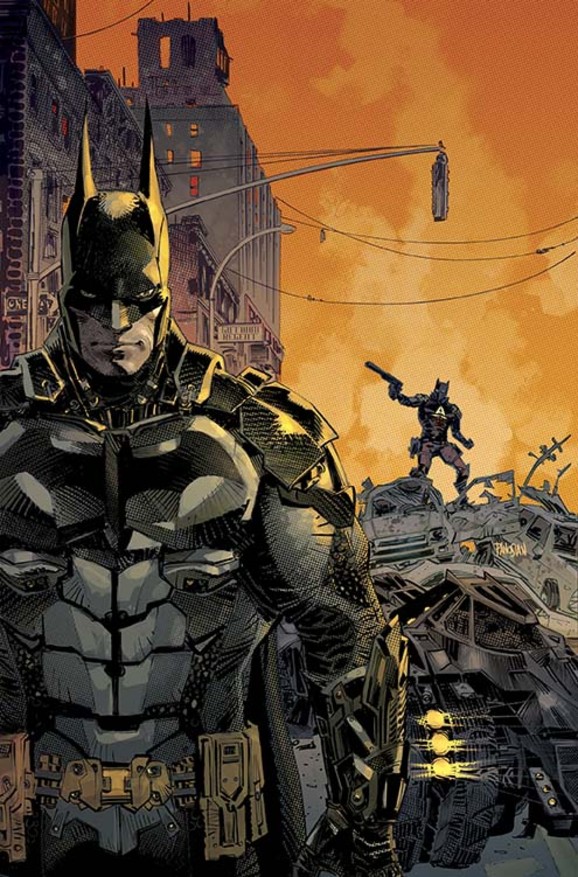 DC has released some advanced solicitations for Batman-related graphic novels and trade releases that will be available throughout the months of May and June of 2015.  Several of these are for collected editions of current and former New 52 ongoing titles (inluding Vol. 6 of Batman and Robin, Vol. 5 of Detective Comics, Vol. 5 of Batgirl, Vol. 2 of Batman/Superman, Vol. 1 of Earth Two: World’s End, and a trade paperback of the main Forever Evil title), in addition to other collected editions from either outside the New 52 line or from comics that predate the New 52.  Some of these include a trade paperback of the first four issues of the tie-in Arkham Knight comic, Vol. 4 of Batman: Legends of the Dark Knight, Vol. 2 of the comic Batman Adventures inspired by Batman: The Animated Series, and a paperback titled Batman: Arkham – The Riddler (which will include some of the best Riddler stories from Batman, Detective Comics and other titles from both the old and new DC universes).

BATMAN AND ROBIN VOL. 6: THE HUNT FOR ROBIN HC
Written by PETER J. TOMASI
Art by ANDY KUBERT, PATRICK GLEASON and MICK GRAY
Cover by PATRICK GLEASON
On sale JUNE 24 • 256 pg, FC, $24.99 US
After losing his son Damian – a.k.a. Robin – Batman has finally found peace with his death. Damian’s grandfather, Ra’s al Ghul, has not, however. In order to resurrect Robin, he’s stolen the body – and now Batman will stop at nothing to reclaim him. Don’t miss these stories from BATMAN AND ROBIN #29-34 and ROBIN RISES: OMEGA #1!

BATMAN: DETECTIVE COMICS VOL. 5: GOTHTOPIA TP
Written by JOHN LAYMAN, BRAD MELTZER, GREGG HURWITZ, PETER J. TOMASI, FRANCESCO FRANCAVILLA, MIKE W. BARR, SCOTT SNYDER and others
Art by JASON FABOK, AARON LOPRESTI, ART THIBERT, BRYAN HITCH, NEAL ADAMS, IAN BERTRAM, FRANCESCO FRANCAVILLA, GUILLEM MARCH, SEAN MURPHY and others
Cover by JASON FABOK
On sale MAY 20 • 208 pg, FC, $16.99 US
Who – or what – created this twisted vision of the Dark Knight’s hometown? As far as anyone knows, Gotham City is and always has been a crime-free utopia, patrolled by the white-clad Batman and his sidekick Selina Kyle, a.k.a. Catbird. Don’t miss the strange adventure from DETECTIVE COMICS #25-29, including the amazing DETECTIVE COMICS #27!

BATGIRL VOL. 5: DEADLINE TP
Written by GAIL SIMONE and MARGUERITE BENNETT
Art by ROBERT GILL, FERNANDO PASARIN and JONATHAN GLAPION
Cover by ALEX GARNER
On sale MAY 27 • 256 pg, FC, $17.99 US
It’s a hazardous reunion between Batgirl and the former Court of Owls assassin Strix as they face off against the lethal new threat known as Silver – the man who knows the secret of Gotham City’s conspiracy of bats! Collects BATGIRL #27-34, ANNUAL #2 and BATGIRL: FUTURES END #1.

BATMAN/SUPERMAN VOL. 2: GAME OVER TP
Written by GREG PAK and PAUL LEVITZ
Art by BRETT BOOTH, NORM RAPMUND, JAE LEE, KENNETH ROCAFORT, PHILIP TAN, R.B. SILVA and others
Cover by JAE LEE
On sale MAY 6 • 224 pg, FC, $16.99 US
Issues #5-9 of the hit series are collected, along with BATMAN/SUPERMAN ANNUAL #1 and WORLDS’ FINEST #20-21 – the “First Contact” crossover epic! The Dark Knight and the Man of Steel uncover the Toymaster’s plot to create a secret, potentially deadly element in his new video game that brings to life characters created by players. And these new beings have only one goal: To kill Batman. Guest-starring the Worlds’ Finest duo of Power Girl and Huntress.

EARTH 2: WORLD’S END VOL. 1 TP
Written by DANIEL H. WILSON, MARGUERITE BENNETT and MIKE JOHNSON
Art by various
Cover by ARDIAN SYAF and JAIME MENDOZA
On sale MAY 13 • 272 pg, FC, $29.99 US
The first volume collecting issues #1-11 of the hit weekly series delves into the world of Earth-2 – a world that saw its greatest heroes die and new ones take their place. A world where Superman became its greatest villain, and a man named Zod seeks to save it, along with Batman, Green Lantern, The Flash and other heroes. A world they can only save from the forces of Apokolips through great personal sacrifice!

FOREVER EVIL TP
Written by GEOFF JOHNS
Art and cover by DAVID FINCH and RICHARD FRIEND
On sale MAY 13 • 240 pg, FC, $19.99 US
The Justice League is dead! And the villains shall inherit the Earth! In this new title collecting the seven-issue miniseries FOREVER EVIL, the Crime Syndicate takes over the DC Universe, and no one can stand in the way of them and their quest for complete world domination – no one except Lex Luthor!

BATMAN: ARKHAM KNIGHT VOL. 1 TP
Written by PETER J. TOMASI
Art by PHILIP TAN, DALE EAGLESHAM, BERNARD CHANG, MARTIN COCCOLO and others
Cover by DAN PANOSIAN
On sale MAY 27 • 144 pg, FC, $14.99 US
Collecting the first four issues of the new series that’s an in-continuity prequel comic set prior to the events of the brand-new video game Batman: Arkham Knight! The Joker is dead. Arkham City is closed. As a new day begins, Bruce Wayne finds himself in devastating pain, recovering from his injuries and questioning whether his role as Batman is still necessary to the city’s survival. But can even death keep The Joker from tormenting the Dark Knight?

BATMAN: LEGENDS OF THE DARK KNIGHT VOL. 4 TP
Written by JOSHUA WILLIAMSON, CHARLES SOULE, JIM KRUEGER, MIKE W. BARR and others
Art by WES CRAIG, DENNIS CALERO, DEXTER SOY, TOM RANEY and others
Cover by DAVID WILLIAMS
On sale MAY 27 • 200 pg, FC, $16.99 US
n these stories from LEGENDS OF THE DARK KNIGHT 100-PAGE SUPER SPECTACULAR #2-3, Batman battles The Riddler and Clayface. Plus, young Bruce Wayne discovers a cave that will affect his entire life.