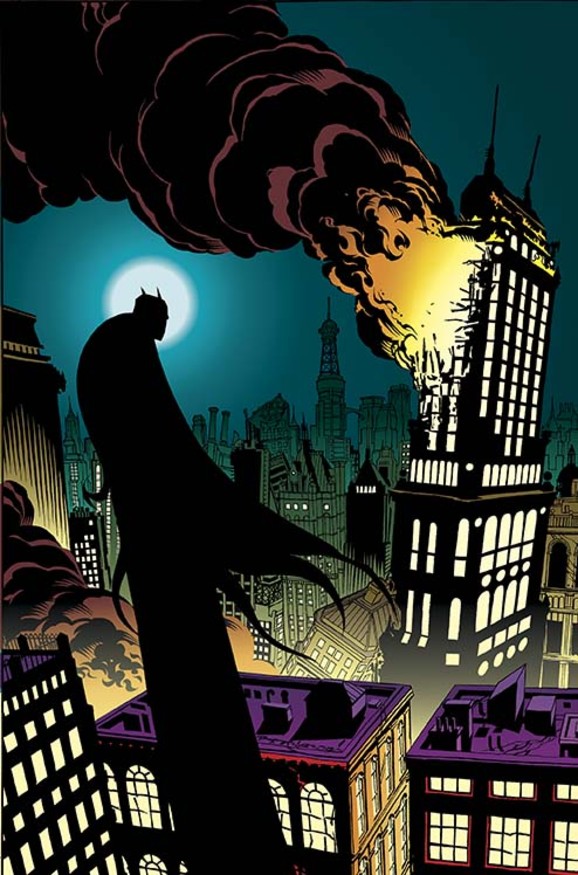 DC has released some advanced solicitations for Batman-related graphic novels and trade releases that will be available throughout the months of June and July of 2015.  Several of these are for collected editions of current and former New 52 ongoing titles (including Batman & Robin Vol. 5, Gotham Academy Vol. 1, Grayson Vol. 1, Red Hood and the Outlaws Vol. 6, and Justice League Vol. 6) in addition to other collected editions from either outside the New 52 line or from comics that predate the New 52.  Some of these include a trade paperback of the graphic novel Black Canary and Zatanna: Bloodspell, a new trade paperback of Batman: Cataclysm including some material that has never before been collected, and a trade paperback of Vol. 2 of Chuck Dixon’s run on Nightwing.  Other solicitations worthy of special note include a deluxe edition of Batman: Gothic from the pages of Batman: Legends of the Dark Knight, and a hardcover title Legends of the Dark Knight: Norm Breyfogle which will feature a few Batman Annuals and several issues of Detective Comics all of which feature the art of Norm Breyfogle.

BLACK CANARY AND ZATANNA: BLOODSPELL TP
Written by PAUL DINI
Art and cover by JOE QUINONES
On sale JUNE 17 • 144 pg, FC, $14.99 US
Two of the DC Universe’s brightest stars join forces in this original graphic novel, now in trade paperback!
A year ago, Black Canary infiltrated a gang of female criminals set to pull a dangerous heist at a Las Vegas casino. Its leader was skilled in hand-to-hand combat and had more than a passing interest in black magic. Rather than be captured by Canary or the law, she went to her death, vowing to get revenge on Canary! Now, one year later, death stalks those gang members, and Canary must turn to her friend Zatanna to help investigate.
This title also includes a special sketchbook section.

BATMAN AND ROBIN VOL. 5: THE BIG BURN TP
Written by PETER J. TOMASI
Art by PATRICK GLEASON, GUILLEM MARCH, MICK GRAY and others
Cover by PATRICK GLEASON
On sale JUNE 24 • 176 pg, FC, $16.99 US
The origin of Two-Face begins as Batman finds himself in the crossfire of a war between Two-Face and mobster Erin McKillen! Don’t miss these explosive tales from BATMAN AND TWO-FACE #24-28 and BATMAN AND ROBIN ANNUAL #2.

GOTHAM ACADEMY VOL. 1 TP
Written by BECKY CLOONAN and BRENDEN FLETCHER
Art and cover by KARL KERSCHL
On sale JUNE 17 • 144 pg, FC, $14.99 US
Gotham City’s most prestigious prep school is a very strange place. It’s got a spooky campus, oddball teachers, and rich benefactors always dropping by…like that weirdo Bruce Wayne. But nothing is as strange as the students! Like, what’s up with Olive Silverlock? Is she crazy or what? Where did she go last summer? And what’s the deal with her creepy mom? And how come that freshman Maps is always following her around? And is she still going out with Kyle? P.S. Did you hear the rumor about the ghost in the North Hall?! It’s all here in these tales from issues #1-6 of the new series!

GRAYSON VOL. 1: AGENTS OF SPYRAL HC
Written by TIM SEELEY and TOM KING
Art by MIKEL JANIN and STEPHEN MOONEY
Cover by ANDREW ROBINSON
On sale JUNE 3 • 160 pg, FC, $22.99 US
A thrilling new chapter of Dick Grayson’s life begins in this title collecting the start of his new hit series. It’s a super-spy thriller that will shock you and prove one thing: You may think you know Nightwing – but you don’t know Dick! As he digs into the mysterious organization known as SPYRAL and learns more about his new partner, Helena Bertinelli, how can Dick keep track of all the lies? Or will he fall apart once he can no longer tell fact from fiction? Plus: Dick Grayson goes toe-to-toe with the Midnighter! Collects GRAYSON #1-4, a story from SECRET ORIGINS #7 and GRAYSON: FUTRUES END #1.

JUSTICE LEAGUE VOL. 6: INJUSTICE LEAGUE HC
Written by GEOFF JOHNS
Art by IVAN REIS, DOUG MAHNKE, SCOTT KOLINS, JASON FABOK and others
Cover by IVAN REIS and JOE PRADO
On sale JULY 8 • 256 pg, FC, $24.99 US
In these tales from issues #30-39, heroes quit, villains join and a Justice League roster you’ve never seen before emerges, led by the world’s greatest hero – Lex Luthor?! The violent consequences of FOREVER EVIL must be dealt with as a new and deadly force targets the Justice league. And who knows how the new Power Ring will affect the team? Plus: The Chief and the treacherous Doom Patrol join The New 52 – and they’re out to show the world that their leader is Luthor’s superior in every way!

BATMAN: GOTHIC DELUXE EDITION HC
Written by GRANT MORRISON
Art and cover by KLAUS JANSON
On sale JULY 22 • 144 pg, FC, 7.0625” x 10.875”, $24.99 US
In this epic from BATMAN: LEGENDS OF THE DARK KNIGHT #6-10, published here for the first time in hardcover, the Dark Knight Detective must defeat an immortal killer while dealing with a terrifying horror from Bruce Wayne’s youth. While plagued by nightmares about his childhood, Batman investigates the murders of crime bosses in Gotham City. But what will he do when he discovers that the macabre killer is actually the headmaster who tormented Bruce Wayne as a boy?

NIGHTWING VOL. 2: ROUGH JUSTICE TP
Written by CHUCK DIXON
Art and cover by SCOTT McDANIEL and KARL STORY
On sale JUNE 10 • 296 pg, FC, $19.99 US
In these stories from NIGHTWING #9-18 and NIGHTWING ANNUAL #1, Dick Grayson battles Blockbuster, Man-Bat, and the lethal assassin Deathstroke. But neither distance nor time will allow him to escape his past, as Nightwing finds himself once again battling the fear-inducing Scarecrow and working side-by-side with Batman when his mentor pays him an unwelcome visit to check up on him.

LEGENDS OF THE DARK KNIGHT: NORM BREYFOGLE HC
Written by JOHN WAGNER, ALAN GRANT and others
Art by NORM BREYFOGLE and others
Cover by NORM BREYFOGLE
On sale JULY 1 • 520 pg, FC, $49.99 US
In these tales from BATMAN ANNUAL #11-12 and DETECTIVE COMICS #579, 582-594 and 601-607, all featuring the art of Norm Breyfogle, the Dark Knight faces the evil of the Ventriloquist and Scarface, the Crime Doctor, the Demon, a horde of Clayfaces and more!