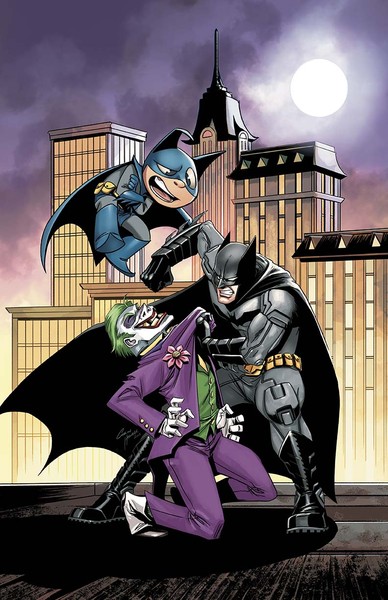 Today, DC has announced the lineup of the second week of eight-page stories, and the “Convergence” issues where they’ll appear. Each will debut on May 13th. Here’s the information, direct from DC, along with short descriptions of each story.  Here are some from this second week that may be of interest to TBU fans.

BAT-MITE (Written by Dan Jurgens with Art by Corin Howell)
in CONVERGENCE: SUPERGIRL: MATRIX #2
The Dark Knight has a new partner — whether he wants one or not! Bat-Mite arrives at the scene of a Gotham robbery with the goal of helping Batman be a better crime fighter and spreading his “sound advice” all over the DC Universe.

GOTHAM BY MIDNIGHT (Written by Ray Fawkes with Art by Juan Ferreyra)
in CONVERGENCE: CATWOMAN #2
It’s an all-new Gotham, but Batman still needs the help of the Midnight Shift.  A typical assignment comes through.

JUSTICE LEAGUE 3001 (Written by Keith Giffen with Art by Howard Porter)
in CONVERGENCE: JUSTICE LEAGUE INTERNATIONAL #2
It’s one year later for the Justice League. Superman and Teri, aka the Flash, are finally having their first date – it’s a good thing Batman and Ariel decided to tag along. What could possibly go wrong?  Maybe the appearance of a sexy new female Leaguer named – wait a minute, this can’t be right – GUY GARDNER?!