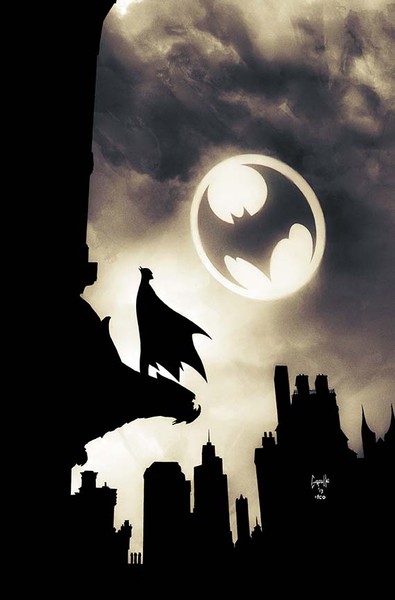 DC has released some advanced solicitations for Batman-related graphic novels and trade releases that will be available throughout the months of September and October of 2015.  Several of these are for collected editions of current and former New 52 ongoing titles (Batman Vol. 6 and Futures End Vol. 3) as well as other collected editions from either outside the New 52 line or from comics that predate the New 52 (The New Teen Titans Vol. 3,  Batman Beyond 2.0 Vol. 3 and Suicide Squad Vol. 1).

Volume 6 of the current ongoing Batman title collects some odds and ends not collected in other places from BATMAN #0, 18-20, 28 and 34, plus BATMAN ANNUAL #2.  These solicitations also include a HC collected edition of the Multiversity Event as well as a deluxe HC edition of Crisis on Infinite Earths in recognition of the it’s 30th Anniversary.  Lastly, these advanced solicits preview a deluxe hardcover of the Batman Year 100 miniseries by Paul Pope as well as a special HC title called Graphic Ink: The DC Comics Art of Darwyn Cooke featuring work by the writer/artist from Batman: Gotham Knights and various other DC titles.

BATMAN YEAR ONE HC BOOK AND DVD/BLU-RAY SET
Written by FRANK MILLER
Art and cover by
DAVID MAZZUCCHELLI
On sale TUESDAY SEPTEMBER 1
144 pg, FC • $26.99 US
One of the most important and critically acclaimed Batman adventures ever! In addition to telling the entire dramatic story of Batman’s first year fighting crime, this collection includes loads of reproductions of original pencils, script pages, promotional art, unseen Mazzucchelli Batman art and more! Accompanied with the book is the hit BATMAN: YEAR ONE animated movie on Blu-Ray and DVD discs. Read the book, watch the movie!

JUSTICE LEAGUE ORIGIN HC BOOK AND DVD/BLU-RAY SET
Written by GEOFF JOHNS
Art by JIM LEE, SCOTT WILLIAMS and others
Cover by JIM LEE and SCOTT WILLIAMS
On sale TUESDAY SEPTEMBER 1
192 pg, FC • $26.99 US
In a universe where super heroes are strange and new, Batman has discovered a dark evil that requires him to unite the World’s Greatest Heroes! Superman, Batman, Wonder Woman, Green Lantern, Aquaman, The Flash and Cyborg unite for the first time to form the JUSTICE LEAGUE in these stories from issues #1-5 of the smash-hit series! Included with this volume is the animated movie JUSTICE LEAGUE: WAR on Blu-Ray and DVD discs, bringing Geoff Johns and Jim Lee’s epic story to the screen. Read the book, watch the movie!

JLA EARTH 2 HC BOOK AND DVD/BLU-RAY SET
Written by GRANT MORRISON • Art and cover by FRANK QUITELY
On sale TUESDAY SEPTEMBER 1 • 144 pg, FC, $26.99 US
Nothing has ever threatened the Crime Syndicate of Amerika proudly enforce—until a twisted mirror image of the CSA arrives from the flipside of reality! Accompanying this original graphic novel is JUSTICE LEAGUE: CRISIS ON TWO EARTHS, the animated movie inspired by the book on Blu-Ray and DVD discs. Read the book, watch the movie!

DC COMICS BOOK AND DVD/BLU-RAY SLIPCASE SET
On sale TUESDAY SEPTEMBER 1 • $145.99 US
All six book-and-animated movie sets are also available in this amazing slipcase set! Each includes a hardcover book plus the animated movie inspired by the book in both Blu-Ray and DVD formats on two discs! This set includes:
• BATMAN BLACK AND WHITE
• THE DEATH OF SUPERMAN
• BATMAN YEAR ONE
• JUSTICE LEAGUE ORIGIN
• JLA EARTH 2
• WONDER WOMAN: GODS AND MORTALS

BATMAN VOL. 6: GRAVEYARD SHIFT TP
Written by SCOTT SNYDER, MARGUERITE BENNETT and JAMES TYNION IV
Art by GREG CAPULLO, DANNY MIKI, ANDY KUBERT, DUSTIN NGUYEN, DEREK FRIDOLFS, ALEX MALEEV and others
Cover by GREG CAPULLO
On sale SEPTEMBER 30 • 224 pg, FC, $16.99 US
In these tales from BATMAN #0, 18-20, 28 and 34, plus BATMAN ANNUAL #2, look back to the early days of the Dark Knight, then see the impact of the death of his son, Damian! Plus, has Batman’s worst foe become…Bruce Wayne? This title also includes three pivotal chapters from the epic ZERO YEAR storyline, and a chapter that ties into BATMAN ETERNAL!

THE NEW 52: FUTURES END VOL. 3 TP
Written by BRIAN AZZARELLO, KEITH GIFFEN, DAN JURGENS and JEFF LEMIRE
Art by various
Cover by RYAN SOOK
On sale SEPTEMBER 9 • 408 pg, FC, $29.99 US
In this final volume of the hit weekly series, Brainiac has arrived from the stars, and he intends to take New York City with him as a souvenir. Superman, Batman Beyond, Firestorm, Stormwatch, and the Justice League Dark must band together stop Brainiac and Brother Eye from destroying the future. Collects THE NEW 52: FUTURES END #31-48.

SUICIDE SQUAD VOL. 1: TRIAL BY FIRE TP
Written by JOHN OSTRANDER
Art by LUKE McDONNELL, KARL KESEL and BOB LEWIS
Cover by JERRY BINGHAM
On sale SEPTEMBER 2 • 232 pg, FC, $19.99 US
In these stories from SUICIDE SQUAD #1-8 and SECRET ORIGINS #14, the team must take down the evil Jihad before it can attack the U.S. Then, the Squad is sent into Russia to extract a famous dissident—but can they get out alive?

BATMAN YEAR 100 DELUXE EDITION HC
Written by PAUL POPE
Art and cover by PAUL POPE
On sale OCTOBER 14 • 240 pg, FC, 7.0625” x 10.875”, $29.99 US
Visionary writer/artist Paul Pope presents a futuristic mystery of epic proportions! In Gotham City, 2039, a federal agent is murdered, and a contingent of Washington’s top agents is hot on the trail of the Batman, long thought gone, but now the suspect in the murder. This new collection of the 4-issue miniseries includes never before published sketch material!

BATMAN BEYOND 2.0 VOL. 3: MARKED SOUL TP
Written by KYLE HIGGINS and ALEC SIEGEL
Art by PHIL HESTER, CRAIG ROUSSEAU, THONY SILAS and others
Cover by THONY SILAS
On sale SEPTEMBER 9 • 176 pg, FC, $16.99 US
Superstar artist Phil Hester (GREEN ARROW) joins the team for a new storyline, and the answers to the big questions of what really happened between Bruce Wayne and Terry McGinnis start to be revealed here! BATMAN BEYOND 2.0 VOL. 3: MARKED SOUL collects print issues #13-16.

GRAPHIC INK: THE DC COMICS ART OF DARWYN COOKE HC
Written by DARWYN COOKE and others
Art by DARWYN COOK and others
Cover by DARWYN COOKE
On sale OCTOBER 14 • 400 pg, FC, 8.625” x 11.625”, $39.99 US
This beautiful book features the distinctive style of Eisner Award-winning writer/artist Darwyn Cooke, dating back to 1985’s TALENT SHOWCASE #19, and stories from BATMAN: GOTHAM KNIGHTS, LEGION WORLDS, JSA ALL STARS, JONAH HEX and more, plus dozens of covers!

THE NEW TEEN TITANS VOL. 3 TP
Written by MARV WOLFMAN and GEORGE PEREZ
Art by GEORGE PEREZ, ROMEO TANGHAL and others
Cover by GEORGE PEREZ
On sale SEPTEMBER 16 • 224 pg, FC, $19.99 US
In these NEW TITANS tales from issues #17-20 and TALES OF THE NEW TEEN TITANS #1-4, a childhood friend of Kid Flash is in trouble, and the Titans join together to help her. And, after a battle that almost destroys the Titans’ Tower, it becomes clear that there is someone very powerful at work behind the scenes.

CRISIS ON INFINITE EARTHS DELUXE EDITION HC
Written by MARV WOLFMAN
Art by GEORGE PEREZ, DICK GIORDANO, JERRY ORDWAY and others
Cover by GEORGE PEREZ
On sale OCTOBER 7 • 400 pg, FC, 7.0625” x 10.875”, $49.99 US
The 12-issue epic is collected in a deluxe hardcover! The mysterious Anti-Monitor has begun a crusade to end all existence. As alternate Earths are destroyed, the Monitor quickly assembles a team of heroes from across time and space to stop the menace!