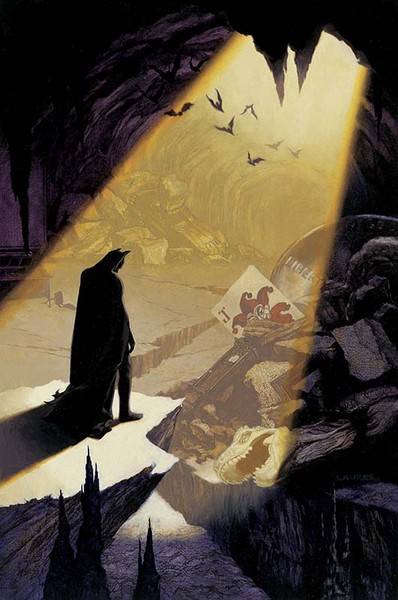 DC has released some advanced solicitations for Batman-related graphic novels and trade releases that will be available throughout the months of October and November of 2015.  Several of these are for collected editions of current and former New 52 ongoing titles (Batman & Robin Vol. 7 HC and Earth 2 Vol. 6 HC, ) as well as other collected editions from either outside the New 52 line or from comics that predate the New 52 (Batman Adventures Vol. 3 TPB, Birds of Prey Vol. 1, TPB, Injustice God’s Among Us Year Two Vol. 2 TPB).  These solicitations also include collected editions of all of the Convergence event titles including the 9-issue main series and all of the 2-issue titles as well, with various TBU Convergence titles being included alongside other Convergence titles.

Also, worthy of note to TBU fans are a new TPB edition of Teen Titans Earth One and new TPB collections of Batman: The Road to No Man’s Land Vol. 1 and Batman: War Games Vol. 1.  Also included in these solicitations are Batman: Arkham – Two Face collecting the greatest Two Face stories from various titles (DETECTIVE COMICS #66, 68, 80, and 513, BATMAN #234, 346, 410 and 411, WORLD’S FINEST COMICS #173, BATMAN: TWO-FACE #1, BATMAN: THE LONG HALLOWEEN #11, BATMAN CHRONICLES #8, THE JOKER’S ASYLUM: TWO-FACE #1 and BATMAN AND ROBIN #23.1: TWO-FACE.) and Catwoman: A Celebration of 75 Years a collection of the best stories of Selina Kyle in celebration of her 75th anniversary.

Lastly, for $75.00, TBU fans can own the new Batman: The Golden Age Omnibus which is billed as collecting all of the original stories which created and defined the Batman mythos including DETECTIVE COMICS #27-56 and BATMAN #1-7 which contain the origin of the Dark Knight, as well as the debuts of Robin, Commissioner Gordon, Professor Hugo Strange, The Joker, Catwoman and more.  The full list of advanced solicitations for TBU October and November 2015 can be found below.

CONVERGENCE HC
Written by JEFF KING, SCOTT LOBDELL and DAN JURGENS
Art by ETHAN VAN SCIVER, CARLO PAGULAYAN, STEPHEN SEGOVIA, ANDY KUBERT, AARON LOPRESTI and others
Cover by ETHAN VAN SCIVER
On sale OCTOBER 7 • 320 pg, FC, $29.99 US
Where do worlds go when they die? The earthquakes felt round the Multiverse, Superman’s lost days after “Doomed,” the world’s end—all these points will converge as the history of the DC Universe is spun from the perspective of a mad god and his arrogant child. The biggest story in DC history ties into literally every DC story ever told—and it all begins here. Kingdom Come, Red Son, Wild West Justice League, Captain Carrot and the Zoo Crew—all the worlds of the DC Universe can still be found on Telos. This new mega-event from the issues #0-8 of the CONVERGENCE weekly series brings together heroes and villains from DC Comics’ history.

CONVERGENCE: CRISIS BOOK ONE TP
Written by MARC ANDREYKO, MARV WOLFMAN, DAVID GALLAHER, JEFF PARKER and STUART MOORE
Art by CARLOS D’ANDA, ROBERTO VIACAVA, STEVE ELLIS, TIM TRUMAN, GUS STORMS and others
Cover by TBD
On sale OCTOBER 14 • 240 pg, FC, $19.99 US
This CONVERGENCE collection stars the Outsiders, the Legion of Super-Heroes, Hawkman and many more, as they fight in a gladiator-style competition to see which worlds will live…and which will perish! This book spells out the final fates of some of DC’s most popular heroes. Collects CONVERGENCE: BATMAN AND THE OUTSIDERS #1-2, CONVERGENCE: ADVENTURES OF SUPERMAN #1-2, CONVERGENCE: GREEN LANTERN CORPS #1-2, CONVERGENCE: SUPERBOY AND THE LEGION OF SUPER-HEROES #1-2 and CONVERGENCE: HAWKMAN #1-2.

TEEN TITANS EARTH ONE TP
Written by JEFF LEMIRE
Art by TERRY DODSON, RACHEL DODSON and CAM SMITH
Cover by TERRY DODSON and RACHEL DODSON
On sale OCTOBER 21 • 144 pg, FC, $14.99 US
The acclaimed original graphic novel is now in trade paperback! The young heroes of the Teen Titans never felt like normal kids…but they had no idea how right they were. Their seemingly idyllic Oregon upbringing hides a secret—one that will bring killers, shamans and extraterrestrials down on their heads, and force them into an alliance that could shake the planet to its foundations!

BATMAN: THE ROAD TO NO MAN’S LAND VOL. 1 TP
Written by DENNIS O’NEIL, ALAN GRANT and CHUCK DIXON
Art by ROGER ROBINSON, MARK BUCKINGHAM, JIM APARO and others
Cover by GLEN ORBIK
On sale OCTOBER 7 • 424 pg, FC, $29.99 US
After a cataclysmic earthquake, those who refuse to vacate Gotham City live amid a citywide turf war. Collects BATMAN #555-559, BATMAN: SHADOW OF THE BAT #75-79, DETECTIVE COMICS #722-726, ROBIN #54 and THE BATMAN CHRONICLES #14.

CATWOMAN: A CELEBRATION OF 75 YEARS HC
Written by BILL FINGER, ED BRUBAKER, DENNIS O’NEIL and others
Art by BOB KANE, DARWYN COOKE and others
Cover by ADAM HUGHES
On sale NOVEMBER 18 • 400 pg, FC, $39.99 US
Selina Kyle gets her due in this new collection celebrating her 75 year history! Don’t miss the stories that made Catwoman one of Batman’s greatest foes—and one of comics’ most memorable villains!

BATMAN AND ROBIN VOL. 7: ROBIN RISES HC
Written by PETER J. TOMASI
Art by PATRICK GLEASON, MICK GRAY, ANDY KUBERT, JONATHAN GLAPION, IAN BERTRAM and JUAN JOSE RYP
Cover by PATRICK GLEASON
On sale NOVEMBER 18 • 240 pg, FC, $24.99 US
After his son Robin’s body is stolen by alien hordes, Batman finds himself on the deadly planet of Apokolips—home planet of Darkseid! Aided by his allies Red Hood, Batgirl and Red Robin, Bruce Wayne must face down the most powerful villains in the universe to recover his son’s coffin—a son who he’d do anything to bring back. Collects BATMAN AND ROBIN #35-40, ROBIN RISES: ALPHA #1, BATMAN AND ROBIN ANNUAL #3, BATMAN AND ROBIN: FUTURES END #1, and a story from SECRET ORIGINS #4.

BATMAN: THE GOLDEN AGE OMNIBUS HC
Written by BILL FINGER, GARDNER FOX and others
Art by BOB KANE, JERRY ROBINSON and others
Cover by DARWYN COOKE
On sale NOVEMBER 4 • 784 pg, FC, $75.00 US
The stories that catapulted Batman to legendary status are collected here in a single, massive volume. These original stories from DETECTIVE COMICS #27-56 and BATMAN #1-7 include the origin of the Dark Knight, as well as the debuts of Robin, Commissioner Gordon, Professor Hugo Strange, The Joker, Catwoman and more!

EARTH 2 VOL. 6: COLLISION HC
Written by MARGUERITE BENNETT, MIKE JOHNSON, DANIEL WILSON and TOM TAYLOR
Art by various
Cover by YILDIRAY CINAR
On sale NOVEMBER 25 • 144 pg, FC, $22.99 US
The heroes of Earth-2 are faced with the end of their world as the forces of Apokolips invade! Millions are displaced in a crumbling world as The Flash, Hawkgirl, Green Lantern and the World Army struggles to stem the tide of destruction. But will their combined might be enough? Collects EARTH 2 #27-32.

INJUSTICE: GODS AMONG US YEAR TWO VOL. 2 TP
Written by TOM TAYLOR
Art by BRUNO REDONDO, MIKE S. MILLER, TOM DERENICK and others
Cover by JHEREMY RAAPACK
On sale OCTOBER 28 • 176 pg, FC, $16.99 US
In these stories from issues #7-12 and YEAR TWO ANNUAL #1, the war between Superman’s forces and the Green Lantern Corps reaches its climax. Hard choices are made, and more casualties are taken!