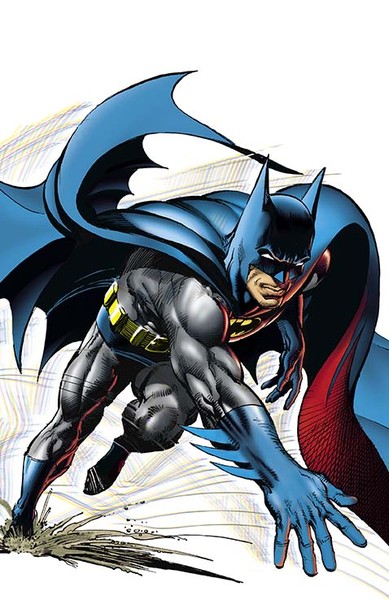 DC has released some advanced solicitations for Batman-related graphic novels and trade releases that will be available throughout the months of November and December of 2015.  Several of these are for collected editions of current and former New 52 ongoing titles (Batman Eternal Vol. 3, Batman and Robin Vol. 6, Earth 2 Vol. 5, Batman/Superman Vol. 4, and Harley Quinn Vol. 3) as well as other collected editions from either outside the New 52 line or from comics that predate the New 52 (Batman ’66 Vol. 4, Batman ’66 Meets the Green Hornet, Batman: Legends of the Dark Knight Vol. 5, and Injustice: Gods Among Us Year Three Vol. 1).

Apart from these new ongoing title collected editions, the only other solicitation of note for TBU fans is a new omnibus collecting Neal Adams’s entire run on Batman featuring comics from Batman, The Brave and the Bold, Detective Comics, World’s Finest, Batman: Odyssey, Batman: Black and White, along with many covers that Adams worked on as well.  Fans of Neal Adams’s work with the Dark Knight can own Batman Illustrated by Neal Adams Omnibus HC for $75.00 in early December.

BATMAN ’66 MEETS THE GREEN HORNET TP
Written by KEVIN SMITH and RALPH GARMAN
Art by TY TEMPLETON
Cover by ALEX ROSS
On sale NOVEMBER 25 • 144 pg, FC, $14.99 US
Superstar filmmaker Kevin Smith and actor/comedian Ralph Garman reunite Batman, The Green Hornet, Robin and Kato! But what could force these rivals to join forces? How about the deadly team of General Gumm and The Joker! Don’t miss this title collecting the 6-issue miniseries.
Co-published with Dynamite.

BATMAN ETERNAL VOL. 3 TP
Written by SCOTT SNYDER, JAMES TYNION IV, RAY FAWKES, KYLE HIGGINS and TIM SEELEY
Art by FERNANDO BLANCO, ANDREA MUTTI, JOE QUINONES and others
Cover by CLIFF CHIANG
On sale OCTOBER 7 • 448 pg, FC, $39.99 US
The third act of BATMAN ETERNAL begins as the GCPD have done the impossible: They’ve beaten Batman! Meanwhile, the rogues of Gotham City unite under a mysterious foe that even the Riddler is terrified of. The epic finale of the critically acclaimed series roars to its conclusion in these tales from issues #35-52 and BATMAN #28.

BATMAN AND ROBIN VOL. 6: THE HUNT FOR ROBIN TP
Written by PETER J. TOMASI
Art by ANDY KUBERT, PATRICK GLEASON and MICK GRAY
Cover by ANDY KUBERT
On sale NOVEMBER 18 • 192 pg, FC, $16.99 US
Batman has finally accepted the death of his son—but Damian’s grandfather, Ra’s al Ghul, has not! In order to resurrect Robin, he’s stolen the body—and now Batman will stop at nothing to reclaim him! Collects BATMAN AND ROBIN #29-34 and ROBIN RISES: OMEGA #1!

BATMAN: LEGENDS OF THE DARK KNIGHT VOL. 5 TP
Written by MARC GUGGENHEIM, AARON LOPRESTI, and others
Art by SCOTT KOLINS, WADE VON GRAWBADGER, CULLY HAMNER, and others
Cover by CULLY HAMNER
On sale NOVEMBER 4 • 200 pg, FC, $16.99 US
In these stories from LEGENDS OF THE DARK KNIGHT 100-PAGE SUPER SPECTACULAR #4-5, there’s a new face fighting crime in Gotham City, but will he do more harm than good? Plus, a serial killer targets random citizens for a fiery death, and when the Dark Knight foils The Riddler’s latest plot, Dr. Chase Meridian proves that Edward Nigma is not clinically insane!

EARTH 2 VOL. 5: THE KRYPTONIAN TP
Written by TOM TAYLOR and DANIEL H. WILSON
Art by NICOLA SCOTT, TREVOR SCOTT and others
Cover by J.G. JONES
On sale NOVEMBER 25 • 176 pg, FC, $16.99 US
A new super-being named Val-Zod has appeared—and the heroes of Earth-2 must convince him to help them in one last, desperate attempt to stop Kal-El. Can they band together in time to prepare for Apokolips and the forces of Darkseid? And can Val-Zod become the hero they need him to be? Collects EARTH 2 #21-26 and EARTH 2: FUTURES END #1!

INJUSTICE: GODS AMONG US YEAR THREE VOL. 1 HC
Written by TOM TAYLOR
Art by MIKE S. MILLER, BRUNO REDONDO and others
Cover by NEIL GOOGE
On sale OCTOBER 28 • 160 pg, FC, $22.99 US
The war is over, but it claimed a civilian victim whose death John Constantine will not let go unavenged. Joining forces with Batman, Constantine unites a team of magical beings, super heroes, and ordinary humans to finish off Superman. Collects issues #1-7 of the hit series!

BATMAN/SUPERMAN VOL. 4: SIEGE HC
Written by GREG PAK
Art by ARDIAN SYAF, JONATHAN GLAPION and others
Cover by ARDIAN SYAF and DANNY MIKI
On sale DECEMBER 16 • 200 pg, FC, $24.99 US
Who is Superman’s Joker? It seems it’s the unseen terror, who makes the battle personal for Superman by attacking all things related to the Man of Steel! Together, Batman and Superman start to track down suspects but the true identity of the villain will shock you! No one is safe when the one you’re hunting has no discernible motive or pattern! Collects BATMAN/SUPERMAN #16-20, ANNUAL #2 and BATMAN/SUPERMAN: FUTURES END #1.

HARLEY QUINN VOL. 3: KISS KISS BANG STAB HC
Written by AMANDA CONNER and JIMMY PALMIOTTI
Art by CHAD HARDIN, JOHN TIMMS, BEN CALDWELL, THONY SILAS, DARWYN COOKE, and others
Cover by AMANDA CONNER
On sale DECEMBER 9 • 200 pg, FC, $24.99 US
Harley was certain she could have it all. She could be the world’s best landlord, protect Coney Island from the scum of the Earth, woo Mason Macabre, work her day job as a psychiatrist, volunteer at the puppy shelter…but that’s a lot of spinning plates, and eventually they’re bound to start breaking! What happens when a psychopath cracks up? Is it possible for Harley to go even more insane?! Don’t miss this big helping of Harley from HARLEY QUINN #14-16, ANNUAL #1, VALENTINE’S DAY SPECIAL #1, and HOLIDAY SPECIAL #1!

BATMAN ILLUSTRATED BY NEAL ADAMS OMNIBUS HC
Written by BOB HANEY, DENNIS O’NEIL, NEAL ADAMS and others
Art by NEAL ADAMS, DICK GIORDANO and others
Cover by NEAL ADAMS
On sale DECEMBER 2 • 640 pg, FC, $75.00 US
At last, Neal Adams’ entire run on Batman is collected in one massive volume, with stories from the pages of BATMAN, THE BRAVE AND THE BOLD, DETECTIVE COMICS, WORLD’S FINEST, BATMAN: ODYSSEY, BATMAN: BLACK AND WHITE, and more, along with innumerable covers!