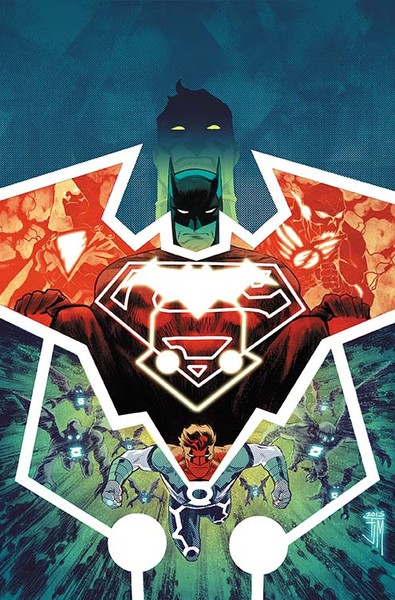 Other noteworthy titles for TBU fans include new coloring book editions of Batman: Hush and Batman Adventures: Mad Love where you can color the books yourself (note: the original colorists for the titles are not credited in these editions), a hardcover collection of the long-awaited and newly starting Batman: Europa, a new trade paperback edition of Batman: Contagion, a new $100 omnibus of Gotham Central, and a collection called World’s Funnest collecting stories of Bat-mite and his foe Mr. Mxyzptlk from  SUPERMAN AND BATMAN: WORLD’S FUNNEST #1, BATMAN: MITEFALL #1, WORLD’S FINEST #6, and DETECTIVE COMICS #267.

See the full list of advanced solicitations for collected editions below.

COLORING DC: BATMAN – HUSH VOL. 1 TP
Written by JEPH LOEB
Art and cover by JIM LEE and SCOTT WILLIAMS
On sale MARCH 2 • 104 pg, B&W, $15.99 US
DC Comics presents classic adventures in a whole new way: in black and white, on heavy stock suitable for coloring! This title collects the opening chapters of “Batman: Hush,” from BATMAN #608-611 and a story from Wizard #0, all featuring spectacular artwork by Jim Lee and Scott Williams!

BATMAN: EUROPA HC
Written by MATTEO CASALI and BRIAN AZZARELLO
Art by GIUSEPPE CAMUNCOLI, JIM LEE, DIEGO LATORRE and GERALD PAREL
Cover by JIM LEE
On sale APRIL 13 • 144 pg, FC, $22.99 US
The long-awaited 4-issue miniseries is collected in a new hardcover! The impossible has happened and Batman is on the verge of being taken down by an enemy he cannot defeat: a virus for which there is no cure! And the only hope for his salvation is
The Joker! Who infected Batman, what does the Clown Prince of Crime know, and how will the Dark Knight get that information? Together, the enemies crisscross Europe, desperate to find answers before time runs out.

BATMAN BEYOND VOL. 1: BRAVE NEW WORLDS TP
Written by DAN JURGENS
Art and cover by BERNARD CHANG
On sale MARCH 9 • 144 pg, FC, $14.99 US
In these stories from the first six issues of the new series plus the sneak peek story from CONVERGENCE: BATMAN AND THE OUTSIDERS #2, Batman’s gotten himself caught in a POW camp where the enemy refuses to give up trying to crack the only “data source” he can’t access—the human mind! And this foe doesn’t care how many people he has to burn through to get there, including original Batgirl, Barbara Gordon! To make his great escape, Batman will have to take down both his greatest hero and a traitor to humanity! Don’t miss these tales from a dark tomorrow!

BLACK CANARY VOL. 1: KICKING AND SCREAMING TP
Written by BRENDEN FLETCHER
Art by ANNIE WU and PIA GUERRA
Cover by ANNIE WU
On sale MARCH 2 • 168 pg, FC, $14.99 US
After years as a crimefighter, Dinah Lance never imagined herself as a singer…but now she’d die to protect her new band of misfits and trouble magnets! Collects issues #1-7 of the red-hot new series, plus the sneak peek story from CONVERGENCE: BLUE BEETLE #2.

EARTH 2: SOCIETY VOL. 1: PLANETFALL TP
Written by DANIEL H. WILSON
Art by JORGE JIMENEZ and ALISON BORGES
Cover by JORGE JIMENEZ
On sale MARCH 9 • 144 pg, FC, $14.99 US
In the wake of their devastating war with Apokolips, 12 ships of survivors have a chance to rebuild Earth-2 on a twin planet—but the fight isn’t over. How will Superman, Batman, Green Lantern, The Flash, Hawkgirl and their allies rebuild an all-new society? Find out in these stories from EARTH 2: SOCIETY #1-6, plus the eight-page sneak peek story from CONVERGENCE: JUSTICE LEAGUE #2!

RED HOOD/ARSENAL VOL. 1: OPEN FOR BUSINESS TP
Written by SCOTT LOBDELL
Art by DENIS MEDRI and PAOLO PANTALENA
Cover by HOWARD PORTER
On sale MARCH 30 • 144 pg, FC, $14.99 US
After working for the mysterious Tara Battleworth as on-staff outlaws, Red Hood and Arsenal are branching out as freelance problem solvers, investigators, and butt-kicking specialists. But can they overcome the evil of the organization known as Underbelly? Collects RED HOOD/ARSENAL #1-6, plus the sneak peek story from CONVERGENCE: TITANS #2!

DC COMICS BOMBSHELLS VOL. 1: ENLISTED TP
Written by MARGUERITE BENNETT
Art by MARGUERITE SAUVAGE, LAURA BRAGA, MING DOYLE and others
Cover by ANT LUCIA
On sale MARCH 2 • 200 pg, FC, $16.99 US
In these stories from issues #1-6 of the hit series, learn the story behind this alternate reality where the Second World War is fought by superpowered women on the front lines and behind the scenes! It all begins with the stories of Batwoman, Wonder Woman and Supergirl.

HARLEY QUINN AND POWER GIRL TP
Written by AMANDA CONNER and JIMMY PALMIOTTI
Art by STEPHANE ROUX
Cover by AMANDA CONNER
On sale MARCH 2 • 144 pg, FC, $14.99 US
It’s a cosmic adventure beyond your wildest imaginings: Power Girl and Harley Quinn, stranded in a forgotten dimension, on the homeworld of the amorous warlord Vartox! They’ll sacrifice anything they have to in order to get home…except their dignity! Kidding! That’ll be the first thing to go. Collecting the 6-issue miniseries!

WE ARE ROBIN VOL. 1: THE VIGILANTE BUSINESS TP
Written by LEE BERMEJO
Art by JORGE CORONA and KHARY RANDOLPH
Cover by LEE BERMEJO
On sale MARCH 30 • 160 pg, FC, $14.99 US
The teenagers of Gotham City have adopted the “R” and made it their own. A new Robin? No, hundreds of new Robins! The Boy Wonder has inspired a movement in Gotham, where different people of all creeds, colors, genders and religions have donned the “R” insignia to combat crime. But will this clean up the city…or make more trouble for everyone? Collecting WE ARE ROBIN #1-6 and the sneak peek story from CONVERGENCE: NEW TEEN TITANS #2!

JUSTICE LEAGUE: DARKSEID WAR – POWER OF THE GODS HC
Written by PETER J. TOMASI, FRANCIS MANAPUL and others
Art by FERNANDO PASARIN, FRANCIS MANAPUL, SCOTT KOLINS and others
Cover by FRANCIS MANAPUL
On sale APRIL 20 • 200 pg, FC, $29.99 US
The world’s greatest heroes have gained the powers of the New Gods—but how will they handle them? And how will this affect the winds of war? Find out in these stories from the JUSTICE LEAGUE: DARKSEID WAR one-shots starring Batman, The Flash,  Green Lantern, Superman, Lex Luthor and Shazam!

JUSTICE LEAGUE VOL. 6: INJUSTICE LEAGUE TP
Written by GEOFF JOHNS
Art by IVAN REIS, DOUG MAHNKE, SCOTT KOLINS, JASON FABOK and others
Cover by JASON FABOK
On sale MARCH 9 • 256 pg, FC, $19.99 US
In these tales from issues #30-39, a new roster led by Lex Luthor makes its debut, while the consequences of FOREVER EVIL must be dealt with. Plus: The Chief and the Doom Patrol are out to show the world that their leader is Luthor’s superior in every way!

BATMAN VOL. 7: ENDGAME TP
Written by SCOTT SNYDER
Art and cover by GREG CAPULLO and DANNY MIKI
On sale MARCH 16 • 200 pg, FC, $17.99 US
The Joker is back in these stories from BATMAN #35-40! For years, The Joker has regarded Batman with a sick, twisted love. But now, he’s out to kill Batman! The Joker returns to Gotham City with a deadlier agenda than ever before, using every tool at his disposal to finally kill the Dark Knight. That includes turning Batman’s allies against him in the bloodiest brawl that he’s ever had to survive.

GOTHAM ACADEMY VOL. 2: CALAMITY TP
Written by BECKY CLOONAN and BRENDEN FLETCHER
Art by KARL KERSCHL, MINGJUE HELEN CHEN and others
Cover by KARL KERSCHL
On sale MARCH 16 • 144 pg, FC, $14.99 US
Olive has received information that her mother might be alive—and now, she and her friends must investigate! Of course werewolves, ghosts, and new student Damian Wayne won’t make it easy! Collects issues #7-12 and the sneak peek story from CONVERGENCE: GREEN LANTERN CORPS #2.

TEEN TITANS VOL. 2: ROGUE TARGETS TP
Written by WILL PFEIFER
Art by KENNETH ROCAFORT, FELIPE WATANABE, IAN CHURCHILL and others
Cover by BENGAL
On sale MARCH 9 • 176 pg, FC, $16.99 US
Superboy has returned, but something’s wrong, and it’s up to the Teen Titans to find out what. On the run with Superboy, the Titans must uncover the truth behind the Boy of Steel’s crimes—or they all might end up serving time with their former teammate. Collects TEEN TITANS #8-12, ANNUAL #1, and the sneak peek story from CONVERGENCE: SUPERBOY AND THE LEGION OF SUPER-HEROES #2

INJUSTICE: GODS AMONG US YEAR FOUR VOL. 1 HC
Written by BRIAN BUCCELLATO
Art by BRUNO REDONDO, MIKE S. MILLER and others
Cover by HOWARD PORTER
On sale APRIL 27 • 136 pg, FC, $22.99 US
In these stories from issues #1-6, it’s the year of gods! Joining the insurgence against Superman, Zeus makes a bid for Earth, bringing the Amazonian Army into the fight. But who will Wonder Woman side with? And, how will Batman take advantage of all this godly interference?

INJUSTICE: GODS AMONG US YEAR ONE – THE COMPLETE COLLECTION TP
Written by TOM TAYLOR
Art by BRUNO REDONDO, MIKE S. MILLER and others
Video game art cover
On sale MARCH 2 • 424 pg, FC, $24.99 US
The first year of the acclaimed prequel to the video game Injustice: Gods Among Us is collected! The world is changed forever when Superman is tricked into destroying the thing he loves most. Now, the heroes of our world must decide if they are with Superman or against him.

BATMAN & ROBIN ETERNAL VOL. 1 TP
Written by JAMES TYNION IV, SCOTT SNYDER and others
Art by various
Cover by TONY S. DANIEL and SANDU FLOREA
On sale MARCH 9 • 288 pg, FC, $29.99 US
Not many years ago, Batman and Robin worked the most disturbing case of their crimefighting careers: bringing down the organization of the human trafficker known only as Mother. At the time, Dick Grayson did not understand the scope of that case, but now its darkest secrets are coming back to haunt him and everyone else who ever worked with Batman! Collects BATMAN AND ROBIN ETERNAL #1-12, plus the eight-page story from BATMAN: ENDGAME SPECIAL EDITION #1.

GOTHAM CENTRAL OMNIBUS HC
Written by ED BRUBAKER and GREG RUCKA
Art by MICHAEL LARK, STEFANO GAUDIANO, KANO and others
Cover by MICHAEL LARK
On sale MAY 4 • 968 pg, FC, $99.99 US
Harvey Bullock, Maggie Sawyer, Renee Montoya and the GCPD are all that stands between order and chaos in Gotham City. It’s up to them to keep the world’s most dangerous criminals off the street, and also to clean up the mess left behind by Batman’s one-man war on crime. Now, the entire 40-issue run of GOTHAM CENTRAL is collected in a single hardcover.

ROBIN VOL. 2 TP
Written by CHUCK DIXON
Art by TOM LYLE, BOB SMITH and others
Cover by MIKE ZECK
On sale MARCH 16 • 360 pg, FC, $24.99 US
As Tim Drake settles in as the new Robin, he must deal with the newly escaped Joker, and team up with the Huntress to face the power of the KGBeast. Collected from ROBIN II #1-4 and ROBIN III: CRY OF THE HUNTRESS #1-6!

SUPERMAN/BATMAN VOL. 3 TP
Written by MARK VERHEIDEN and JOE KELLY
Art by KEVIN MAGUIRE, ETHAN VAN SCIVER, MATTHEW CLARK, PAT LEE and others
Cover by ED McGUINNESS and DEXTER VINES
On sale MARCH 30 • 296 pg, FC, $19.99 US
In these stories from SUPERMAN/BATMAN #27-36 and ANNUAL #1, the Martian Manhunter attacks Batman! The Parasite and Titano return! Superman’s allegiances are tested in a story involving the Green Lantern Corps and more! Plus, a tale from the days before Superman and Batman were a team—and Deathstroke was gunning for Bruce Wayne!